New Delhi: Don Bosco Ashalayam is a squat, three-storey concrete building at the end of a potholed road in the heart of Vikaspuri, west Delhi, that serves as a sort of community and job training centre for Myanmarese refugees in the Indian Capital.

In several rooms on the ground floor of the building, a few dozen men and women kneel on blue plastic mats, deftly weaving cheery white-and-red children’s sweaters. In other rooms, women stitch tunics amid the whir of sewing machines and weave traditional designs on bright bits of cloth, which will be collected and sold in a wholesale market. 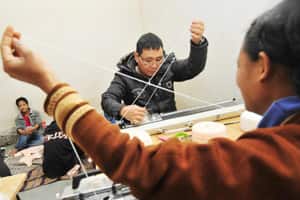 Adapting for survival: A refugee, Khoi Sian Pau weaving at the Don Bosco Ashalayam in Vikaspuri, Delhi. The centre provides services such as vocational and language training, counselling and job placement to Myanmarese refugees in the Capital. Photo by Ramesh Pathania/ Mint.

Short-statured, with a round face, high cheekbones, silvering black hair and dark, almond-shaped eyes, Pau could easily blend in with people from north-eastern India or Nepal, although he speaks very little Hindi and no English. He tells his tale through an interpreter, without a flicker of expression animating his broad, deeply lined face.

It took Pau 28 days to reach Delhi after his escape from Yazu Jail—a labour camp on the outskirts of a small village in Myanmar, where he was sentenced to 14 years of hard labour in 2002. The tailor was thrown in jail shortly after soldiers learnt he had (at a client’s request) sewn a badge onto a jacket representing Aung San Suu Kyi’s National League for Democracy. For this transgression under the country’s military regime, Pau was sentenced to 14 years of hard labour. He served four gruelling years as a prisoner, building railroads, before he managed to escape, fleeing into the surrounding woods when the guards were distracted. He fled to the village that had been his home, borrowing clothes and money from friends, before making his way on foot—mostly at night to avoid detection—to the border, where he crossed into India and eventually met his family in Delhi, where they had fled in the year following his imprisonment.

“Going back is not an option," Pau says, dropping his eyes to inspect the frayed cuffs of his dusty brown slacks. “They will certainly kill me."

That was six years ago. Today, he is one of more than 7,500 Myanmarese refugees and asylum seekers living in Delhi, although New York-based non-governmental organization Human Rights Watch estimates that there may be as many as 100,000 unregistered Myanmarese living in the north-eastern states of Manipur and Mizoram, to which the office of the United Nations High Commissioner for Refugees (UNHCR) is barred access.

Although Myanmarese have been coming to the country in growing numbers since the early 1990s, they face a multitude of challenges, including the language barrier, discrimination and poverty, that make true assimilation difficult.

Many of Delhi’s Myanmarese refugees such as Pau earn a livelihood by weaving, sewing, knitting or making paper plates at Don Bosco Ashalayam, UNHCR’s on-the-ground partner in Delhi, which provides services such as vocational and language training, counselling and job placement. Others find work in local factories or take jobs on daily wages.

Of all the refugee groups living in India, the Myanmarese seem to be the most vulnerable, says Selin Mathews, project manager of Don Bosco Ashalayam. “Afghan refugees—most of whom are Hindus or Sikhs—have a lot more in common with Indians," she says. “Lack of education, poverty and language barrier make it tough for Burmese refugees to survive when they arrive in New Delhi."

While everyday life is still a struggle, some Burmese immigrants have found hope within their small community in by lanes of Delhi.

There have been changes in Myanmar in recent months. A military-backed civilian government was installed in the country last year after elections in November 2010—the first in two decades. Nobel Peace laureate Suu Kyi, who spent 15 of the past 21 years in jail or under house arrest, was released a week after the polls.

Suu Kyi on Monday called for a new era after her National League for Democracy rejoined the political system and claimed victory in 43 of 44 seats it contested in Sunday’s by-elections.

After the military junta, or the State Law and Order Restoration Council, took power in Myanmar in 1988, more than one million Burmese refugees fled to neighbouring countries. Most refugees living in India belong to the Chin ethnic minority who were subjected to harassment, torture and imprisonment by the military junta.

Yung Ayun Sing—slight, pretty and birdlike—is a 35-year-old former elementary school teacher who fled her small village after soldiers threatened her of torture and imprisonment when she refused to publicly support a memorandum issued by the junta. She spent several months in hiding, living in secret in a schoolhouse where a fellow teacher taught before she was able to flee to India.

A third—also a tailor like Pau—fled after several members of his family were captured and tortured by local soldiers when they refused to host a soldier in their home for the night.

But life in India is not easy. According to Achan Mungling, an activist who works with Myanmarese refugees, many Myanmarese experience discrimination and abuse by the local population. “In Delhi, almost every day there is some case of a Burmese getting beaten up by an Indian," she says. “People take advantage of them because they know they won’t go to the police to file a claim—because they can’t speak the language."

Unable to secure work permits, even the most educated of the lot are relegated to work in the informal sector, in which jobs can be difficult to secure due to cultural differences and the language barrier.

“There’s a lot of competition from rural (Indian) migrants," says Mathews. Many employers prefer to hire Indians as they speak the language and are ready to work overtime. “The work situation for Burmese is a constant challenge."

The vulnerability of Myanmarese staying in India is compounded by the fact that India has not signed the 1951 Refugee Convention or the subsequent 1968 protocol—generally accepted as the standard for international refugee law—nor does it have any official national refugee policies. While some groups (such as Tibetans and Sri Lankans) are recognized by the Indian government as refugees and provided with aid, others (like the Myanmarese and Afghans) are not.

As a result, the Myanmarese are unable to secure legal documents—residential or employment permits—needed for proper assimilation. Nor has India always welcomed asylum seekers from the troubled neighbour: While India initially set up refugee camps to accommodate people fleeing the country after a 1988 democratic uprising, that support was short-lived. In 1994, India expelled anywhere between 1,000 and 10,000 asylum seekers back to Myanmar, according to New York-based advocacy group Refugees International.

“You have to take into consideration that India can barely take care of its own citizens," says Mungling. “So to take care of citizens of other countries is difficult—so they’ve dealt with refugees in what seems like a tough manner." But Mungling is quick to add that while India may not be providing direct support to the Myanmarese, the government is not deporting them either.

Pau tried for months to find a daily-wage job in the city, but his inability to communicate or adapt to Indian culture proved to be a barrier. Don Bosco Ashalayam is the only place he was able to get a job. “I am too old to learn a new language. Out there," he gestures vaguely in the direction of the window, “they do not understand me. I would not last."

For his labour, Pau earns less than ₹ 5,000 per month—barely enough to maintain the tiny one-room flat he shares with several other refugees, and his son. He says that he tries his best not to think about the past or the future.

“Every day is hard," he says, taking off his spectacles, with a long sigh. “Money is not enough. We cannot go back, they will kill us, but with what we are making, we cannot survive here for a long term."

This is the third of a 10-part series that profiles foreign communities that are contributing to India’s cosmopolitan culture.

Next: Afghani immigrants’ struggle to retain culture and heritage

Fleeing from their own shadows