“The programme was marred by problems in implementation," minister Raghuvansh Prasad Singh said on Tuesday after a meeting at his ministry that decided to bring all districts in the country under the scheme.

He, however, added that “the programme will be free of all problems and difficulties by the end of this financial year (2008-09)". 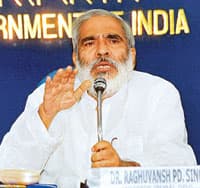 The minister sought to play these down, saying they were “only aberrations due to some local problems."

India’s largest ever welfare programme began on 2 February 2006 in 200 poorly developed districts after Parliament passed the National Rural Employment Guarantee Act (NREGA) in 2005, which provides a legal guarantee for 100 days of employment in every financial year to adult members of any rural household willing to do unskilled manual work at the statutory minimum wage.

The government on 15 May 2007 added 130 districts to the scheme. Including the remaining 266 districts now completes the coverage.

“On an average, each household was provided 40 person days of employment, with the total coming to 122 crore person days of work," the minister said.

The CAG, which studied the performance of the scheme in 68 districts of 26 states, reported irregularities such as diversion of funds and mention of work that did not exist, and lack of proper reviewing and oversight mechanisms.

The auditor’s report had also mentioned non-implementation of various procedures by state governments, including delays in setting up state employment guarantee councils and commissioners, embezzlement of funds, and non-achievement of employment objectives.

“The lack of adequate administrative and technical resource support at the district, block (sub-district) and GP (gram panchayat or village council) levels adversely affected the smooth and effective implementation of NREGA," CAG’s report, released in January, had said.