New Delhi: Inflation based on the Consumer Price Index (CPI) has decelerated to a record low since the index was launched in January 2012, even as factory output growth continues to be flat, increasing pressure on the central bank to cut interest rates earlier than it would have wanted to.

CPI-based inflation eased for the second month in a row to 6.46% in September, compared with a downward revised 7.73% a month ago, driven by lower price increases in food and fuel items. A Reuters poll of 28 economists had predicted retail price inflation in September at 7.2%.

The Index of Industrial Production (IIP) rose 0.4% in August, unchanged from July and down from 3.94% in June, data released on Friday showed. JPMorgan cut its India gross domestic product (GDP) growth projection for 2014-15 to 5.1% from 5.3% after the factory output data was released.

“IP (industrial production) debacle is the straw that breaks the camel’s back," JPMorgan said in its 10 October report.

Weak factory output growth in the past two months has dampened some of the optimism and enthusiasm that followed the ascent of the Bharatiya Janata Party to power with a decisive mandate in the April-May general election.

In the year to next March, the government expects the economy to grow 5.8%, and is counting on a revival of investments and big-ticket infrastructure projects.

The Reserve Bank of India (RBI) left its policy rates unchanged last month, citing high retail inflation and reiterated its resolve to bring down consumer price inflation to 6% by January 2016.

The continuing decline in crude oil prices may cause a further fall in retail inflation.

The ministry of petroleum and natural gas said in a statement on Monday that the international crude oil price of Indian basket as computed by the petroleum planning and analysis cell was $88.23 per barrel on 10 October, compared with $90.50 per barrel on the previous publishing day of 9 October.

Slower growth and the fall in oil and commodity prices increase the chance for RBI to attain its challenging 6% consumer price inflation target by January 2016, JPMorgan said.

The International Monetary Fund last week said that monetary normalization in India should proceed gradually, given the high level of inflation in the country.

“In India, with recent monetary tightening, disinflation should continue, but inflation overall will remain high at 7.8% in 2014, declining slightly to 7.5% in 2015," IMF said in its report.

The inflation moderation is on the back of a significant statistical base effect, which should continue till November, said Rupa Rege Nitsure, chief economist at Bank of Baroda and a member of the RBI panel on monetary policy framework.

“RBI will likely be looking for a durable reduction in inflation and will monitor the inflation trajectory for four-five months after December before taking a call on cutting rates. As such, a prolonged pause can be expected from the RBI," she said. 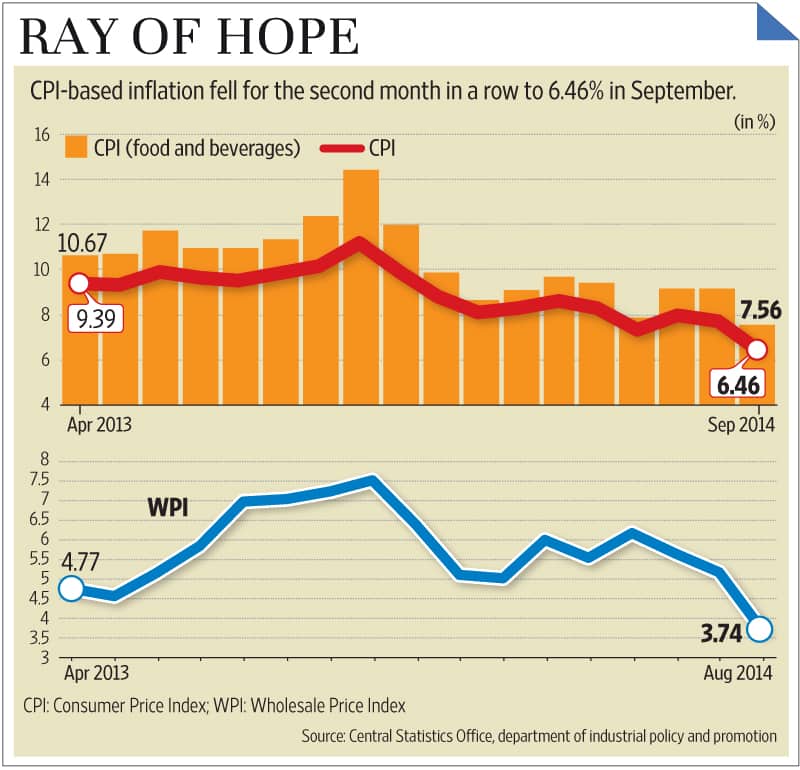 Encouragingly, core inflation, or non-food and non-fuel price inflation, slowed to 5.9% from 6.9% in August, suggesting that demand-driven price pressures are weakening.

Advance estimates for food production indicate substantial shortfalls in production of various kharif crops in 2014 as compared with 2013, according to Aditi Nayar, senior economist at Icra Ltd; these include pulses (14%), coarse cereals (14%) and oilseeds (12%), all of which point to the risk of hardening food prices in the near term.

In a working paper on food inflation published on its website, RBI said empirical evidence shows that increasing real rural wages have played the most dominant role in determination of overall food inflation in India in the long-run.

“Though statistically significant, the long-run impact of hikes in MSP (minimum support price) of food crops, namely, rice and wheat and input cost inflation (except wages) on food inflation were not as over-bearing as was generally perceived. Similarly, the long-run impact of protein expenditure on food inflation, though significant statistically, was found to be weak," it said.

MSP is the price at which the government sources foodgrains from farmers for the public distribution system.

RBI also ruled out any significant impact of the Mahatma Gandhi National Rural Employment Guarantee Scheme (MGNREGS) on food inflation. MGNREGS provides at least 100 days of manual labour every year to one member of every rural family.

“Reducing the supply-demand gap in agriculture production in the long-run and improving supply logistics will be of utmost importance for moderating food price pressures and for sustaining the pace of economic activity by securing adequate food availability at reasonable prices," it added.
Anup Roy in Mumbai contributed to this story.