India’s council of ministers: From Nehru to Modi

Ever since Narendra Modi became the Prime Minister of the country, he has drawn comparisons with several world leaders as well as with several past Indian prime ministers including Atal Bihari Vajpayee and Indira Gandhi. How does Modi’s council of ministers compare with those in the past?

Using a unique database sourced from Gilles Verniers, a political scientist at Ashoka University, Mint analysed the composition of the Union council of ministers since the time India became a republic. Given data limitations, it was not possible to examine the historical trends in educational qualifications and wealth levels of ministers. However, as the accompanying charts illustrate, it is possible to get a fair idea about the extent of diversity in India’s council of ministers from 1952 till now. Diversity today is a highly sought-after attribute in boardrooms and in organizations across the world. Diversity is perhaps even more important in democratic politics to ensure that the voice of the majority does not turn into majoritarianism.

When it comes to regional diversity, the current crop of ministers appears to have a mixed record. The number of states represented in Modi’s council of ministers, at 20, is slightly above the historical average of 17 (since 1952). However, the shares of the largest state, Uttar Pradesh, as well as the share of the top three states in terms of ministerial representation, have risen sharply in 2014, as the chart on regional concentration of power shows.

Historically, both Scheduled Castes (SCs) and Scheduled Tribes (STs) have had low representations in the union ministerial council. Although their shares have risen marginally in recent years, their representation is still below their respective shares in the population. Among major social groups, tribals have had the poorest representation in Indian history. The number of states represented in the Union council of ministers saw a sharp increase after Indira Gandhi faced a challenge from a syndicate of regional satraps within the Congress in the mid-1960s. P.V. Narasimha Rao’s council of ministers had the greatest regional diversity in the history of the Indian republic. The share of Uttar Pradesh, India’s largest state, in the Union council of ministers had been falling steadily since 1989, but has now scaled a 25-year high, after the Narendra Modi-led government stormed to power on the back of an impressive victory record in the heartland state. The share of the the top three states in the Union council of ministers has followed a similar trajectory.

Maharashtra is the only state to have been consistently among the top three states in terms of ministerial representation since 1999. 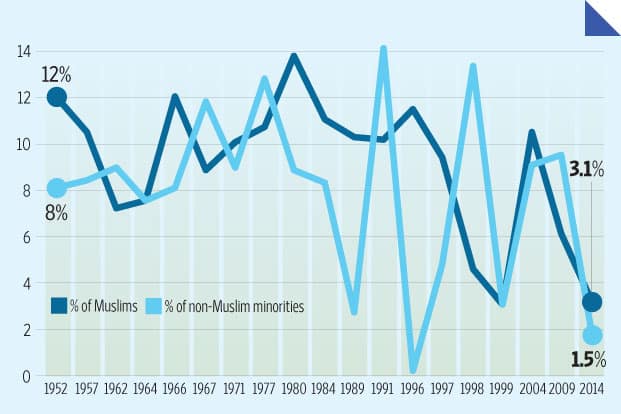 The proportion of Muslims as well as non-Muslim minorities in the Union council of ministers has been declining since the late 1980s, when the Ram Janmabhoomi movement began, and the BJP gained in ascedancy. Although there have been heavy swings in the representation of minorities over the past quarter century, the broad trend has been downward since then. The average ratio of Muslims in the Union council of ministers from 1952 to 1989 was 10%, which has fallen 3 percentage points since then. The average ratio of non-Muslim minorities in the post-1989 era has fallen 1.6 percentage points to 6.9%. 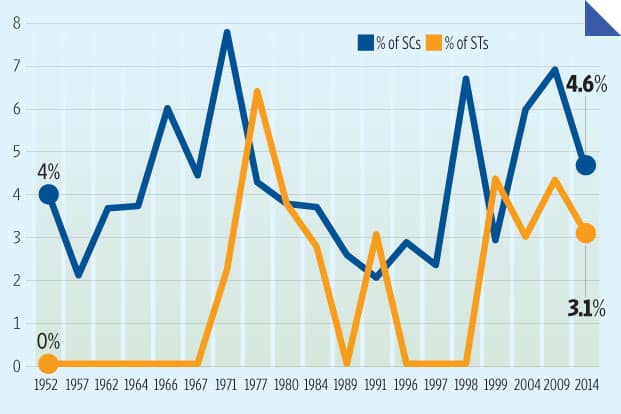 THE LONG MARCH FOR WOMEN 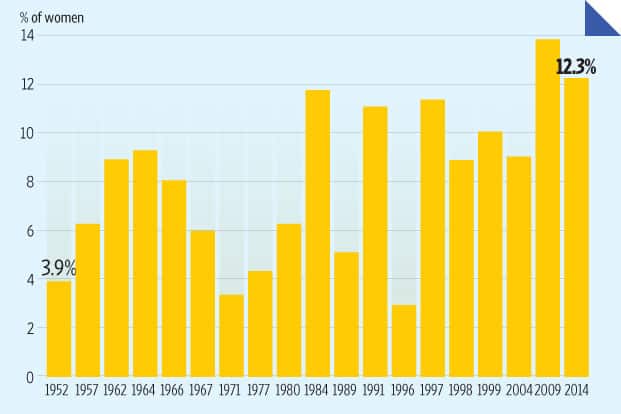 Women have had far greater representation in recent ministerial councils than they did in the early years of the republic, although it is still much below the half-way mark.