Economic development seems to have accentuated India's patriarchal vices and might worsen the gender imbalance in population, according to latest data

Speaking at a function to celebrate 50 years of Haryana’s formation, Prime Minister Narendra Modi lauded the state for being a leader in improving the gender ratio in the country. Latest data on sex ratio at birth (SRB) shows that Haryana is among the worst performers in the country on this count. SRB measures the number of female child-births per thousand male child births.

Although Haryana did see a small improvement in its SRB from 864 to 866 between 2011-13 and 2012-14, it is far behind states such as Madhya Pradesh, Kerala and West Bengal, which are not only ahead of Haryana, but have also registered larger improvements in their SRBs during this period.

What is even more worrying is the fact that the problem is not a limited to one state. A look at Sample Registration System (SRS) data shows that India faces the risk of the frittering away the limited gains it had achieved in improving its abysmal SRB. Between 2005-07 and 2011-13, this number had improved from 901 to 909, and has fallen to 906 in 2012-14, the latest period for which data is available.

How bad is the gender-bias in India’s child birth compared to other countries? According to the World Health Organization (WHO), the number of male children born per female child should not exceed 1.05. The marginal difference is to make an allowance for that fact that men face higher fatality risks due to both natural factors as well as causes like accidents and war casualties etc. United Nations data for 2010-15 shows that out of 191 countries, only 109 meet the norm of male births being less than or equal to 1.05 for each female birth. China is the worst country on this count with 1.16 male births per female birth. India is ranked 188 in the list with 1.11 male births per female birth. There is significant regional diversity on this count among India’s states. For example, states such as Uttar Pradesh, Haryana and Punjab compare to Azerbaijan, which comes after China in terms of high male births per female birth. On the other hand, states such as Kerala and Chhattisgarh are above WHO norms and can be compared with countries like South Africa and Kenya. 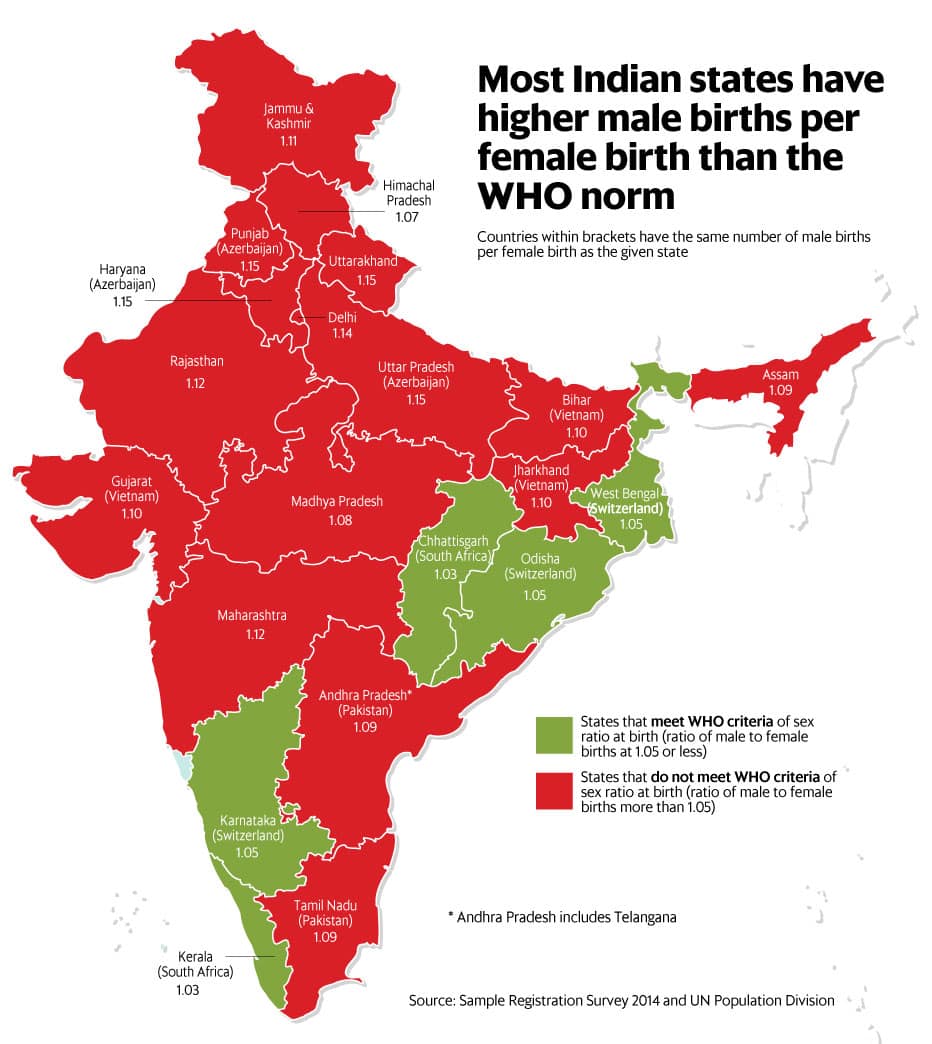 What makes the latest decline in SRB alarming is the fact that it can adversely affect the recent improvement in India’s overall sex ratio, which is defined as the number of women per thousand men. After suffering a declining trend from 1901 to 1991 census, it has shown some improvement in the 2001 and 2011 censuses. A look at overall life expectancy for men and women and SRB throws more light on the reasons for this trend.

Until 1975-80, men had a higher life expectancy in India than women, which was probably the reason for their higher share in population.

However, even after catching up and finally gaining over men in life expectancy, the share of women did not show any improvement until the 2001 census.

This can probably be explained by the fact that SRB started declining from the 1970s, probably due to use of pre-natal sex determination techniques.

What acted as a double whammy is the fact that the average girl child also faces a higher chance of mortality, given the higher female infant mortality rate in comparison to that for male children. The gap has been interpreted as “a reflection of the society’s preference for male child and consequent attention given to their day to day care, nutrition and medical & other facilities for the male infants".

While the criminalization of pre-natal sex determination in 1994 might have helped in the improvement in SRB in recent times, the latest decline shows that the law is being flouted by many. This can be seen from the fact that most states have a much lower SRB for second order birth when the first child is a female in comparison to the SRB when first child is a male. This phenomenon has also been highlighted by researchers. For example, a 2006 paper authored by Prabhat Jha and others in British medical journal Lancet showed that SRB kept declining with higher birth orders if the earlier births were female. On the other hand, SRBs were almost same when the preceding child was a son. What is even more disturbing is the fact that SRB tended to deteriorate with an increase in education level for women, suggesting that prosperity promotes son-preference and female infanticide.

Tulsi Patel, a professor of sociology at the Delhi School of Economics, says that although families have become smaller, son preference has not declined, and this is leading to educated families opting for sex selective abortion. “Parents feel that while a girl needs a similar level of investment as a boy, there are greater risks with raising a girl child, be it the fear of violence, or the persistence of customs like dowry," Patel added.

Ensuring gender balance in population is not just about saving men the trouble of finding wives. A lot of research shows that societies with an unfavourable ratio of women in their population tend to be more violent and unstable.

In a 2000 article published in the Population and Development Review, economists Jean Dreze and Reetika Khera analyzed district-wise crime data to show that there was a strong correlation between murder rates and gender balance of population. Districts with higher female-male ratio depicted a lower murder rate, Dreze and Khera found.

However, the causality could be in the reverse direction as well. In a 1992 article published in the Economic and Political Weekly Columbia University political scientist Philip Oldenburg argued that districts with higher than median murder rates in Uttar Pradesh might be averse to having girl children out of the belief that sons would be more suited to defend themselves.

The writing on the wall is clear. Economic development seems to have accentuated India’s patriarchal vices and might worsen the gender imbalance in population. It would take a big socio-political effort to ensure that India does not beat China, the world’s worst country in terms of SRB, in the near future.