New Delhi: At Delhi’s IT Park, two huge office blocks rise from the marshland of the Yamuna’s eastern bank. From here, the staff of Genpact Ltd, business process outsourcing (BPO) firm, provide accounting, analytics and customer services to businesses all over the world. But while their professional focus is international, these employees also represent an important new source of philanthropic giving at home, through the monthly donations many of them make to a payroll scheme.

Payroll givers represent a relatively new demographic of philanthropists, but one that will become increasingly important over the next few decades as India’s middle class continues its march towards prosperity. They are typically younger than private donors (starting from about 20 years old) and earn rather less, from Rs10,000 per month, according to Dhaval Udani, chief information officer at GiveIndia, a facilitator organization that links donors to charities.

Most are white-collar workers in private sector companies (frequently BPOs), which adopt the scheme as part of their corporate social responsibility (CSR) programmes. “They are very forthcoming and generous as a percentage of their salaries," said Udani. Udani estimates that payroll giving now accounts for roughly 40% of the total money raised by GiveIndia.

A report on Indian philanthropy by Bain and Co. Inc this year found that although the wealthiest sector of society is growing at an average rate of 11% annually since 2000, this group is not the most prone to giving. Aside from a small number of ultra-rich philanthropists who have set up their own charitable trusts and foundations, the very rich are generally outdone by the middle and upper-middle classes.

Also See Other stories in the series

Deepa Kapoor, global CSR leader at Genpact, said that 22% of the company’s Indian operations is enrolled in the programme. “The average ticket size is Rs150 per month, which goes to show that 80% of the donors are the young new employees who want to give but can’t give too much," she said.

Arvind Parashar, an assistant vice-president at Genpact and a donor to the payroll scheme, said his team members are attracted by the ease and accessibility of the GiveIndia model. “Everybody gives differently," said Parashar. “My interests lie in causes like child education, or the floods in Ladakh. I’m close to those causes."

Through GiveIndia, donors log on to a website and choose a specific area or cause. The money accumulates in individual accounts, and the donors can distribute it as they wish.

“In the past few years, the middle-class strata has grown," said Parashar. “These are people that believe in spending a lot, and now they are getting interested in philanthropy." 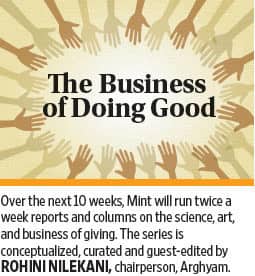 What starts as passive giving can become a more sustained interaction. At Mastek Ltd, an information technology company based out of Mumbai, 60% of the workforce contributes to the company’s seven-year-old payroll scheme. Sanjay Mudnaney, assistant general manager of corporate communications, said the company decided against using a facilitator organization such as GiveIndia because it wanted a more direct engagement with their chosen beneficiaries. “We chose 20-25 charities and went to see what they did," he said.

At Sampradan, another Delhi-based facilitator organization, Moijuddin Ansari said 70% of funds come from small payments. “The people who are earning very little are the real philanthropists," said Ansari. “They are the ones giving meaningful amounts. One donor to us was selling bread out of a cycle rickshaw, he was earning ₹ 50-60 a day, and was still able to give something. This is remarkable."

Vidha Vig, a Genpact employee who gives via the payroll scheme, sees it as an extension of the more traditional donations a person might make to a temple or a homeless person. “We are all busy in our personal lives, and it’s an easy way to make a difference," she said.

Now, Vig gives through the scheme to support a slum community in Malviya Nagar, at which she also volunteers on Saturdays. It’s part of a holistic approach to philanthropy. “We are all engaged in our professional lives and we work six days a week," said Vig. “I don’t have time to go to the temple, but now I’m engaging professionally in giving."

Respond to this series at doinggood@livemint.com