Investment plan of Rs8.5 trillion envisaged over five years, which could have a multiplier effect on economic growth

New Delhi: No new trains. No increase in passenger fares. As consumer-centric as it gets. Four goals. Five drivers. Eleven thrust areas. That is the top line of the first railway budget presented by Suresh Prabhu on Thursday.

It is a budget that is at once pragmatic and visionary. It is one that has the potential to be transformational—by increasing capacity and improving technology on the supply side, improving quality of service on the demand side, and focusing on transparency and efficiency on the operational side.

The rail budget envisages an investment plan of ₹ 8.5 trillion over the next five years. If successful, this could have a multiplier effect on everything from the fortunes of steel companies to the country’s ability to attract foreign interest in railways and boost the government’s ambitious Make in India programme.

Prabhu’s budget factors in a 52% increase in plan size, targets the best operating ratio (the lower the ratio, the better is the Railways’ ability to use internal resources to fund its plans) in nine years and, most importantly, broadly describes where it hopes to get the money from.

Sure, a significant portion of the money will come from debt raised by new holding companies or by railways-owned entities but, at least on paper, this should be possible given the overwhelming interest in India at this point in time and the government’s larger imperative of ensuring the creation of a deep debt market if it wants to improve infrastructure and kickstart the investment cycle.

Challenges remain—from executing a transformative plan to more mundane ones such as stopping the slide in the share of freight transported by rail. But like they say, anything well begun is half done.

Still, the budget has laid out a clear track to growth. This rail budget, the second by the National Democratic Alliance in its present avatar, reflects Prabhu’s reputation for planning and detail.

He explained in his speech in Parliament on Thursday that he started off with a white paper, detailing the challenges before Railways, the consequences if these were not addressed and the solutions. The rail budget itself is the first operational step, he added. Soon, his ministry will release a Vision 2030 document, said Prabhu.

The budget sets out a five-year action plan that is based on the principle that fundamental to Railways’ turnaround is enhancing its capacity and generating the resources to fund it.

The government has begun well by earmarking ₹ 1 trillion in total plan outlay, a 52% jump over last year’s plan. The budget envisages an investment plan of ₹ 8.5 trillion over the next five years.

The larger piece of the railway’s resources will be channelled into building capacity and modernizing its infrastructure that in turn will help improve its efficiency.

Though the annual plan outlay marks a big jump from last year, Prabhu hopes to get nearly 42% of it, or around ₹ 40,000 crore, from the central government, generate ₹ 17,800 crore internally (a 16% increase over last year), use Railways’ financing arm IRFC (Indian Railway Finance Corporation) to raise ₹ 17,000 crore through market borrowings and another ₹ 17,000 crore from alternative sources of funding; it will raise ₹ 6,000 crore through so-called public-private partnerships.

Rational allocation of resources continues to be the National Democratic Alliance government’s mantra—prioritizing completion of key pending projects that are estimated to require ₹ 2 trillion, according to the white paper.

Further, the minister has conducted an exercise to put Railways’ limited resources to optimal use.

“In the next five years, our priority will be to significantly improve capacity on the existing high-density networks. Improving capacity on existing networks is cheaper. There are no major land acquisition issues and completion time is shorter. The emphasis will be on gauge conversion, doubling, tripling and electrification. Average speed will increase," he said.

“The priority for undertaking projects has been determined by a designated committee for capacity enhancement, revenue generation and decongestion. Negotiations are on with financial institutions for funding of these projects through extrabudgetary resources," he added.

The minister said 77 projects, covering 9,400km of doubling, tripling and quadrupling works along with their electrification, had been sanctioned at a total cost of ₹ 96,182 crore, in addition to fast tracking work on 7,000 km of such work.

A.K. Mittal, chairman, railway board, said, “65% of the six major corridors are choked."

The minister did not announce new trains, saying a review for determining their feasibility is underway.

The consumer is king (and queen)

Consumers won’t have to pay more for rail travel—at least, not yet. But they can expect a lot more. Prabhu’s budget emphasized faster and convenient ticketing, cleaner stations and toilets and a technological upgrade, both for safety and better services.

The budget made a 67% higher allocation for passenger amenities. It proposes to add more general class coaches, plans to engage professional agencies for cleaning stations, provide 17,000 bio-toilets in trains and wi-fi facilities in some stations.

A proposal for developing satellite railway stations to decongest railway terminals in major cities has also been made.

The budget says it will try to make train travel safe, especially for women, by installing surveillance cameras in coaches.

“We are launching initiatives that will systematically address customer concerns about cleanliness, comfort, accessibility, service quality and speed of trains," Prabhu said. 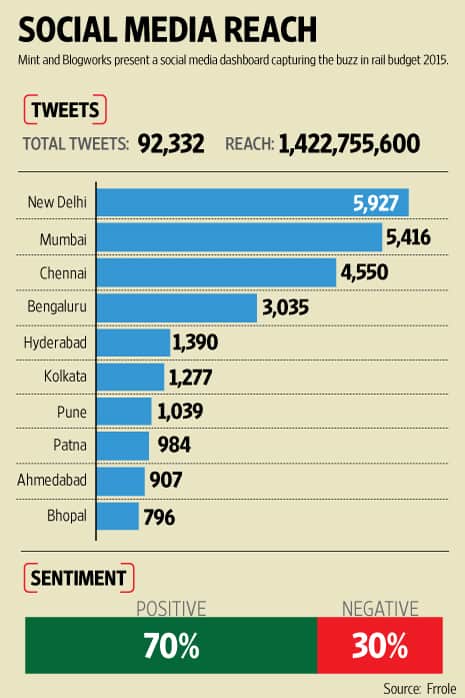 The budget has sought to address issues that have affected private participation in the sector.

Prabhu announced a complete revamp of the PPP mechanism and proposed a regulator to ensure transparency and accountability (the regulator is also expected to set tariffs).

“Initially it was contemplated to set up only a tariff regulator; however, it is now proposed to set up a mechanism which will be entrusted with making regulations, setting performance standards and determining tariffs. It will also adjudicate on disputes among licensees, private partners and the ministry, subject to review in appeal," Prabhu said.

The budget also mentions a review of the wagon leasing scheme, special freight train operator scheme, private freight terminal scheme and liberalized wagon investment scheme to make them more liberal and attractive for the private sector. All these have been longstanding demands of the industry.

The budget aims to channelize most of the PPP participation for improving its freight business. It has been losing traffic to roads and will focus on the construction of feeder routes to the dedicated freight corridor and set up a Transport Logistics Corporation of India to develop user facilities and provide end-to-end logistics solutions. Freight rates were increased by an average 3% across commodities.

“The railway minister has presented a very ambitious and promising budget with significant emphasis on addressing the needs of passengers and improving freight services," said Banmali Agrawala, president and CEO of GE South Asia.

“The focus on finding innovative solutions in both technical and financing aspects, to enhance existing infrastructure, mobilize resources, use new technologies that transform customer experience and increase operational efficiency are steps in the right direction," he added.

“The partnership with states and the private sector in execution of the projects holds great promise. The efforts towards building dedicated freight corridors, bringing in advanced technology in locomotives are key steps in achieving the ambitious freight target of 1.5 billion tonnes capacity. We are hopeful that the timely execution of these projects will transform the Indian Railways."