Is privacy a fundamental right? Supreme Court to decide today

New Delhi: A nine-judge Supreme Court bench will decide whether Indian citizens have the right to privacy under the Constitution—a question that cropped up in the context of legal challenges to Aadhaar unique identity number.

“We are of the view that it should be referred to a nine-judge bench. At this stage, it is essential for us to define if the right to privacy is a fundamental right under the Constitution or not," a five-judge bench headed by Chief Justice J.S. Khehar said on Tuesday.

Privacy rights activists argue that personal data gathered under the government’s Aadhaar programme, aimed at giving a unique, biometric 12-digit identity number to every Indian, is vulnerable to abuse. Then attorney general Mukul Rohatgi told the Supreme Court in 2015 that Indian citizens don’t have a fundamental right to privacy under the Indian Constitution—an argument he repeated subsequently.

Once the privacy question is settled by the nine-judge Constitution bench, the remaining issues related to Aadhaar would be heard by a smaller bench. If the large bench were to decide that Indian citizens indeed have the right to privacy, the smaller bench will define the scope of that right.

To address the privacy question, the nine-judge bench will have to examine and determine if past precedents holding that privacy is not a fundamental right under the Constitution are acceptable today. 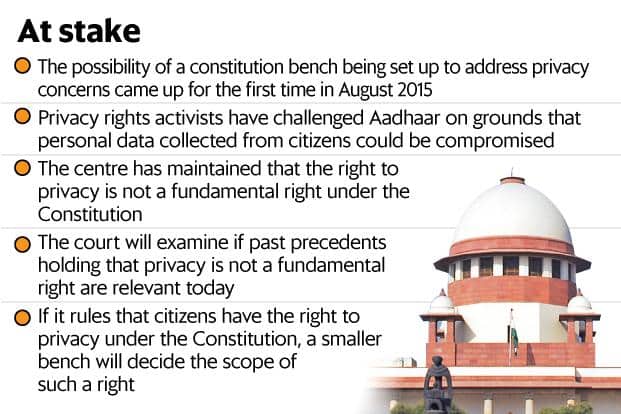 “Are those (precedents) constitutionally correct (in their entirety) or would they have to be re-examined, that needs to be seen," justice Khehar said in an oral order, citing two old cases.

Attorney general K.K. Venugopal told the court that the issue before the courts was restricted to the binding nature of past precedents and that there would be cases where they may not be binding.

In a case dating back to 1954, relating to the search and seizure of documents by the police, a majority ruling held that the right to privacy was not a fundamental right under the Constitution and that the police action amounted to “temporary interference for which statutory recognition was unnecessary".

In the second case cited by justice Khehar, in which the petitioner argued that state surveillance violated fundamental rights, the court ruled in 1962 that “privacy was not a guaranteed constitutional right". It, however, held that Article 21 (right to life) was the repository of residuary personal rights and recognized the common law right to privacy.

“For all practical purposes, the court setting up a nine-judge Constitution bench will once and for all settle the tricky question of privacy and the number of judges suited to hear it. It will clear all the cobwebs surrounding the privacy issue," said Alok Prasanna Kumar, a lawyer and visiting fellow at think tank Vidhi Centre for Legal Policy.

Apart from grounds of infringement of privacy, activists have challenged the mandatory use of Aadhaar for delivering social welfare benefits and for filing of income tax returns as well as for obtaining and retaining the personal account number necessary for filing tax returns.