New York: Hers was the quiet departure that hit like a thunderclap. In an administration that’s come to resemble a cross between a comic operetta and a cowboy movie, Nikki Haley was both an elegant misfit and a sober source of reassurance. Her resignation on Tuesday from America’s ambassadorship to the United Nations prompted a nationwide speculative huddle in a period of political mayhem.

In a matter of hours, all talk turned from Brett Kavanaugh and his acrimonious elevation to the United States Supreme Court toward Haley’s assertion that she just wanted a break from public service after two years at the U.N. If President Trump had wanted a way to take America’s fevered mind off Kavanaugh, he couldn’t have designed a distraction niftier than an unscheduled morning meeting with Haley at the White House, followed by her resignation.

Minds everywhere began to whir. Could Haley’s own explanation for her parting be taken literally, or was it the typically euphemistic blather of a politician with other motives? The Republican Party, to which she belongs, reacted with incomprehension, even as opponents of President Trump—of whom there is no shortage in America’s media—plunged forward with explanations for Haley’s decision to leave. Was it a demonstration of intent to run for president in 2020, some wondered? Her ratings are high, even among Democrats, and she has long been seen as a plausible candidate for the White House. Quitting now would allow her two Trump-free years in which to burnish an independent image, and distance herself from the Great Shitshow in Washington.

Speculation ran in plenty of other directions. Was she signalling her disapproval of Trump’s latest Supreme Court pick, a man tainted in many eyes by allegations of sexual impropriety? Was she leaving her job in pre-emptive self-protection, given the contention by some Washington watch-dogs that she had accepted too many free rides on private planes from businessmen in South Carolina (her home state)? Was it a question of personal debt—credit cards, mortgages, and other humdrum financial burdens—that drove her to leave a job that pays sarkari peanuts for a more remunerative gig in the private sector?

There’s also conjecture that she may want the Senate seat that could be vacated in South Carolina if Lindsey Graham, the sitting senior senator from that state, moves to Washington as President Trump’s attorney-general after the mid-term elections next month. This explanation is the hardest one to swallow, as it’s difficult to believe that Graham would abandon a rock-solid seat he could occupy for the rest of his livid life for a possibly fleeting post in a cabinet that’s always on the verge of combustion.

So, let us do something startling, and take Haley’s words at face value—until we know more. For if her political record reveals anything, it is that she is measured and sane, not rash and mercurial. She is also unquestionably ambitious, but hers is an ambition rooted in sobriety. She is only 45 years old. If Trump is a solid bet for a second term—and right now he looks unstoppable, given the jaw-dropping dysfunction in the Democratic Party—she will bide her time. She will be only 52 in 2024, 56 in 2028.

Haley was, by most measures, a success as U.S. ambassador to the U.N. Her elevation to the post was greeted with celebration in India, a land that lauds the successes of “its own people" abroad more lustily than most other places. The daughter of Sikh immigrants to the United States, she has always acknowledged her Indian roots in the clearest terms. In her testimony before the U.S. Senate after her nomination to the U.N. post, she said “my father wore a turban, my mother a sari."

It has long been fashionable in desi circles in the U.S.—America’s Indians vote largely Democrat—to criticise Haley for her politics, for her unabashed conservatism and her embrace of the Tea Party, a grassroots movement that has sought to push the Republican Party further to the right. Many Indians, regrettably, also find fault with her for her conversion from Sikhism to Christianity, forgetting that freedom of religion is a personal right in the United States (where no odious laws exist that regard religious conversion as anathema).

Haley is often pilloried by Indian cultural absolutists for changing her name, even as they forget that as a married woman it was perfectly natural for her to switch from Miss Randhawa to Mrs. Haley. As for her adoption of Nikki over Nimrata, her given name, no comment is necessary other than that America is still a land where assimilation is the norm, and where people believe that it is better to fit in than to stand out. (Besides, there are probably many more Nikkis in Jalandhar or Patiala than there are in Bamberg, South Carolina, the town of Haley’s birth.) 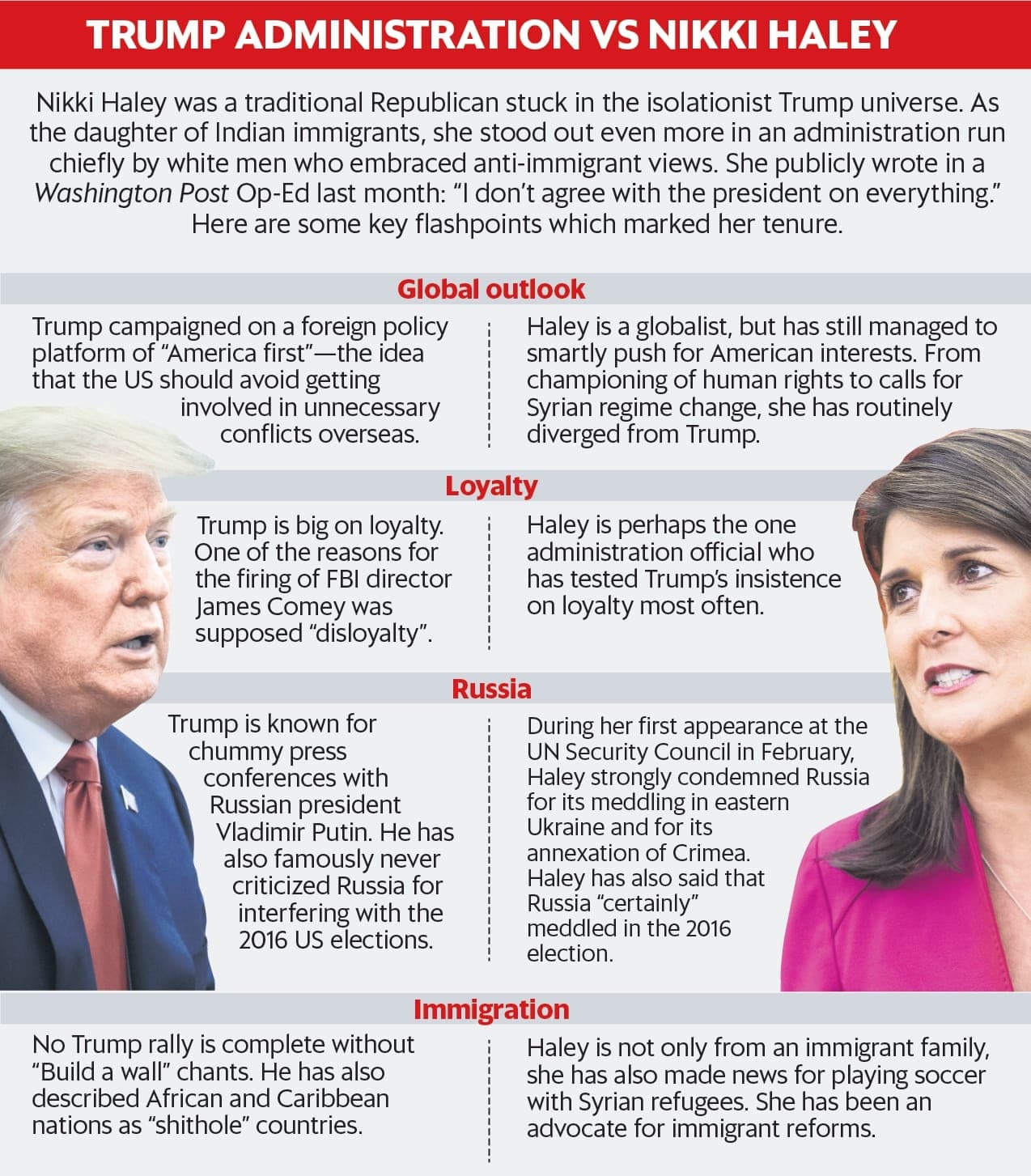 Syed Akbaruddin, India’s delightfully competent permanent representative to the U.N., told me that Haley was always attuned to India’s interests, even as she represented those of her own country. “To have a friend of India such as Nikki Haley represent the U.S. at the U.N. reflects the ties that bind the two countries in so many ways," he wrote in an email. “She was a formidable presence at the U.N," he added. “The sharp instincts of a successful public figure combined with soft, people-friendly skills pack quite a punch."

“Despite her political status," Akbaruddin continued, “she was quick to observe traditions of diplomatic protocol. When I asked to meet her soon after she joined, she insisted on coming across to meet me. She was always accessible and helpful, including during the long-drawn election of Judge Bhandari to the ICJ, in ways which I will always treasure but keep outside the public gaze." (Akbaruddin was referring to the fractious election to the International Court of Justice of Judge Dalveer Bhandari in November 2017, when India, unprecedentedly, took on the U.K.’s candidate and won a seat on the world court.)

Haley was the face of the Trump administration at the U.N., working for a president who has earned a justified reputation for riding roughshod over long-established alliances and norms of international civility. As such, she was adept at playing Trumpian hardball even with America’s closest friends. “She was at times a tougher partner than you would expect from a traditional close ally," said Jõao Vale de Almeida, the European Union’s ambassador to the U.N. “And she certainly forced all of us to be permanently focused. We agreed and disagree, but I think we all respected her frankness and her straightforward attitude even when we were disappointed by the positions she defended on behalf of her authorities."

Vale de Almeida did not elaborate on these positions, but any observer of international affairs would know that there was conflict between the U.S. and the EU over Washington’s decision to move its embassy in Israel to Jerusalem, the U.S. withdrawal from the U.N. Human Rights Council, and the Trump administration’s positions on climate change and trade. “Nikki Haley is a savvy politician who quickly learned her way out in diplomacy," added Vale de Almeida. “She managed to serve her government in a difficult context--the beginning of mandates of both a new U.S. President and a new U.N. Secretary General--when things were still in flux, and could have resulted in further distancing the U.S. from the U.N. I would say that her biggest achievement was to avoid a breakup and to contribute to keep the U.S. on board the U.N. ship, in spite of a considerable change of policy in Washington."

Haley showed notable poise in her time at the U.N., and undeniable personal charm. (Vale de Almeida asked me to mention that he would miss her and her family, as “good neighbours" in the building near the U.N. in which both he and Haley lived.) I recall attending an event in Manhattan early in her tenure as ambassador, organized by Women in the World (a colloquium run by Tina Brown, the celebrated editor). In an auditorium packed with women of a distinctly progressive persuasion—Hillary Voters to the last women—Haley was unfazed by the hostility and the frequent heckling. She had consented to appear at this opposition event, I was told, with no preconditions, no vetting of questions, no attempt to insulate herself from the ambient aggression.

Instead, she smiled and answered questions, even as the audience hissed her every word. Tina Brown had to reach for her microphone and plead for decorum. She needn’t have done so, for behind Haley’s Southern-belle exterior is a woman who is seemingly impervious to adversity. She’s the daughter of Indian immigrants who rose to the top of a Jim Crow state that was once fiercely confederate, in a party that hasn’t always had the finest modern relationship with America’s immigrants.

Haley is a mould-breaker, and showed that even in the manner of her departure from the Trump administration. Hers was the first resignation from the cabinet that was calm, collected and uncontentious. In the tempestuous world of Donald Trump, that is some achievement.