Imran Khan renews his call for dialogue, trade with India as he expresses support for Navjot Singh Sidhu, who has found himself at the centre of a controversy after attending his swearing-in over the weekend

New Delhi: Pakistan’s new Prime Minister (PM) Imran Khan on Tuesday renewed his call for dialogue and trade with India a day after it emerged that Indian PM Narendra Modi in a letter to Khan had said India was looking for “constructive and meaningful engagement" with its neighbour.

Analysts in India see Khan’s comments as more of what has been said by Pakistani leaders earlier rather than presenting an opportunity for an opening for peace talks with Pakistan. 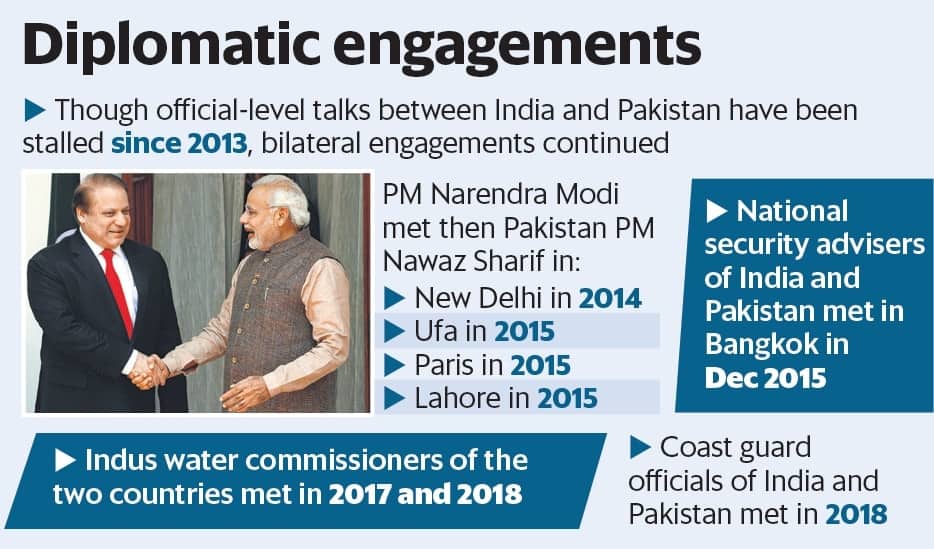 In his Twitter posts, Khan thanked Indian cricketer-turned-politician Navjot Singh Sidhu for attending his swearing in ceremony on Saturday.

“I want to thank Sidhu for coming to Pakistan for my oath taking. He was an ambassador of peace & was given amazing love & affection by ppl (people) of Pakistan," Khan, who heads Pakistan’s Tehreek-e-Insaf (PTI) said in his first post on Twitter.

“Those in India who targeted him are doing a gt (great) disservice to peace in the subcontinent—without peace our ppl cannot progress," Khan said in the same post. The reference was to a controversy that broke out after Sidhu hugged Pakistan army chief Qamar Javed Bajwa before the swearing-in ceremony.

“To move forward, Pakistan and India must dialogue and resolve their conflicts incl (including) Kashmir: The best way to alleviate poverty and uplift the people of the subcontinent is to resolve our differences through dialogue and start trading," the Pakistan prime minister said mirroring the comments he made on 26 July, a day after national polls in Pakistan put his PTI party ahead of its rivals in the National Assembly.

Khan’s comments came a day after India revealed that PM Modi had written to Khan saying India was looking for “constructive and meaningful engagement" with its neighbour.

Modi’s missive also recalled a telephonic conversation with Khan on 30 July, in which they spoke of their “shared vision to bring peace, security and prosperity in the Indian subcontinent, in order to make it free of terror and violence, and to focus on development".

“PM Imran Khan wants conflict resolution and trade with India; Wonder if there is a way to advance on both fronts. Until now its been rather hard to find," C. Raja Mohan, director, Institute of South Asian Studies, National University of Singapore, said in a Twitter post.

Dilip Sinha, a former Indian foreign ministry official who was in charge of the Pakistan desk between 2005 and 2007, was of the view that Khan’s talk of peace was “a case of more of the same" rather than an opportunity for a thaw in ties.

“Sidhu did not talk of terrorism emanating from Pakistan. He hugged Bajwa and he is seen as a man of peace," Sinha said.

“Khan also says that to move forward India and Pakistan should resolve the Kashmir dispute," he said.

“When Pakistan says this, they mean resolve the dispute according to what they want" which is to lay claim to the whole of Kashmir, he said.

“So I don’t think it as a new beginning," he said

written a letter to Khan coinciding with his swearing-in on Saturday in which he said India was looking for “constructive and meaningful engagement" with its neighbour. Modi’s missive also recalled a telephonic conversation with Khan on 30 July, “in which they spoke of their shared vision to bring peace, security and prosperity in the Indian subcontinent, in order to make it free of terror and violence, and to focus on development," a person familiar with the developments said.

Khan’s comments also came on a day when Sidhu, facing flak for his Pakistan visit, defended his trip and told reporters in Chandigarh that his visit was not a “political" one but in response to a “warm invitation from a friend." Sidhu also said he hugged Bajwa in an “emotional" moment, when the Pakistan army chief told him that they were making efforts to open the corridor from India’s Dera Baba Nanak to the Sikh shrine of Kartarpur Sahib, a PTI report said.

Since Saturday, Sidhu has been slammed by the opposition and has received brickbats from his own party, the Congress and Punjab Chief Minister Amarinder Singh for hugging Bajwa. “I think that was wrong for him to have shown the affection he did for the Pakistani Army chief," Amarinder Singh was quoted as telling reporters earlier.

On Tuesday, Sidhu said that he wanted “to make it clear that this meeting took place in Islamabad at a time when General Bajwa reached the venue of the swearing-in ceremony."

“He met me with enthusiasm after seeing me sitting in the first row. Immediately, he told me that they were making efforts to open the corridor from India’s Dera Baba Nanak to Kartarpur Sahib … to facilitate the pilgrims to pay obeisance on the occasion of 550th ‘Prakash Diwas’ of Guru Nanak Dev ji," Sidhu said.

“Without a thought, this thing said by Gen Bajwa was an emotional moment for me and the result (the hug) was for everyone to see. After that brief meeting in the gathering, I had no meeting with General Bajwa," Sidhu said adding that he was disappointed and hurt by the criticism over this sudden meeting.