New Delhi: Flood-ravaged Kerala has seen a spurt in communicable diseases, as the administration struggles to prevent and contain them with a debilitated healthcare system.

In August alone, the state government’s Integrated Disease Surveillance Project recorded 171 cases of leptospirosis with four deaths, against 46 cases with six deaths last August. Leptospirosis is a bacterial disease transmitted mainly through water or soil contaminated by the urine of infected animals. 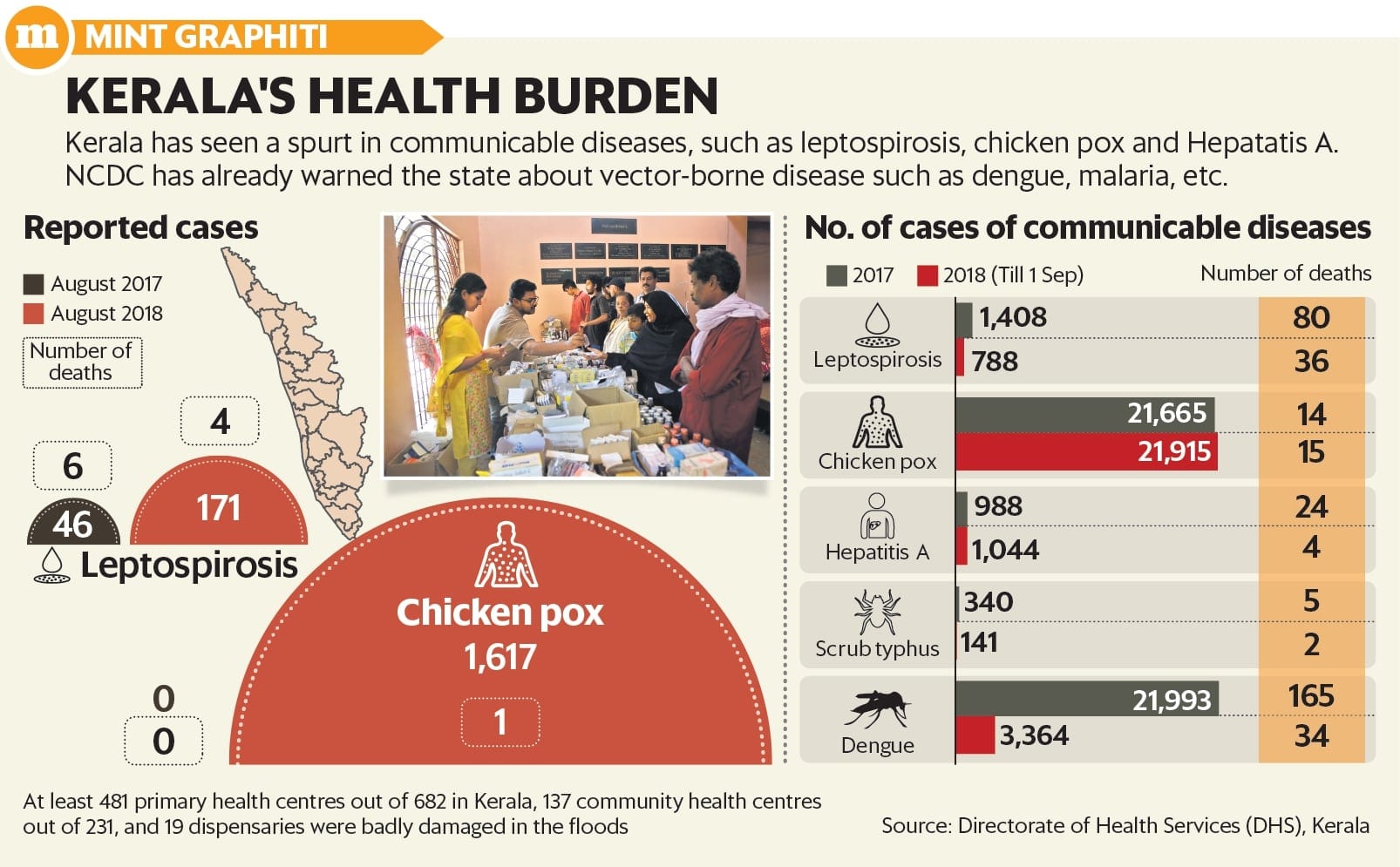 Kerala has 18 general hospitals, 16 district hospitals, 231 community health centres (CHCs) and 682 primary health centres (PHCs). According to the state’s health and family welfare department, at least 481 PHCs, 137 CHCs and 19 dispensaries were badly damaged in the floods, after which the state sought help from the Union health ministry. The healthcare system needs to gear up quickly as lakhs of people in relief camps return homes and seek medical services.

“The government, along with the support of the people, is preparing projects to rebuild all this. Many people, organizations and institutions have promised help and if all this materializes in a proper way, the problem can be solved easily. We have decided to open 200 temporary hospitals to tackle health issues," she said.

The state government is taking help from the private sector and also sought help from other states. Teams of expert doctors have arrived from several states including Tamil Nadu, Karnataka, Maharashtra and Andhra Pradesh with essential drugs. The central government, too, has sent an expert team and provided materials for environmental sanitation.

“Functioning of various government and private hospitals was badly affected by the heavy rains and flooding. Many of them have started functioning and within two weeks, all of them will be working in full swing," said Shailaja.

“Availability of medicines, adequate service of doctors and nurses, chlorination of wells and other water sources, shifting of people with communicable diseases to separate wards, ensuring medicine availability for people suffering from non-communicable diseases, setting up of temporary hospitals in place of hospitals destroyed by the flood etc are being taken care of," she said.

The National Centre for Diseases Control (NCDC) has already warned about vector-borne diseases. “The recent floods may indirectly lead to an increase in vector-borne diseases through the expansion in the number and range of vector breeding habitats. Standing water caused by heavy rainfall or overflow of rivers can act as breeding sites for mosquitoes, and therefore enhance the potential for the breeding of vectors of dengue, chikungunya, malaria, Japanese encephalitis, West Nile Fever, kala azar, scrub typhus etc. Flooding may initially flush out mosquito breeding, but it comes back when the waters recede," a senior NCDC official told Mint. The state has already recorded 3,364 cases of dengue with 34 deaths.