Greece on “knife edge” in last hours to agree bailout

Athens: Greece’s Prime Minister Lucas Papademos scrambled on Sunday to convince lenders and politicians to sign off on a €130 billion rescue, after his finance minister said just hours remain before the euro zone abandons the country to its fate.

A technocrat appointed in November, Papademos is trying to ensure cash-strapped Greece avoids sinking into a chaotic default when big bond redemptions come due next month. 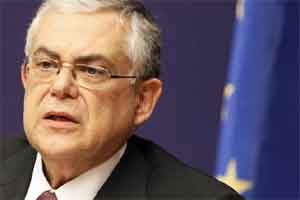 “We are on a knife edge," finance minister Evangelos Venizelos said on Saturday after what he called a “very difficult" conference call with euro zone counterparts.

“The moment is very crucial."

Papademos’s first mission on Sunday is to agree at least a preliminary deal with the “troika" of foreign lenders on reforms included in the bailout, after several days of talks failed to resolve the thorny issue of cutting wages and spending.

Papademos then faces an even tougher task convincing party chiefs in his own national unity coalition to back the reforms demanded by the lenders at the risk of ruining their chances at national elections expected in April.

He is expected to meet the lenders in the early afternoon before huddling with the socialist, conservative and far-right party leaders in his coalition later in the day.

The conservative New Democracy and the far-right LAOS party in particular have staunchly opposed further wage and spending cuts, arguing that risks pushing Greece into an even deeper recession and imposing more pain on struggling Greeks.

“The truth is that people are tired. They can’t put up with more austerity," New Democracy spokesman Yannis Michelakis told the Real News weekly.

LAOS leader George Karatzaferis, meanwhile, rejected what he called the “ultimatum" to strike a deal on Sunday.

Papademos’s government implored them to be more cooperative.

“We have carried out superhuman negotiations. And so political leaders must help us now," a senior government official said, adding that the party chiefs were free to join the Sunday talks with lenders if they wanted.

Greece’s lenders, who want spending cuts worth about 1% of GDP - or just above €2 billion - this year, have demanded all political leaders endorse the cuts irrespective of the outcome at the polls.

Athens has wrangled without success for weeks on the bailout package and a debt restructuring plan, putting itself dangerously close to bankruptcy as €14.5 billion of debt falls due in mid-March.

The lack of agreement has kept financial markets on tenterhooks as investors fret a messy default could cause shockwaves across the financial system, triggering a credit crunch and sending the global economy back into recession.

Athens says it has notched up some progress by agreeing a plan to recapitalise Greek banks and details on privatisation, even if bigger issues on reform remain unresolved. A senior banker told Reuters the recapitalisation would occur mainly via common shares with restricted voting rights.

The talks have moved slowly also because the troika wants agreement on all parts of the complex Greek rescue deal - including any contribution by public creditors like the ECB - before approving the bailout, a source close to the talks said.

The rescue package, drawn up in October, also includes a bond swap under which banks and insurers will take real losses of about 70% on the Greek debt they hold in a bid to ease Greece’s debt burden by €100 billion.

But Greece’s deteriorating economic prospects and struggles with reform have fed concern that will not be enough to get its debt back to a mangeable level and Athens wants public creditors like the ECB to also take part in the bond swap.

Representatives for the banks and insurers were expected to continue talks in Athens over the weekend on the bond swap, which Venizelos has said is now the easier part of the overall process to save Greece.

The debt swap and bailout was designed to bring Greece’s debt down to 120% of GDP by 2020, but EU sources say euro zone governments may now have to cough up an extra €15 billion on top of the €130 billion agreed for that to happen.