To ensure speedy and accurate distribution of land rights, Odisha deploys drones to map 250,000 slum households in project billed as the world's largest

Bhubaneswar/Bengaluru: K. Venkatesh remembers vividly the November afternoon when he first saw the flying object swooping over his locality in the Nolia Sahi slum in coastal Odisha. A black, bird-like creature was flying across and making a buzzing sound, he says. Others living in the slum, near the Konark beach, were perplexed too

Venkatesh at that time was unaware that the drones flying over their settlement would be the answer to their decades-old problem of a permanent home. They are among some 1 million slum dwellers in Odisha who, like elsewhere in India, live under the constant threat of eviction in the absence of land rights.

The drones were a key instrument in what is being billed as the world’s largest slum-titling project. Nolia Sahi was among the first few slums across the districts of Ganjam and Puri to carry out a drone-based survey before the slum dwellers could be handed land rights under the government’s Odisha Land Rights to Slum Dwellers Act, 2017. 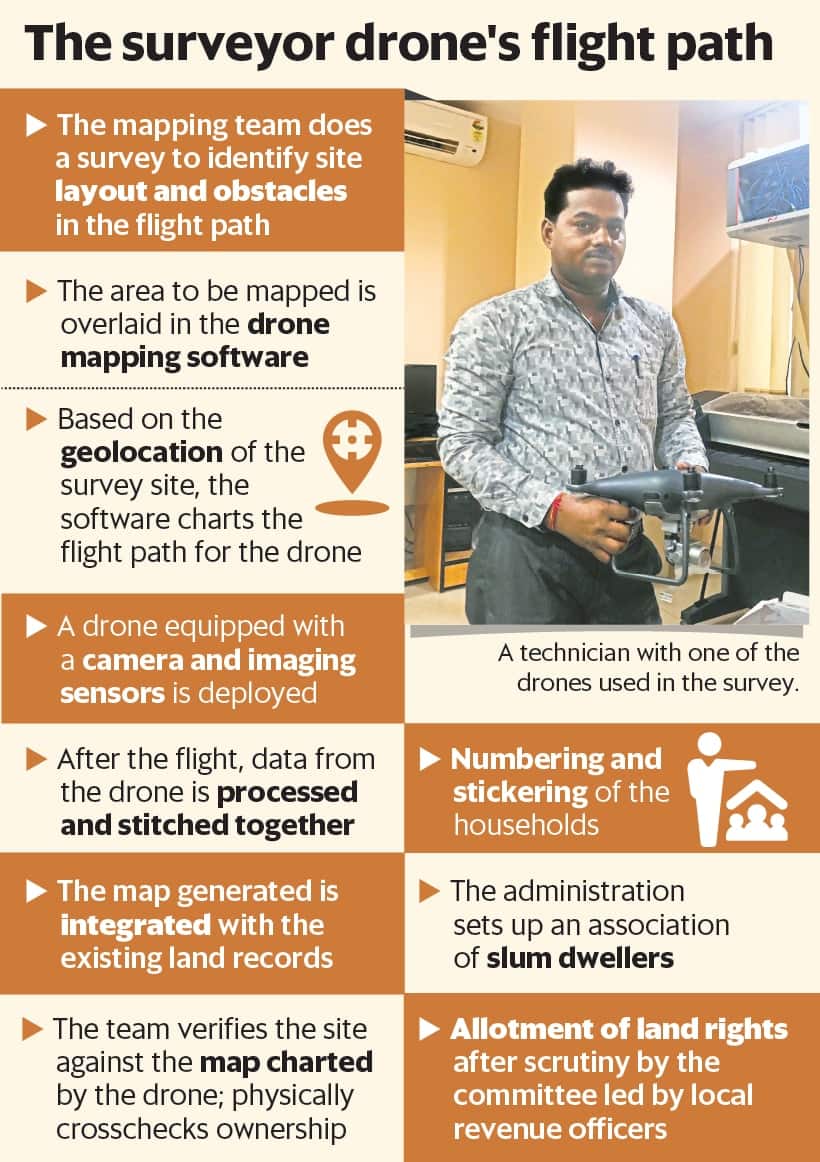 Laws are made by politicians and wonks in the cities and implemented in faraway lands, it is said. Likewise, the biggest challenge in the Odisha slum titling project was to verify the exact slum households in a given area and make land rights accordingly.

Manual surveys and mapping would have taken nearly a decade and the government wanted to hand over land titles by 2018.

The government turned to drones for ensuring both speed and accuracy. Tata Trusts, along with officials from the state government and Omidyar Network, brought a fleet of over a dozen drones to map around 250,000 slum households across the state, create maps, and blend that data with on-the-ground surveys about families residing in the slums.

More on the two partners of the government later.

Venkatesh’s family was among the 2,000 households who received their “patta" or land rights certificate from the government earlier this month. By December 2018, the government plans to allot land ownership certificates to nearly 200,000 such households.

The 35-year-old fisherman says he understands now what the drone was doing up in the sky in November. “We actually didn’t understand what freedom means even after India’s independence in 1947. This (land title) means the real freedom for us," Venkatesh says in Telugu.

Nayak C., who lives in Mausima Sahi slum in Konark, wants to thank “the lifeless" drone for kicking off what he calls a revolution. “It’s god sent for us. Nobody doubts the images captured by the drones," he says in Hindi. Nayak, 44, an handicraft shop owner, is also the president of his local slum association and helps coordinate with the government officials and the local community.

The Odisha slum-titling effort is a smart governance project with lessons for the rest of the country. Some 65 million people live in slums in India, according to the 2011 national census, and the number was estimated to have risen to over 100 million by 2017. That’s more than the population of Egypt.

Most slums in India are run under the patronage of local politicians and strongmen, for whom the overcrowded urban housing is an easy source of rentier profits. Over long periods, governments are forced to recognize the slum areas as legitimate settlements. But they are faced with considerable revenue leakages while collecting costs of delivery of public services such as water and electricity because data of the end user is not easily available. The process is messy dragging on and on.

G. Mathi Vathanan, secretary of Odisha’s housing and urban development department, didn’t have the luxury of time. A manual mapping of the targeted 250,000 slum households across the state would have easily taken up to a decade, nothing less. Moreover, relying purely on manual surveys could have attracted allegations of favouritism and other wrongdoing.

“We took the ordinance route and not normal legislation route to ensure speed and minimize any misuse," says Vathanan. “Then, the question was how do you prove that you have been living up to that cut off date (10 August 2017). Anybody can give an affidavit. We asked them to bring any government issued proof; it could be an Aadhaar card, letter from a government school, or anything else issued by the government."

“We then said that we have to fix the boundaries of slums digitally," says Vathanan, a 1994 Odisha cadre IAS officer who holds an M. Tech degree from the Indian Institute of Technology-Madras.

Drones not only assured speed and building blocks for the core data in digital format, but also the much needed transparency in executing a programme of this scale and complexity. “Drone survey is the first activity. First, we capture the boundary, and then prepare the maps, and then you activate the slum survey," explains Vathanan. Manual surveys are subject to manipulations at the ground level, he adds.

The other challenge was to ensure that there aren’t too many different government departments involved in the execution.

“Manual (survey) is very time consuming. I do not have the machinery, I have to borrow the revenue (department’s) machinery. I have to depend on another department’s machinery. That department is meant for protecting the land, not for giving it away. By nature, they are an enforcement agency," adds the housing secretary.

Drones were just the starting point, however. The data collected needed to be vetted on the ground. “It’s followed by the ground survey, door-to-door checks across slum households. It involves verifications from the community. We measure how much of space they actually occupy. We measure it with physical tapes," says Vathanan, adding having the drone pictures helps.

Once that is done, a list of occupants is drawn up so that everyone can verify it. “This takes out the slum landlords. At the slum level, a proposal is finalized and given to the municipality. A scrutiny committee goes through the proposal case by case, they even re-verify everything, and make the final list, inviting any potential objections," says Vathanan.

The digital data is then transferred to the GIS-based state map reflecting every detail. (GIS is short for geographical information system, which is used to store and manage geographical data.)

Vathanan and the Odisha government partnered with Tata Trusts and Omidyar Network, an impact investing firm, for implementation of the programme—right from drone mapping to allotment of the land rights.

Shishir Ranjan Dash, who is leading the slum-titling work for Tata Trusts, says everyone kept chanting drones wherever he went. “They were all fascinated and used to ask me if I was carrying a drone myself," he recalls.

Of the 109 municipal areas to be covered, the programme was first introduced in Ganjam and Puri because of good support from district authorities there, says Dash. “The first task was to mark the slum boundaries. We didn’t know if a particular household was part of a slum or not. We used the Differential Global Positioning Systems surveys," he says.

A WhatsApp group helped with the coordination. “We had everyone from the district collectors to local officials on the group apart from the housing secretary. That helped because every time we flagged a bottleneck, it was immediately addressed," Dash adds.

Pictures captured during each drone flight are processed as orthophotos, which are aerial photographs that have been geometrically corrected so that they have a uniform scale and can be used like regular maps. So far, about a dozen Phantom drones from the Chinese quadcopter-maker DJI have been deployed. These drones cover about a kilometre during each flight lasting five to seven minutes.

Later, all the images are indexed with clearly demarcated boundaries. This helps in the on-the-ground part of the survey. Dash and his team of volunteers then visit each household and verify the number of family members and get other details.

The key is to combine drone data with on the ground reporting and verification. “After we record the details of each household in an Excel sheet, we ask the community members to identify those who are genuine slum dwellers," says Dash.

“In the first phase, we surveyed around 3,200 slum households, out of which nearly 2,200 were given “patta" or land rights. Now, we are looking into why the remaining 1,000 or so have not been given the land rights," says Dash.

“We want to create liveable habitats and not just slums. What are the requirements of the people residing in slums beyond basic services? For instance, if there’s a pond nearby where slum dwellers are taking bath, we include that within the boundaries," says Dash. Other targets include each household having access to an ambulance and a toilet, he adds.

Omidyar leveraged its expertise in spatial technology and its work with the Asia Foundation on a drone-based land survey project in the Philippines.

“We supported The Asia Foundation to demonstrate the potential of drones as a new alternative technology for surveying," says Shreya Deb, principal, investments at Omidyar Network.

The Philippines pilot was successful leading to drones-based surveying becoming a government approved method of such surveys in that country. Omidyar Network believes drones technology is “a powerful epicentre for community involvement in mapping households".

The Odisha Space Applications Centre (ORSAC), a state agency, was roped in to set benchmarks for accuracy in the mapping surveys. The project team set up a test bed which underwent a detailed survey by ORSAC and the results derived were used as a benchmark to evaluate mapping vendors. Two were selected.

“The detailed survey by ORSAC set a very high accuracy test bed against which the mapping agencies were benchmarked. In future, the test bed can be used as a benchmark to test other vendors for their accuracy, speed and turnaround time," Deb said in an interview.

Drone-based surveys are becoming the new method of choice when it comes to surveying or mapping areas especially with the speed and accuracy that the technology offers. Earlier this year, the Slum Rehabilitation Authority of Mumbai conducted a drone-based survey pilot at Hariyali village in Kurla as part of a bigger plan to map slums across Mumbai.

According to Ananth Padmanabhan, a fellow at think tank Carnegie India, there is a lot of digitization in land titling in India today but the data on the title can be wrong to begin with. This becomes all the more troublesome with new technologies like blockchain where data is immutable and inaccurate data can have a significant impact on the entire implementation. States such as Andhra Pradesh, Maharashtra, and Telangana are trialling land titles on blockchains, as is NITI Aayog, India’s policy think tank.

“Surveys and mapping done using drones provide better granular data, especially when it comes to highly populated settlements like slums where boundaries are difficult to be identified. Also, drones allow you to cover a larger area in the same amount of time with good accuracy," says Padmanabhan.

Imagery captured over time of the same area can be used to monitor development or progress in areas over a period of time.