Asian nations swimming in debt are at risk

The debt binge is spread across companies, banks and is inflating bubbles in everything from the price of steel rebar in Shanghai to property prices in Sydney

Twenty years after the Asian financial crisis and a decade since the global credit crunch, the region is swimming in debt.

The debt binge is spread across companies, banks, governments and households and is inflating bubbles in everything from the price of steel rebar in Shanghai to property prices in Sydney. As the US Federal Reserve raises borrowing costs, that means debt is again a concern. Exposure to China’s slowdown, fluctuating commodity prices and currency volatility are just some of the risks. S&P Global Ratings estimates that of the almost $1 trillion in Asia corporate debt they rate that is due to mature by 2021, 63% of it is denominated in dollars and 7% in euros. To be sure, there are sizable buffers too. Governments have strengthened their international reserves, hedging of risks has improved and deeper local bond markets offer alternative sources of finance. And while the Fed is tightening, ongoing massive monetary easing in Europe and Japan provides an offset. Interest rates remain low by historical standards and reflation is helping bring down servicing costs.

Still, the pace of borrowing is eye watering. A debt hangover in Asia matters because the region is the biggest contributor to global growth. Asia’s expansion will probably exceed 5% in 2017 and 2018, compared with about 3.5% for the world, according to the International Monetary Fund.

Here’s a look at the metrics in two of Asia’s biggest economies, India and China

China’s total debt likely reached around 258 % of the economy’s size last year, up from 158 % in 2005. President Xi Jinping and his government have made curbing excessive credit and leverage a key priority this year though progress appears to be slow. Much of the borrowing is at the corporate level, a sector that continues to be dominated by debt-laden state-owned enterprises, so-called zombie firms, with the IMF warning that China needs to urgently deal with company debt.

Then there’s local government borrowing and the murky world of shadow financing and off-balance sheet lending. There are already plenty of warning signals, with rising defaults of corporate bonds and the first-ever rating downgrade of a Chinese local-government financing vehicle.

Although smaller than in some other Asian nations, there are various interconnected debt problems in India. The government debt-to-GDP ratio is nearly 70%, much higher than similar BBB rated sovereigns, Fitch Ratings Ltd said in a report this month. And corporate debt is increasing, along with a rise in bad loans, which is causing risks for the banking sector. 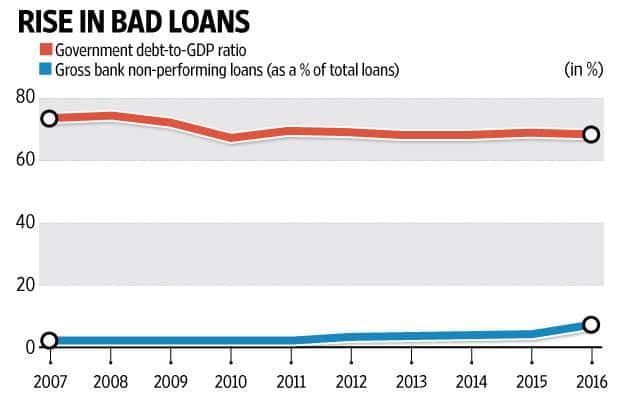 And with a narrow tax base, the government will have to fund those measures with more borrowing, raising the debt burden of the state.