Thiruvananthapuram, Naya Raipur, Rajkot, Amravati, Patna and Srinagar are some of the 30 cities that have been selected under the third round of Smart Cities Mission

New Delhi: Thiruvananthapuram, Naya Raipur, Rajkot, Amravati, Patna and Srinagar are few of the 30 cities that have been selected under the third round of the Smart Cities Mission, taking the total number of selected cities to 90.

Other cities which are now a part of the mission include Gandhinagar, Muzaffarpur, Karnal, Tirunelveli and Gangtok.

The government also launched a city livability index to be based on 79 indicators to monitor the development of cities and address gap areas.

The 30 cities under the Smart Cities Mission were selected from 45 cities which took part in the third round and have a proposed total investment of Rs57,393 crore. This includes Rs46,879 crore for core infrastructure development and Rs10,514 crore for technology-based development.

The Union government had launched the Smart Cities Mission with the aim of developing 100 cities across the country. The cities are selected through a city challenge competition.

Twenty cities, including Itanagar, Meerut, Imphal and Haldia, will compete for the remaining 10 slots under the mission. 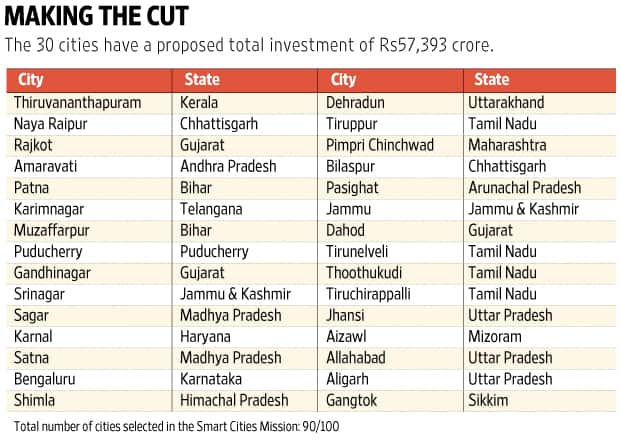 “The work that has been done in the last two years needs to be acknowledged. Significant progress that has taken place. In last three months under the leadership of the minister we have visited 22 states to take stock of the missions.We are doing things differently this time," Rajiv Gauba, secretary, ministry of urban development said.