Govt agrees to drop key amendments, including those doing away with consent clause, social impact assessment

New Delhi: In a major climbdown, the National Democratic Alliance (NDA) on Monday agreed to drop key amendments, including those doing away with the so-called consent clause and social impact assessment in the controversial 2015 land acquisition bill.

The unexpected move by the Bharatiya Janata Party (BJP)-led NDA to meet the opposition more than halfway sets the stage for striking consensus on passage of the legislation, designed to address impediments to expanding manufacturing capacity in the country.

Politically, however, this is a big setback to the BJP, particularly Prime Minister Narendra Modi, since the government had, despite opposition from within and outside the party, stuck to its stand to dilute the land acquisition provisions in the existing land law.

This disrupted most of the budget session of Parliament and eventually forced the government to refer the bill to a parliamentary committee.

Participating in the meeting on Monday of the joint committee of Parliament set up to study the controversial bill, members of the NDA moved a resolution to withdraw six controversial amendments that had been opposed vehemently by a united opposition led by the Congress. As a result, the committee is now expected to submit a consensus report by 7 August to Parliament.

“The government had proposed nine amendments and they have rolled back six," said a person familiar with the development.

One of the amendments that has been dropped has to do with the scrapping of the consent clause that was a key element of the 2013 land law shepherded by the previous Congress-led United Progressive Alliance government through Parliament in 2013.

That law, passed by Parliament in 2013, replaced an 1894 land acquisition act that was seen as anti- farmer and anti-industry at the same time.

The consent clause in the 2013 law mandated that those acquiring land get the assent of 70% farmers for public-private partnerships and 80% for private projects.. This was removed by the NDA to accommodate concerns of industry that the process of acquisition would be drawn out. It will now be reinstated.

Another key clause that has been reinstated is on social impact assessment. Industry believed this delays the process of acquisition. The NDA removed this in its version of the bill.

Another amendment sought to dilute stringent provisions that sought to punish officials for any malpractices during acquisition of land. 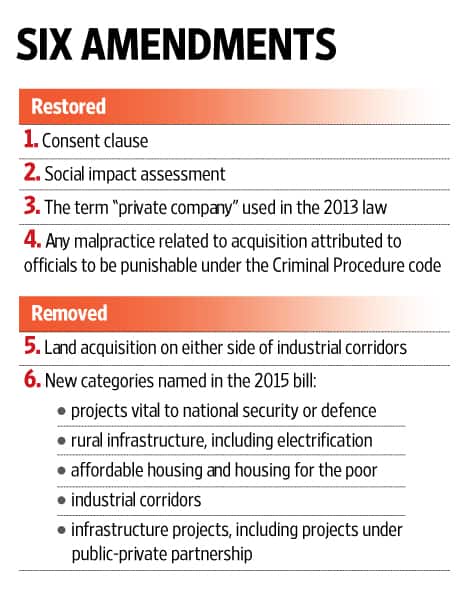 Public pressure and a united opposition forced the NDA’s hand, a second person familiar with the matter said, asking not to be identified.

“It seems the government didn’t realize in the beginning that it will have to face so much opposition," said Sanjay Kumar, professor and director of the Centre for the Study of Developing Societies.

The NDA itself was divided on the changes.

BJP allies Shiv Sena and Republican Party of India (Athawale) had told the government that they would vote against the bill. There was pressure from another ally, the Shiromani Akali Dal, which wanted the government to address the perception that the bill undermined the interests of farmers.

Members of the BJP were also under pressure from the Swadeshi Jagran Manch, Bharatiya Kisan Sangh, Bharatiya Mazdoor Sangh, all affiliates of their party’s ideological parent, the Rashtriya Swayamsevak Sangh. These organizations had repeatedly asked the government to drop the controversial amendments.

Former rural development secretary N.C. Saxena is of the view that the 2013 law was not a “good law" because it delayed the process of land acquisition. But “the government cannot bypass the will of more than 70% of the people", he said.

Videocon Industries Ltd chairman Venugopal Dhoot said both industry and the government want the interests of farmers to be protected. But Dhoot said that while he supports restoration of the consent clause, he does not think the social impact assessment should have been restored.