Nepal’s Maoists on Tuesday threatened to paralyse the country with an indefinite general strike as its supremo Prachanda blamed India’s “naked interference" for the lingering political crisis in that country.

Serving an ultimatum to the embattled 22-party coalition led by Madhav Kumar Nepal to resolve the political deadlock by 24 January, Prachanda demanded the formation of a national government, which will include the Maoists.

After paralysing the country for the last three days with its anti-government shutdown, the Maoists threatened to launch an indefinite general strike next month. Prachanda lashed out against India for its “naked interference" in Nepal’s internal affairs, saying he will only talk to New Delhi and not to the “puppet" government in Nepal. 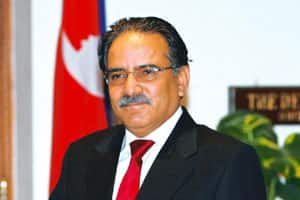 Protest Mode: Nepal’s Maoist leader Prachanda says he will only talk to New Delhi and not to the ‘puppet’ government in Nepal. B Mathur / Reuters

The Maoist chief, addressing a massive rally, demanded the disbandment of the present coalition government and replacement with a national government, which would include the Maoists.

The anti-government protests is aimed to step up pressure on the government to rectify the “unconstitutional" decision of President Ram Baran Yadav, who reinstated then army chief general Rukmangad Katawal, dismissed by Prachanda in May.

“Who gave him (Gen Kapoor) the right to speak against the Comprehensive Peace Agreement?" Prachanda asked amid loud cheers from his supporters.