Five charts that can help understand the H1B visa debate

Last week, a bill was introduced in the US House of Representatives which seeks to more than double the minimum wage for H-1B visa holders and also reserve 20% of the visas for small and start-up employers.

Given the fact that India’s IT companies are a major beneficiary of these visas, the move would have a big impact on their costs and earnings. It is not surprising that India’s major IT companies are headed to Washington later this month to plead their case before the US administration. Are the Indian IT firms being targeted in an unfair way by the proponents of these reforms?

To be sure, H1B visa has always been an issue that is hotly debated in the US. Its opponents have argued that it has been misused to displace US workers by bringing in cheap skilled labour from abroad, while those using it have justified it by citing its utility in promoting innovation by getting skilled workforce. We have analyzed all H1B visa application filings from 2010 to 2016 to ascertain the merit of these arguments.

In theory, US companies use H1B visa to hire skilled foreign professionals to fill jobs when qualified Americans aren’t available. The number of visas issues is limited to 65,000 per year with an additional 20,000 made available for foreigners with advanced degrees from US universities.

In every year since 2004, the number of applications far exceeds the quota and the USCIS grants visas through a computer-generated lottery. The random drawing should make the process of awarding the visas unbiased. But there is a catch. While each employee is limited to only one application, there isn’t a limit on the number of applications that an employer can submit. For instance, if a company submits 10 labour condition applications for one position, it has improved its odds of winning the H1B lottery. This means that bigger firms can improve their odds by nominating multiple candidates for one job in the US.

The numbers bear this out. Since 2010, just six outsourcing firms have accounted for 20-30% of all H1B visa applications. 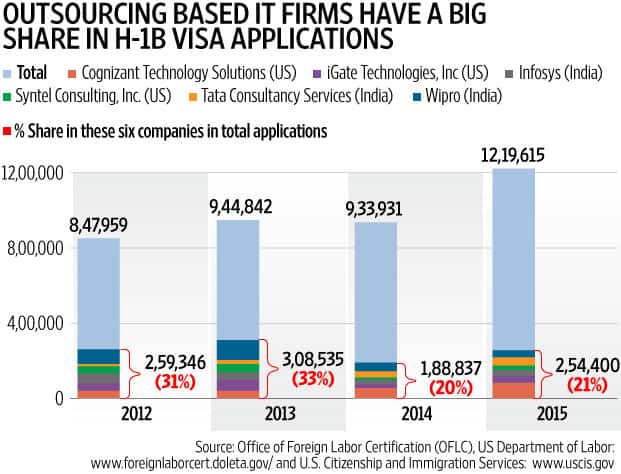 Given the fact that over 8,000 companies typically submit at least one application, this disparity is even more glaring. While company-level data on H1B visas isn’t easily accessible, the rising share of H1B visas awarded to Indians indicates that outsourcing firms have found ways to game the system. The dominance of workers with Bachelor’s degrees among H1B visa workers also suggests that they are being brought in to substitute domestic labour rather than do cutting-edge innovation. Under US federal law, employers who hire H1B workers are required to declare that hiring overseas workers won’t displace American workers. But this requirement is waived off if the annual salary is greater than $60,000. Interestingly, the median salary for H1B employees of most outsourcing firms hovers at the $60,000 mark. 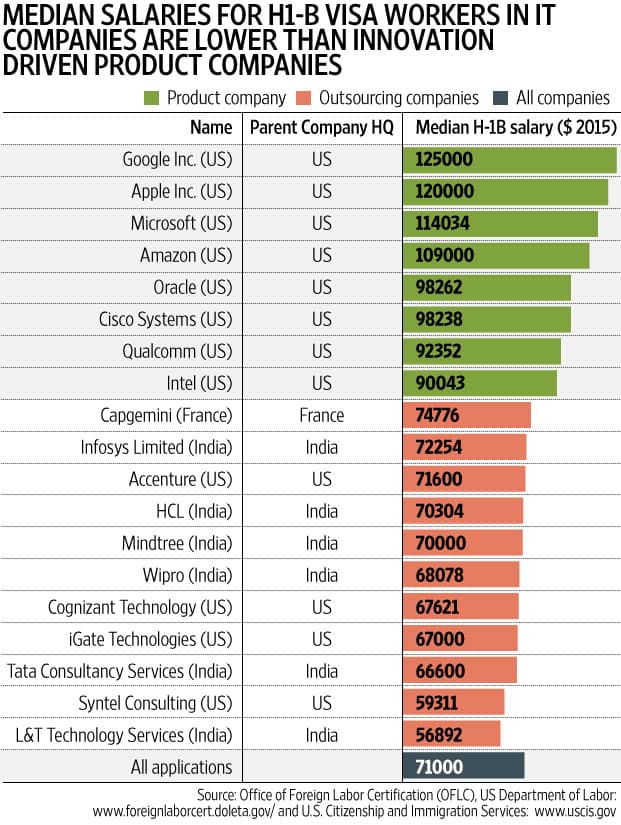 While the median salary for all H-1B workers in 2015 was $71,000, most of the large outsourcing firms, with the exception of Accenture, came in below the mark. This pattern holds regardless of the origin of the services company. For product-based technology companies, the median salary of their foreign workers is closer to $100,000, which indicates more qualified or in-demand hires.

Outsourcing firms also score poorly on the innovation spectrum, as measured by patent filings. Data from the US Patent and Trademark Office shows that in 2015, not a single technology services company was among the top 200 in terms of patents granted. Accenture, the highest ranked within this group, makes an entry at 294. In some ways this is understandable—IT services companies typically work on customer projects and don’t build their own intellectual property (IP). But the lack of any tangible innovation indicators makes it hard to argue that outsourcing companies are hiring foreign workers that posses a skill set not found locally. The low wages paid to these “skilled workers" further dents this argument.

The statistics presented above underline the fact that India’s IT companies bear part of the blame for the backlash against H1B visas. The limit of $60,000 as minimum salary for waiver from declarations that it would displace domestic labour was set in 1989, and would be at least $120000 if inflation were to be accounted for. Demand for allocating 20% of the visas for smaller firms and start-ups seems to be a fair one, since they cannot compete with the flood of applications submitted by larger companies.

But in the rush to plug the loopholes, there is a danger that the pendulum could swing to the other extreme by setting a very high cost for foreign skilled workers to work in the US.

As is the case with knee-jerk trade-protectionism, this could do more harm than good to the US economy, especially its technology industry.

Shailesh Chitnis is head of product at Compile Inc., a data intelligence company based in Bangalore and Menlo Park