New Delhi: The Congress, the dominant constituent of the ruling United Progressive Alliance (UPA) government, is putting in place a plan that it believes will give the administration a much-required makeover and revive sagging morale in the party ahead of state elections this year and next, and in the 2014 general elections.

Son of party president Sonia Gandhi, and widely seen as a prime-minister-in-waiting, Gandhi, 41, will not join the government, but instead, “focus on revamping and re-energizing the party" ahead of the next general elections, said a Congress general secretary who did not want to be identified.

Gandhi is currently general secretary of the party. 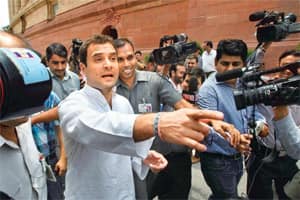 “Pranab Mukherjee’s exit from the government to contest in the presidential election itself would lead to major changes in the government," said a Congress minister on condition of anonymity.

Another general secretary of the Congress, who did not want to be identified, added that Gandhi has taken a keen interest in the coming cabinet shuffle. Sonia Gandhi has already met several senior leaders and ministers to discuss possible changes in the government and the organization. Although there is no talk of replacing Prime Minister Manmohan Singh, who has come under fire from several quarters—including his own partymen during a recent Congress Working Committee meeting—for the government’s failure to manage the economy and the country, Delhi’s power circles have been abuzz with talk of a radical rehaul of portfolios with several new ministers being inducted.

Several Congress leaders believe the image makover the government will receive from the shuffling of portfolios and the induction of fresh faces, and Gandhi’s greater involvement in the party’s workings, will help turn the tide.

Since 2009, when it returned to power with a surprisingly good performance, UPA has been mired in several corruption-related controversies, and allowed the country and the economy to drift.

Gandhi has a mixed political record. While he suffered his worst reverse in the just-concluded elections to the state assembly of Uttar Pradesh, he is also credited with spearheading the return of the Congress to power in 2009. The party leader cited in the first instance said he is now involved in several aspects of the party’s functioning and no longer confines himself to the activities of youth and student wings of the party.

For instance, Gandhi is midway through meetings with the party’s members of Parliament and senior legislators across the country for inputs to overhaul strategy. He has also been trying to get the youth and student wings of the party work to more closely and better with the rest of the party.

The party needs to get its act together, according to the general secretary cited in the first instance.

“It has to focus on states like Uttar Pradesh, Andhra Pradesh, Madhya Pradesh, Punjab and Karnataka, where party units are still in disarray," this person said. “Only a fresh team in the party can make some impact as the older set of leaders have become non-effective."

The real revival of the party’s fortunes, said an analyst, would be dependent on the government’s ability to manage critical issues related to the economy.

“It is true that the Congress has to bring in changes because its popularity will be at stake in the state elections coming up, especially in those states (in which) it has to fight the BJP directly. But the changes will have the desired impact only if it can correlate this with an overall improvement in the economic situation, investment atmosphere and inflation," said Balveer Arora, former head of the department of political science, Jawaharlal Nehru University.

Gujarat and Himachal Pradesh go to the polls later this year and Karnataka, Madhya Pradesh and Rajasthan next year.