Can BJP retain its foothold in Chhattisgarh?

The BJP has dominated Chhattisgarh politics for the last 15 years, but now it faces threats from ST discontent, farmer distress and anti-incumbency

New Delhi: Raman Singh, the longest-serving Bharatiya Janata Party (BJP) chief minister, who has led Chhattisgarh for 15 years, hopes to extend his run. In a state blighted by poverty and conflict, he has led the BJP to three election victories, adding the state to the party’s Hindi belt stronghold. However, recent events suggest that the BJP’s hold on power in Chhattisgarh could be loosening. The upcoming elections will be a test of BJP’s popularity, especially among the poor and marginalized. 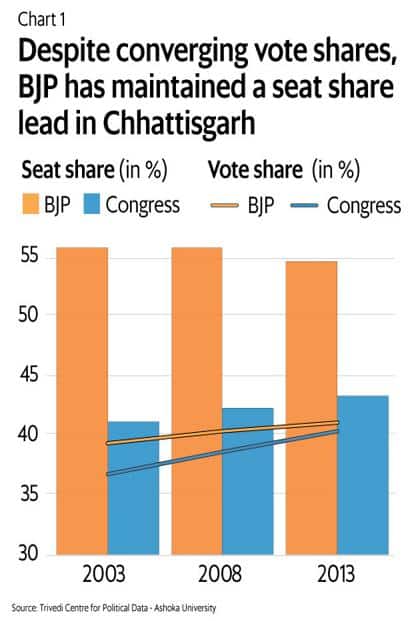 Yet, the small vote share difference led to a significant difference in seats. The BJP won 49 seats out of 90—a comfortable majority and 10 more than the Congress. Like elsewhere in the country, the BJP has been more efficient in converting votes into seats. In 2013, the BJP needed 109,495 votes for every seat it won, around 20% less than the Congress ratio. The BJP’s overall seat share has remained largely constant hovering around 55% across elections, but its seat composition has changed. In 2008, the BJP won more seats reserved for the Scheduled Tribes (ST) in the state’s south and north. In 2013, the party lost power in some of these areas but made gains in central part of the state. 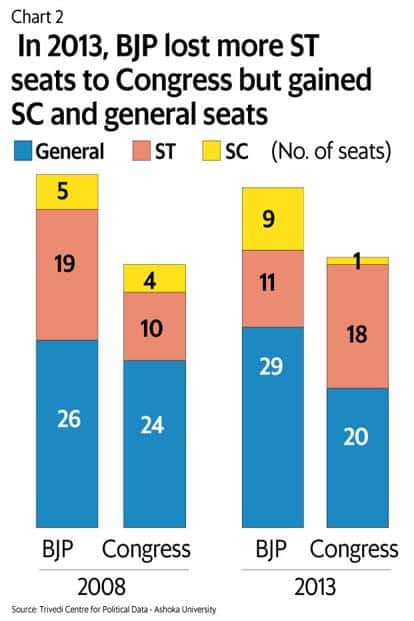 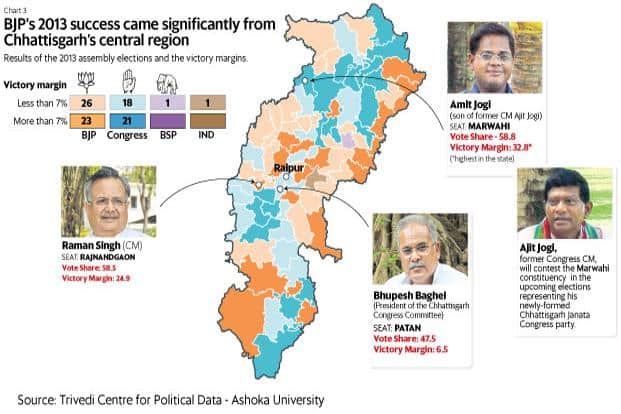 As we highlighted last week, the BJP has enjoyed relative success in tribal strongholds partly because of the grassroots works of the Sangh Parivar, In 2008, this was true in Chhattisgarh, where 31% of the population are STs and where the BJP won 19 of the 29 seats reserved for ST candidates.

But in 2013, the party’s fortunes had reversed. They won only 11 ST seats, losing 8 to the Congress. Of the 7 constituencies with more than 70% ST population, the BJP won just one, compared to five out of seven in 2008.

As per the post-poll survey data from Lokniti-CSDS, the bulk of the state’s ST population voted for the Congress and other parties like the Gondwana Gantantra Party. Less than 20% of BJP’s votes in 2013 came from ST voters while more than half came from other backward classes (OBC) voters. 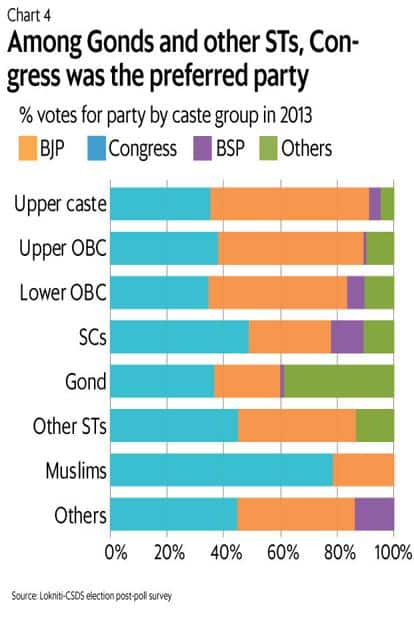 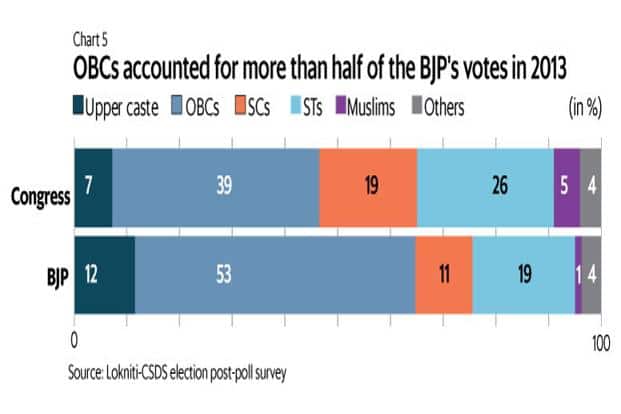 One source of ST discontent with the BJP is the slow implementation of the Forest Rights Act. In 2006, the centre introduced a law recognizing and vesting land rights to forest dwelling communities. Since then, there have been nearly 900,000 forest rights claims in Chhattisgarh but land titles have been given to less than half of these claims, as per recent data from the ministry of tribal affairs.

ST voters could be further alienated by the recent controversy over the Scheduled Caste and Scheduled Tribe (Prevention of Atrocities) Act and the stance some BJP leaders have taken on the issue.

Another point of dissatisfaction is farmer distress. Agriculture incomes in Chhattisgarh remain among the lowest in India and this, combined with the state’s general impoverishment, could push voters into alternative choices. Natural anti-incumbency tendencies could further hurt the BJP’s chances.

To prevent voter fatigue in the upcoming elections, the BJP have replaced 16 sitting members of legislative assembly (MLAs) with fresh candidates but, according to the BJP’s candidate list, at least 29 BJP MLAs will still be running for elections again. Like in Madhya Pradesh, these conditions are conducive for a Congress victory but even here the Congress has been hindered by factionalism.

In 2016, Ajit Jogi, the first Chhattisgarh chief minister, defected from the Congress to form a new party (the Chhattisgarh Janata Congress). Since then, the new party has allied with the Bahujan Samaj Party (BSP).

While the BSP only accounted for 1 seat and less than 5% vote share in 2013, an alliance with Jogi, a popular Chhattisgarh leader, could eat into both the Congress and BJP’s vote share. For both parties, a Chhattisgarh victory would boost their 2019 general election campaigns.

This is the concluding part of a two-part data journalism series on elections in Chhattisgarh. To read the first part, click here.