New Delhi: Heena Singla, 21, a graduate of Amritsar’s Guru Nanak Dev University, had wanted to pursue postgraduate business studies since her teens. But Amritsar, a Sikh spiritual centre, hardly offered a choice. So she applied to Symbiosis Institute of Business Management in Pune, and received an interview call. Her parents, however, weren’t keen on sending her so far. 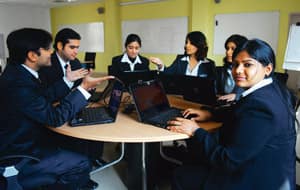 Schools such as SOIL and Mumbai Business School (MBS), which admitted their first batch this academic year, cater to the growing market for private business schools, but with a difference.

Unlike most private schools, they are owned and run by professionals, not businesspeople, and have links with industries. To launch MBS, A. Mahendran, managing director of Godrej Sara Lee Ltd, teamed up with Bobby Agarwal, a former chief operations officer of Godrej-Hershey Ltd, and Santosh Desai, chief executive of Future Brands Ltd.

SOIL has signed on 30 companies, including the Aditya Birla Group and the Mahindra Group, which provide executives and office space for admission interviews, offer feedback on curriculum and may even help in job placements. Max India Ltd’s Analjit Singh is a co-promoter.

There’s another thing that sets apart SOIL and MBS.

Most private schools are run as charitable trusts or societies, which cannot work for a profit. They file their accounts to a registrar of societies or a charity commissioner, away from the public gaze.

SOIL and MBS operate as private, closely held companies, which can earn a profit. This is different even compared with Indian School of Business, or ISB, in Hyderabad, which begins its 10th anniversary celebrations in December, and Great Lakes Institute of Management in Chennai, started in 2004.

ISB and Great Lakes function as limited companies under section 25 of the Indian Companies Act, 1956, formed for “promoting commerce, art, science, religion, charity or any other useful object". Just like trusts, they cannot earn a profit or pay dividends to their promoters.

SOIL and MBS can do both—earn a profit and pay dividends. Unlike ISB and Great Lakes, they cannot accept donations.

“We rely on equity capital," said Mahendran, the major promoter of MBS and co-promoter of Great Lakes.

Mahendran’s boss Adi Godrej was one of those who helped set up ISB, along with industrialists Anil Ambani, Rahul Bajaj and others.

Mahendran did not disclose how much he invested in MBS, saying that would be a violation of a confidentiality agreement among shareholders.

Being private companies puts the schools outside the purview of the All-India Council for Technical Education (AICTE), the controversial regulator of private business and engineering schools in India that faces accusations of bribery and opacity which the government has promised to reform. One of the first conditions of AICTE’s guidelines is that the school must function as a trust.

“Most of our students have resigned from jobs in a year of recession for (joining) a school that has chosen not to get government recognition or AICTE approval," said Anil Sachdev, founder and chief executive of SOIL, who started his career with Tata Motors Ltd.

Sachdev added that stories of corruption and the requirement of permission for even basic changes such as increasing seats and introducing new curricula drove him away from AICTE.

SOIL admitted 23 students for a course in human resources leadership for a fee of Rs7.25 lakh each, and 38 students to study business leadership at a fees of nearly Rs9 lakh. MBS took in two classes of 30 students each for a programme in management, at a tuition fee of Rs8.5 lakh each.

Mint could not find data on how many private higher education institutions are run as private, closely held companies, which can earn a profit.

AICTE’s acting chairman S.S. Mantha, who was appointed in August after the former chairman was investigated by a Central investigation agency for corruption, said the regulatory body does not keep track of such institutes.

“For us they don’t exist," Mantha said, adding he had “no means to know" about their number.

He protested against the accusations that the schools make against the regulatory body, and said he is trying to introduce transparency in the mechanism of inspections at engineering and business schools, a lucrative and growing area of higher education.

“If you have remained outside the procedure and you say AICTE is not proper, then it is not fair," said Mantha.

Mahendran, Agarwal and Desai launched MBS because all of them felt management graduates were not “industry- ready". Even graduates from the Indian Institutes of Management, the country’s premier business schools, need training for two to three years “before we get value out of them", said Agarwal.

Mahendran, a graduate of Chennai’s Loyola College and a chartered accountant, next plans to open a business school in Kolkata.

Agarwal, who has a masters in business administration from the University of Cincinnati, US, uses his contacts to help students get internships. Although he has returned to the US as director of Hershey Ltd, he said his involvement with MBS will continue.

This personal touch means recruiters are more willing to take students of these schools as interns. Standard Chartered Bank Mumbai’s investment adviser Bishen Bhalla, for instance, is grooming his first trainee. Yezdi Mehta of MBS will be with him for two months to learn how to prepare investment options for wealthy clients.

“The root of the entire process is the promise we see from their (school’s) end," said Bhalla.

Similarly, helping out SOIL means the business groups can hire better prepared employees. “The curriculum meets a lot of industry needs. (It is about) holistic development along with business leadership," said Allen Sequeira, executive vice-president of corporate human resources at the Mahindra Group, one of the conglomerates assisting SOIL.

Sequeira added that “we don’t assume anything" and hiring from SOIL would depend on openings.

But students such as Singla are confident, and satisfied. She said job placements would be on the basis of the “characteristics we possess", and not which recruiters the school is able to pull.