Home / Politics / Policy /  One out of four financially excluded women across the world is an Indian: Study
Back
Share Via

One out of four financially excluded women across the world is an Indian: Study

Research by Omidyar Network, a philanthropic investor, showed the number of unbanked women declining to 280 million in 2015 from 363 million in 2013

New Delhi/Mumbai: The number of financially excluded women in India fell by 20% between 2014 and 2015, helped by the implementation of the Pradhan Mantri Jan Dhan Yojana (PMJDY), according to Omidyar Network.

Research by Omidyar, a philanthropic investor that puts money in both for-profit and not-for profit organizations, showed the number of unbanked women declining to 280 million in 2015 from 363 million in 2013.

The PMJDY, launched in August 2014, is aimed at ensuring that every household has at least one bank account. According to the PMJDY website, 247.4 million accounts have been opened under the programme so far.

Financial inclusion among Indian women is driven primarily by access to bank accounts. According to a research report by Omidyar, there was a reduction of 6 percentage points in the gender gap in ownership of savings accounts from 17% to 11% between 2013 and 2015. 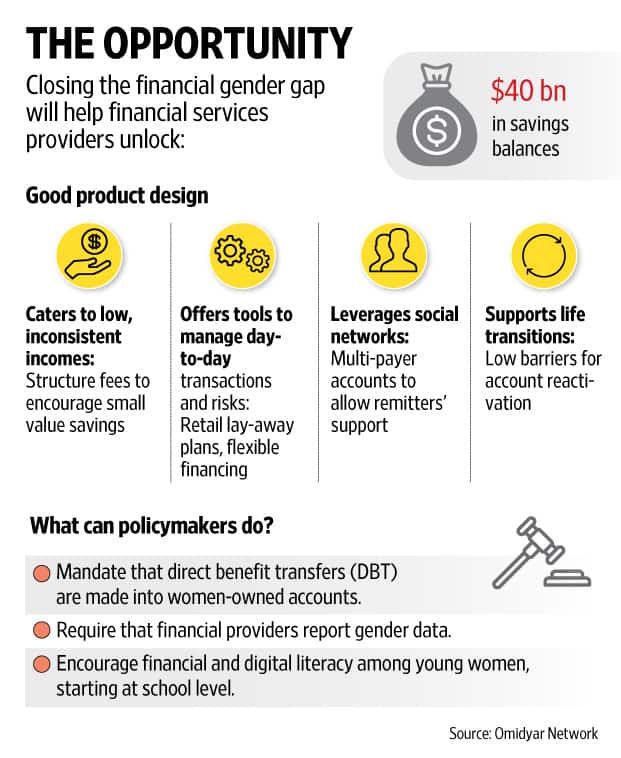 The investment firm said one out of four financially excluded women across the world is from India, which has a 14% gender gap in access to financial services. Nearly 62% of all women in the country don’t have access to bank accounts or are not active users of accounts.

The gender gap persists in financial inclusion despite encouraging progress in the number of first-time bank account holders. That’s because of a number of barriers to access across the country.

“We have 280 million people who still don’t have access to bank accounts. Even though the access has improved, the usage of bank account is low," said Roopa Kudva, a partner at Omidyar Network.

To reduce the financial inclusion gender gap, the report suggested steps such as providing access points like community schools and hospitals and leveraging women’s networks to increase financial and digital literacy.

“...we believe that there is a huge opportunity to provide tailor-made products for women. We believe in savings alone, the size of the market is about $40 billion, which is like 10% more of the total savings bank deposits in the country today.... So, clearly, the way forward is in coming up with products and services which cater specially to women because it is big market opportunity," Kudva said.

The percentage of women in developing economies with formal financial accounts increased by 13 percentage points.

By the end of this year, the company will take the total amount it has invested in India to $200 million across 70 different companies. It invests through equity and grants.

Established in 2004 by eBay founder Pierre Omidyar and his wife Pam, Omidyar Network’s primary markets are in the US, India and Africa. India is its first market outside US.