Home >Politics >Q&amp;A | Ashok Chawla: The objective is to have more capital expenditure

Q&amp;A | Ashok Chawla: The objective is to have more capital expenditure

Q&A | Ashok Chawla: The objective is to have more capital expenditure

Mumbai: As part of the Mint debate in Mumbai on Friday, finance secretary Ashok Chawla touched on key aspects of the Budget and government finances in a discussion with moderator Tamal Bandyopadhyay. Edited Excerpts: 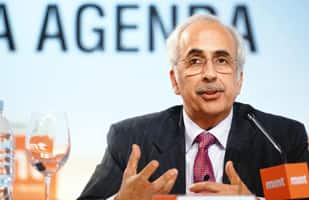 Straight talk: Finance secretary Ashok Chawla says fiscal health will be the guiding principle for the government for the next few years. Abhijit Bhatlekar / Mint

It’s not financial jugglery. We have some benefit from the revised GDP numbers. I have no hesitation in admitting that otherwise the deficit would have been 7.1%. We should give some credit (to the government) for in this difficult year the expenditure has not ballooned or gone very much beyond what was anticipated.

The estimated fiscal deficit for 2011 has come down from 6.7% to 5.5%. The government hopes to raise Rs75,000 crore through divesting its stake in PSUs and sale of 3G licenses. Besides, there is less provision for oil subsidy. These are all one-off items. You have not yet started addressing the structural deficit.

I won’t say that. On one hand we provided for some increase in expenditure but that’s not very high. Between planned and non-planned, the total increase is not more than about 8%. Some people say in real terms, it’s not very great increase in spending but this is on a high base. On the revenue side, we are still continuing with some rates which haven’t gone back to the original rate. We also had some giveaways on the direct tax side. Within this constraints, 5.5% is something is eminently doable. The two items that you have refered to, yes they are very much there. 3G spectrum is one off but you can’t really say disinvestments is a one off item.

You have promised higher capital expenditure – Rs1,50,025 crore. In the current fiscal, you have not been able to achieve even a lower capex target. The original target was Rs1,23,606 crore and you have spent Rs1,15,192 crore. Is the high target achievable?

It’s not half-hearted. It’s just that we cannot do it on the revenue side. (This is) not because we are borrowing for revenue expenditure. But there are many items to expenditure where money goes to the state government and in terms of housing classification it is termed as revenue expenditure. So it’s not that we don’t realize the importance of cutting the revenue deficit. It is very crucial. In fact, it’s more important than the fiscal deficit. But for 2010-11 it is not doable and we are very transparent. We are not hiding the numbers.

The Fiscal Responsibility and Budget Management Act – FRBM – was temporarily shalved in 2009 after the global meltdown. Had the FRBM been alive, the fiscal deficit target for current fiscal could have been 3%. Now that you have accepted the 13th Finance Commission report, is it safe to presume that FRBM is dead?

If your tax collection is on lower rates, next year as the industry representatives will tell you, the Cenvat tax is higher from 8% to 10%. The other part is the nominal GDP growth that we have assumed in the Budget is 12.5%. On a nominal 12.5% GDP growth with tax rates going up, 18% is very doable and in fact if you ask my opinion today, although I won’t like to bet on that, we are going to improve on that number.

You have brought down direct tax. So the salaried people will get the benefit. But by raising indirect tax – excise duty on fuel and so on – you have increased the burden on aam aadmi.

I think there is always you give something, you take something.

Any text book on public finance says direct tax is progressive and indirect tax is regressive. When India started reforms in 1991, 90% of our tax collection was indirect tax. Since then, the ratio has become almost 50:50. Given this background, isn’t the Budget proposal of cutting direct tax and increasing indirect tax a regressive step?

This will all get evened out when we get the structure – Direct Tax Code and the GST -- by next year. By that time, we will have a full complete architecture. Don’t read too much into these numbers.

Why did you cap NREGA? The programme ensures Rs100 for 100 days a year for rural families. But with the purchasing power going down, thanks to inflation, in real term you have actually brought down the spending.

If you are talking about the Budegt provision, I think we have provided Rs41,000 crore for NREG. But that’s not the issue. The issue is it is a demand-led obligation of the government. So wherever there is need, wherever people need employment, works will be started and provisions be made for that.

Provision for petroleum is dramatically down – from Rs14,000 crore to Rs3,000 crore. Does this mean that we will see you freeing oil prices soon?

This provision of Rs3,000 odd crore is there every year. This is for payment which have to be made for subsidy for BPL (Below Poverty line) family for kerosene and LPG cylinders and the differential in gas prices in the north east. It is taking into account what the government may give or not give for under-recovery of oil companies. The Rs14,000 crore for 2009-10 includes the under-recovery amount of about Rs10,000 crore which has been given. So irrespective of what decision is taken on the Kirit Parekh Committee recommendations, the provision for under-recovery will be made, if necessary. Even in 2009-10, the original provision was same as this year’s provision.

You have spoken about Food Security Act. If everybody is assured of food, then food subsidy will go up. But that has not been the case. does that mean that the States will have to bear the subsidy burden?

The architecture of the Food Security Act and its coverage is not yet settled. So whatever is the final decision on that, amount will be provided to that extent. I don’t think the intention is to ask the state governments to share the burden.

Expenditure on police has come down. Are you passing the burden to states?

Police is one part. There is again paramilitary forces, police housing…Now that has to be done through an entirely different route which is public-private partnership. We just approved five housing projects for central paramilitary forces in five different parts of the country. So everything need not be provided upfront in the Budget.

The economic survey has said that the government should withdraw itself from all economic activities. Budget also said that the government become an enabler. But have you walked the talk? You have not said anything on raising foreign stake in insurance, making small savings rate market driven or say other critical issues like land reforms, labour reforms … How are you signaling future policies?

On some of those areas, future policies have been indicated. Obviously everything cannot go into one particular Budget document in one year. It’s a road on which we have to travel.

In his last Budget, the Finance Minister spoke about nationalization of banks and how it saved the financial system from the global meltdown. This time he spoke about opening the banking sector to private players. What made him change his stance?

You plan to setup an apex-level Financial Stability and Development Council to monitor macro prudential supervision of the economy, including the functioning of large financial conglomerates. It will also focus on financial literacy and financial inclusion. I understand that at RBI’s insistence you have inserted a line “without prejudice to the autonomy of regulators". If you take away regulation, then what is left with RBI?

I don’t think you are very well informed on what the RBI views are. What this crisis has brought home is that there are huge amount of problems that can suddenly emerge like monsters from nowhere which we need to keep a watch on. Therefore, we need a more formal and structured approach to this issue. This is the way many western countries including the UK and US are going. The Financial Stability Development Council is nothing more. It doesn’t replace any part of the pyramid or the architecture which is in position today. it doesn’t detract from their competence, from their role. All that it does is it will have active top of the pyramid at the apex level, which we haven’t fully finalized the aspects of that.

Who will head that? Finance minister?

That’s the expectation that we will have it chaired by the Finance Minister himself but we will have all the regulators of the committee of regulators. So this will be one part of the pyramid. The other part is that the regulators will continue to work as they work within their legal provisions available to them. there will be high level coordination committee which will look at technical issues. This will look at overarching issues. I don’t think that there is anything more to it. The council is not going to breath down the neck of the regulators or the High Level Coordination Committee.

Apart from the systems, the laws themselves need to be updated. There are many laws that pre-date lot of downstream activities, pre-date setting up of regulators in those areas or allied areas. So we need to get an expert body, preferably headed by a judge which will tell us what kind of legislative financial architecture is good for the medium term and long term. I can’t say how much time it will take, but it will take a fair amount of time. It will play up in a number of years. but what we are proposing to build and what the country needs is to build an architecture that will stand the country in good stead for forty fifty years.

RBI tightened policy in January policy but did not hike rates. RBI asked the government has the government to take fiscal consolidation which you have done now. In this context, do you think RBI should go slow on rate hike?

I think you should read the governors lips for that.

Finally, you have promised to put in place the direct tax code and GST by April 2011. Once this is done, will the process of making budget change forever?

I guess, quite substantially. Because that’s the way OECD and whole lot of developed countries operate. There the Budgets are not the kind of huge statements that we take in this country because the tax levels and so on remain stable for a number of years. In those countries what they look at are financial statements and their productivity of the money which the governments are spending and they are contributing as tax payers. We will take some time to get there but the basic architecture will to some extent change.