Kashmir remains the core issue, Khan said as his party led in the Pakistan elections

New Delhi: Former cricket star Imran Khan, claiming victory in Pakistan’s general election, on Thursday pitched for better ties with India but fell back on his nation’s familiar position of Kashmir being the “core issue" between the neighbours—a stand that is rejected by India.

“The more we trade with each other the better it is for ties.... We want to improve our relations with India, if their leadership also wants it," Khan said in a speech after media reports said his Pakistan Tehreek-e-Insaf (PTI) party had won Wednesday’s election, but fallen short of majority in the national assembly. 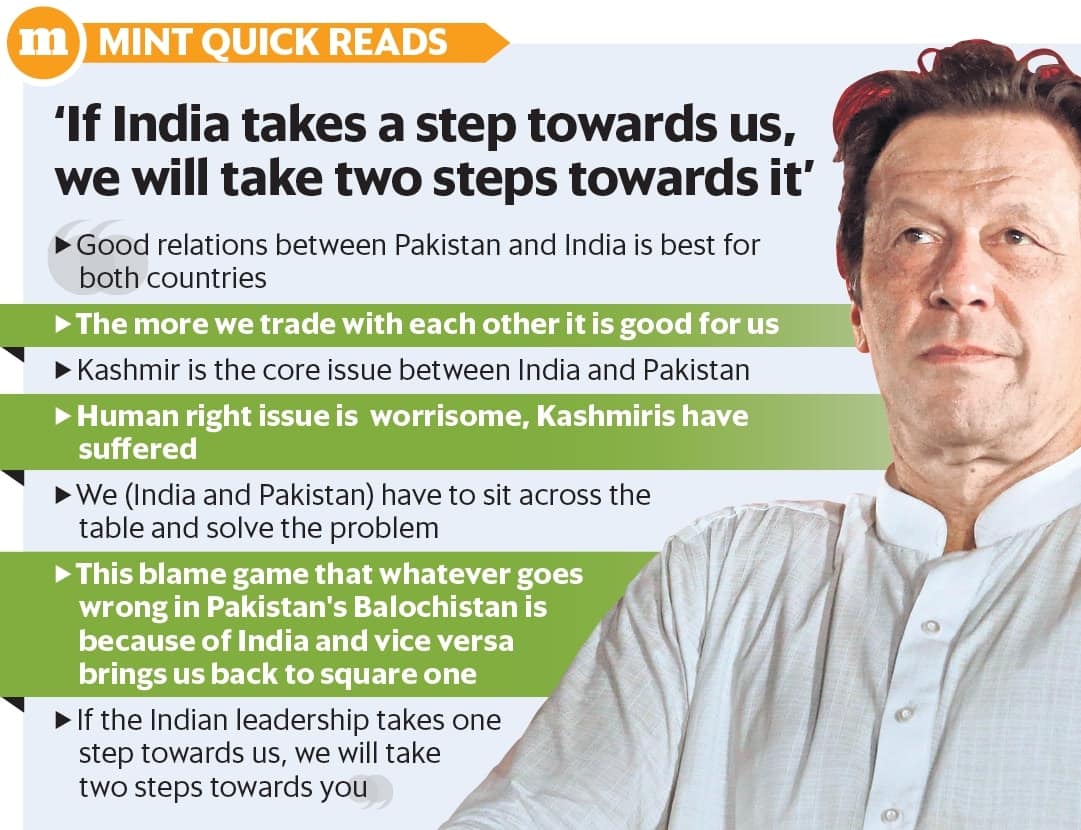 “This blame game that whatever goes wrong in Pakistan’s Balochistan is because of India and vice versa brings us back to square one," said Khan, whose win was widely seen as being aided by the Pakistan Army.

“Kashmir is the core issue between the two countries and it should be resolved through talks," he said, adding that the presence of the Indian Army in civilian areas of Kashmir led to human rights violations.

Analysts were unsure if the installation of Khan’s civilian administration—only the second such smooth transition of power in Pakistan—would open a window for talks with India, given his strong dependence on the Pakistan Army.

The PTI manifesto talks of “improving our (Pakistan’s) relations with our eastern and western neighbours". It also promises to “work on a blueprint towards resolving the Kashmir issue within the parameters of the UNSC resolutions", which India rejects as outdated.

“Khan is likely in the short term to be guided by the army’s preferences on Afghanistan and India," said Arun Singh, a former Indian ambassador to the US, who was also in charge of the Pakistan desk in the foreign ministry. In other words, a quick thaw in ties was unlikely.

The comments come amid a spate of news reports that Pakistan’s powerful army—which frame’s the country’s policies on India, Afghanistan, China and the US—had helped skew the election results in favour of Khan. Some news reports said the army was also helping Khan cobble up a coalition after his party fell short of a majority.

“What I have managed to pick up is that the Pakistan Army is not keen on resuming the peace process with India," said Ayesha Siddiqua, a Pakistani political analyst, by phone from London. “So, superficially, Pakistan could reach out to India saying that India should forget about Mumbai (26/11 terrorist attacks) and shake hands with Pakistan," Siddiqua said.

India-Pakistan ties have been tense in recent years with their bilateral dialogue at a standstill since 2013. Pakistan’s insistence on engaging Kashmiri separatists alongside Indian leaders on the dispute over Kashmir and the inability of the then PML-N government to clamp down on terrorism are seen as the main sticking points. India has been firm in its position that “talks and terror cannot go together"—something Islamabad sees as a deal breaker. That there have been serious violations of a 2003 ceasefire agreed to between India and Pakistan along their de facto border in Kashmir hasn’t helped matters.

Dilip Sinha, a former foreign ministry official who was also in charge of the Pakistan desk, said that Khan may be persuaded to try and build better ties with India because of the seriousness of his country’s economic problems. “Pakistan is facing a balance of payments crisis. And it will have to approach the International Monetary Fund for a bailout. In this scenario, Khan may be persuaded to ask the fundamentalists and the army to lie low for a while," Sinha said. This could mean no high-profile terrorist strikes in India—something that could give Modi the room to respond to any peace overtures from Pakistan, he said.