No progress on stalled projects while new announcements plunge

The stock of stalled projects rose to Rs10.7 trillion by end-December compared with Rs10.5 trillion at the end of September

Mumbai: It will be a while before investments recover. Capital expenditure projects in India made little progress in the December quarter. The stock of stalled projects rose to ₹ 10.7 trillion by end-December compared with ₹ 10.5 trillion at the end of September, according to data from the Centre for Monitoring Indian Economy (CMIE). The quantum of stalled projects as a percentage of those under implementation remained flat at 11.8%, the same as the September quarter, but worse than the 10.6% seen in June. Stalled projects refer to those that were under implementation but got stuck along the way owing to problems over land acquisition, lack of clearances and so on. CMIE considers these to have a higher chance of revival.

Meanwhile, the propensity of a private project to get stuck remains higher than for government projects. The ratio of stalled private projects to those under implementation has risen steadily from 16.4% at the end of 2013 to 19.4% by December 2015, notwithstanding a slight improvement from September’s figure of 20%. 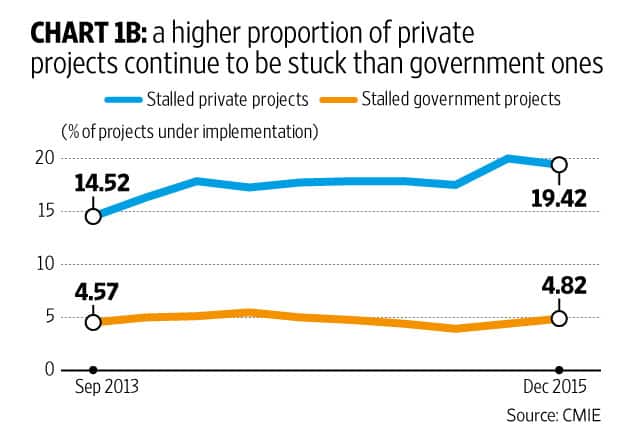 However, data from CMIE suggest that there are other reasons besides lack of funds which are behind projects getting stalled. While it is true that the quantum of projects stalled due to lack of funds showed an increase in the December quarter, more projects continue to be stalled due to lack of clearances, both environmental and non-environmental (See Chart 1C). The lack of fuel or raw materials also contributed to almost a fifth of stalled projects. Manufacturing and power together continue to account for almost two-thirds of stalled projects (See Chart 1D). Within stalled manufacturing projects, 78% are in ‘metals and metal products’ manufacturing, which is not surprising given the sharp fall in metal prices for more than a year now.

It is important that the stock of stalled projects is whittled down. For one, it will free up resources which could lead to more new projects and potentially boost investment demand. Second, it will bring some relief to the balance sheets of banks which are under stress from bad and restructured loans.

Given that the proportion of stalled projects remained flat in December after having spiked in September, it does not come as a surprise that the amount of new project announcements fell in the December quarter, measured in terms of project costs. The fall in capex intentions was pervasive across all sectors, from manufacturing to power to transport services. 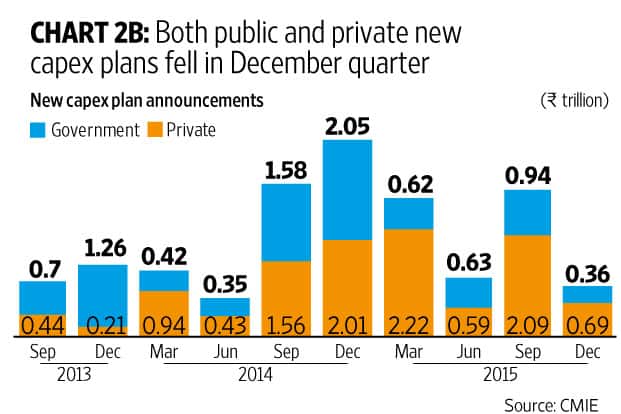 However, it should be noted that new projects, as captured by CMIE, merely refer to the announcement of an intention to invest. Typically, the project will have not received important clearances or land will not have been acquired and the sources of funds or collaborators may not have been finalized.

Given the concerns of stretched corporate balance sheets, combined with falling external demand, it remains to be seen how many new plan announcements translate into actual capital expenditure.