What should an agricultural export promotion policy focus on?

The emphasis on promoting farm exports is justified. This would provide a much needed boost to Indian farmers’ incomes. Farm exports will also earn valuable foreign exchange.

What are the challenges facing India’s farm exports?

What went wrong? Prabhu’s predecessor Nirmala Sitharaman blamed a fall in international prices and loss of competitiveness due to currency movements for India’s plummeting farm export earnings. Things are unlikely to improve in the near future. A report by the Organisation for Economic Co-operation and Development (OECD) and the Food and Agriculture Organization on the agricultural outlook, released in July this year, expects a flat to declining trend for primary commodity prices. The situation is particularly dismal for cotton, sugar and rice, which are major components of India’s agricultural export basket. 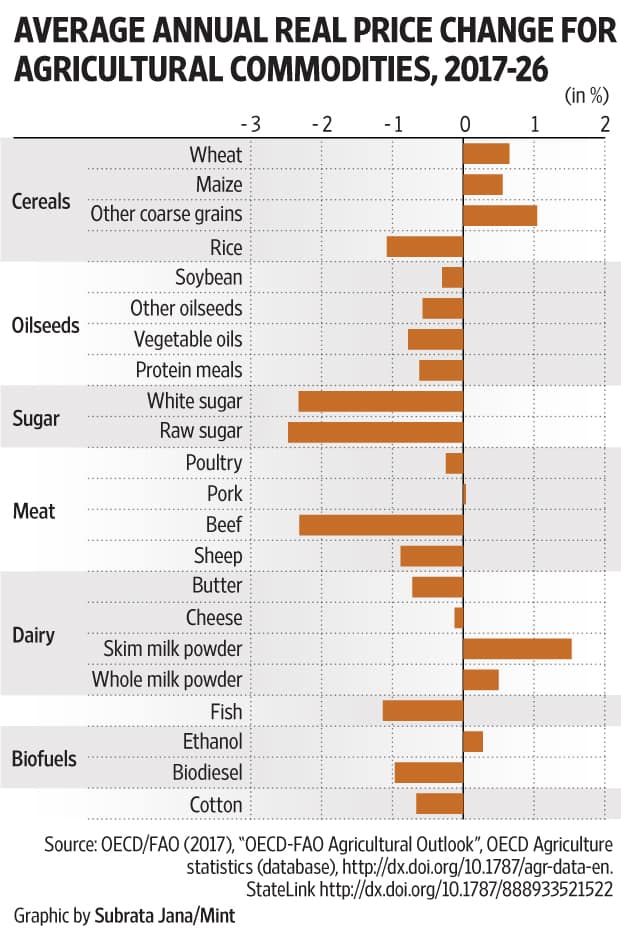 Not all of India’s farm export problems are due to global factors. A paper by Ashok Gulati, Infosys chair professor, and Shweta Saini, senior consultant for agriculture at the Indian Council for Research on International Economic Relations (ICRIER), argues that the government is unfair in putting export restrictions on important food items to prevent inflationary pressures in the domestic economy. The policy deprives farmers of higher prices in the international market and also adds an element of income uncertainty. If the government is going to impose export restrictions when international prices peak, farmers would lose part of the incentive to cultivate exportable crops. Gaulati and Saini call this a pro-consumer bias in India’s farm policy. Previous Economic Surveys have also made similar arguments.

Biswajit Dhar, a professor of economics at Jawaharlal Nehru University, sees other constraints as bigger impediments to growth in agricultural exports. “There is huge scope for exports of processed agricultural products, but for that we need effective cold chains. The government needs to put in money to push infrastructure if exports have to be increased," he said. Improvement in warehousing infrastructure would also counter inflation concerns due to seasonal factors such as poor monsoon rains, Dhar added.

India’s warehousing capacity for perishables is disproportionately concentrated in a few regions. Almost 50% of cold-storage capacity is concentrated in the states of Uttar Pradesh and Punjab. According to a report on warehousing in India by the National Institute of Public Finance and Policy released in September 2015, post-harvest losses of agricultural commodities is estimated to be at about Rs44,000 crore annually.

Then, there are policy-level challenges as well. India’s agricultural trade surplus could increase significantly if it cuts down on imports of pulses and edible oils. Pulses alone made up for close to 17% of the value of India’s total imports of agriculture and allied products in 2016-17. An earlier Plainfacts column had discussed how the cobweb effect dissuades farmers from planting crops like pulses on a consistent basis.

The cobweb effect means that higher cultivation leads to lower prices, which in turn leads to lower cultivation in the next period. The problem of bumper crops leading to a price crash can be taken care of by policies such as minimum support prices. However, large scale procurement of pulses would also make it necessary to distribute them through the Public Distribution System (PDS). India pursued the cause of legitimizing its procurement-based PDS at the WTO in the past two WTO ministerial conferences. The meeting in Buenos Aires might be Prabhu’s first big test on the agriculture trade policy front.