At a fundamental level, the concept of a common inflation rate is flawedfor different households have different consumption patterns

The latest inflation numbers (for February) came in earlier this month, and show that year-on-year consumer price inflation is at a four-month low of 5.18%. This has led to speculation that the Reserve Bank of India (RBI) may cut policy rates in its next review scheduled for April.

The weights attached to different product groups for the purpose of calculating the inflation rate present a fascinating picture of how government statisticians think India lives.

At a fundamental level, the concept of a common inflation rate is flawed—for different people and households have different consumption patterns and thus observe different inflation numbers.

However, it is important for policy purposes to define a “standard household" whose expenses can be tracked over time so that policymakers understand how prices are changing.

The current series of inflation numbers was introduced in January 2015, and indexed to 2012. In other words, indices of prices of different product groups have been fixed so that they are equal to 100 for the middle of 2012.

The weights of different product groups have been derived from the Consumer Expenditure Survey 2011-12, part of the 68th round of the National Sample Survey (NSS). (These weights are not too far off from the weights used in the earlier inflation series, which was indexed to 2010

As we can see in Figure 1, the major difference between the weights for rural and urban areas is in housing—which forms more than 20% of the urban consumer price index, but contributes absolutely nothing to the rural index. While this might appear erroneous on first examination, the fact that most people in rural areas own their houses suggests that recurrent spending on housing is minimal.

Nevertheless, the fact that cash expense on housing is close to zero doesn’t mean there is no expense at all (since there is expense involved in building and maintaining the asset), so the zero weight is surprising.

With housing being completely ignored, food accounts for more than half the rural price index.

Interestingly, and perhaps counter-intuitively, the weights for items such as “clothing and footwear", “pan, tobacco and other intoxicants" and “fuel and light" is much higher in the rural index compared to the urban index.

The higher weight for these items in rural areas can be partly explained by the fact that more than 20% of the urban index is taken up by housing, which pushes down relative weights of other components.

For this reason, it makes sense to look at weights in the urban index excluding housing, which is shown in the table. ‘Adjusted Urban Weights’ refers to the price index weights for urban areas, assuming there is no weightage attached to housing—this makes urban and rural weights directly comparable. The percentage spending on footwear and “personal care and effects" is roughly equal in rural and urban areas, while as expected, urban areas outstrip rural areas in spending on education, transport and household goods (it is likely that “fuel" as in “fuel and light" refers to cooking fuel rather than transportation fuel).

It is also pertinent to focus just on food, and see what the government statisticians think is the distribution of food consumption of rural and urban people.

In order to do this, we simply look at the weightage for different food groups as a proportion of total weightage for food for each population group.

Once again, we see that for most food groups, the weightage for rural areas is much higher than for urban.

The only other categories where urban spending outstrips rural is in fruits (8% versus 5.3%) and pulses (a marginal 14.7% versus 14.2%). Figure 2 has the full details. 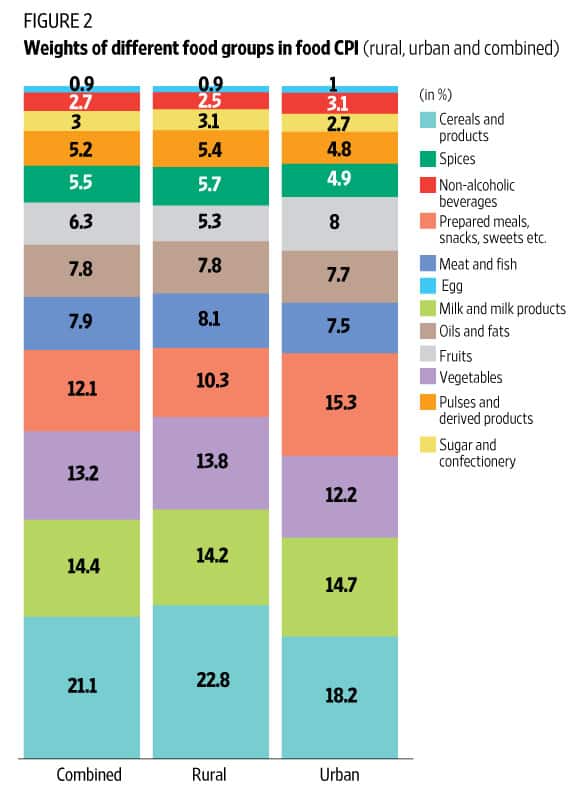 We will do so by looking at inflation of different product groups, starting with the highest level. For starters, inflation has fallen in each of the categories for both urban and rural areas, but clearly the sharpest fall has been in food and beverages.

It is also interesting to note that while inflation in “fuel and light" has dropped sharply in urban areas (in line with the global oil price decline), it has remained steady in rural areas, suggesting lower penetration of cooking gas. Firstly, inflation in vegetables, which had hit 75% in the latter half of 2013, has now cooled (even going into negative territory at times, but that is primarily due to base effects).

Simultaneously, inflation in cereals, oils and meat has also fallen significantly, which has meant that inflation has been under control despite a steep increase in prices of pulses in the past one year.