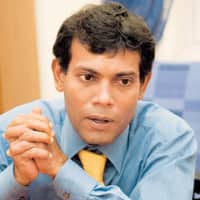 Over the last fortnight, two delegations from the Maldives — the opposition Maldivian Democratic Party (MDP) led by its presidential candidate Mohammed Nasheed and Gayoom’s Dhivehi Rayyithunge Party (DRP) led by his son Farish Maumoon — were in New Delhi to lobby for Indian support.

The island republic’s first free and fair presidential election, due to take place by 11 November, depends on Gayoom ratifying a new constitution.

India’s close relationship with Gayoom did not come in the way of foreign secretary Shivshankar Menon meeting the opposition Maldivian politicians.

Foreign office officials said this was the first time a senior Indian official had met anti-Gayoom politicians and believed it amounted to a signal to the Maldives president to allow multi-party democracy.

Gayoom’s son, on the other hand, was welcomed by minister of state for external affairs Anand Sharma, but in his capacity as a Congress party leader, the foreign office officials said on condition of anonymity.

“The DRP was in town to conduct party-to-party talks with the Congress," one official said.

Nasheed told Mint that the time had come for India, the world’s largest democracy, to take greater interest in the Maldives. “The longer India takes to respond to the authoritarian regime of Gayoom, who remains unwilling to ratify a new constitution under which free and fair elections can be held, the more it will end up looking like the British Raj," Nasheed said.

A collection of 1,192 coral islands with a population of only 320,000 people scattered south-west of India, the Maldivian archipelago is known less for concerns about democracy and more for its white sandy beaches and crystal-clear waters as well as its preoccupation with a doomsday scenario of being drowned by the sea under the impact of climate change.

Since the then Indian prime minister, Rajiv Gandhi, sent troops to crush a November 1988 attempt to overthrow Gayoom by some Sri Lankan Tamil rebels, New Delhi has largely looked to Gayoom to stave off any threats to its security interests in that part of the Indian Ocean.

Former ambassador Kuldip Sahdev, in charge of the Maldives in the foreign office when the 1988 coup took place, admitted that India has since “not made the transition" in favour of a democratic Maldives, possibly because it has been focused on other crises.

Former foreign secretary Muchkund Dubey says that, ironically, it is Maldives’ strategic importance that is forcing India “to play safe and maintain good relations with Gayoom. The government is not sure whether change will really take place and the MDP will come to power or not, so it wants to keep the status quo."

And according to Nasheed, the presence of Indian armoured personnel carriers (APCs) in the Maldivian capital, Male, has helped to silence dissent.

Nasheed said he had tried to drive home the message to the Indian establishment that the security of India was intimately connected with a democratic Maldives. Gayoom, he said, had been increasingly looking to China, as well as to hard line Islamic states such as Saudi Arabia to sustain his one-party rule. “The Chinese are coming into the Maldives in a big way. They are building our foreign office as well as the national museum," he said.

Rumours that Beijing had wanted to build a submarine base have persisted for some years, Nasheed said.

“It is extremely naïve to believe that the balance in the Indian Ocean can be maintained with the help of the Chinese," he added.

Nasheed’s compatriot and MDP politician Ahmed Naseem, who lives in exile in Sri Lanka, points out that one of the world’s busiest shipping lanes that passes by the Maldivian archipelago carries cargo worth $450 billion (Rs19.22 million today) annually.

“It is in India’s national interest to have a democratic regime in the Maldives which believes in India. Instead, there is Gayoom who plays fast and loose," Naseem said.

Naseem said the India-Maldivian connection has always been an intimate one, even if it doesn’t reach the “consciousness of the Delhi elite".

Up to the early 1960s, the entire Maldivian treasury was controlled by an Indian by the name of Abdullah Koya, who then moved back to Kerala.

As a young child, he himself was sent to study in the Jamia Millia school in Delhi and his “proudest moment" was when he received the class prize from first prime minister Jawaharlal Nehru, Naseem said.

The visiting MDP politicians said they were in regular touch with the UK, the US and the European Union to support the pro-democracy movement in the Maldives.

Nasheed, who has spent about six years in Gayoom’s jails, said that the president’s closest aides, including his brother and finance minister, had deserted him to start their own political parties.

“It’s looking a bit like the Monty Python," he added, referring to the British TV comedy show that mocked everything. “If it wasn’t tragic, it would be funny," Nasheed said.