The geography of employment in 21st century India

There is an acute shortage of regular non-farm jobs in most parts of the country, a Mint analysis shows

New Delhi: Where do Indians find regular jobs easily? Where are jobs harder to find? Are there parts of the country where regular factory jobs outnumber other kinds of jobs? Such questions are typically hard to answer because of the lack of granular jobs data in the country.

The only source that provides rich employment data at the district level and beyond is the census.

While the latest census data pertains to 2011, it provides far more granular and rich information than any other data source on jobs.

A Mint analysis of the disaggregated census jobs data released earlier this year shows a striking divergence in the availability of regular non-farm jobs across the country. Districts with a relatively high share of regular jobs were clustered in the extreme south, and in a narrow strip extending along the western coastline across the country till the extreme north, the data shows (chart 1a). Barring a few pockets, in the rest of the country, only a small minority of the workforce was engaged in regular non-farm jobs. What is even more worrying is the change over time. As the accompanying map (chart 1b) shows, districts with a high share of regular non-farm jobs have added more such jobs over time, while districts in the rest of the country have either regressed or added very few non-farm jobs between 2001 and 2011, accentuating the divide between the west and the east. 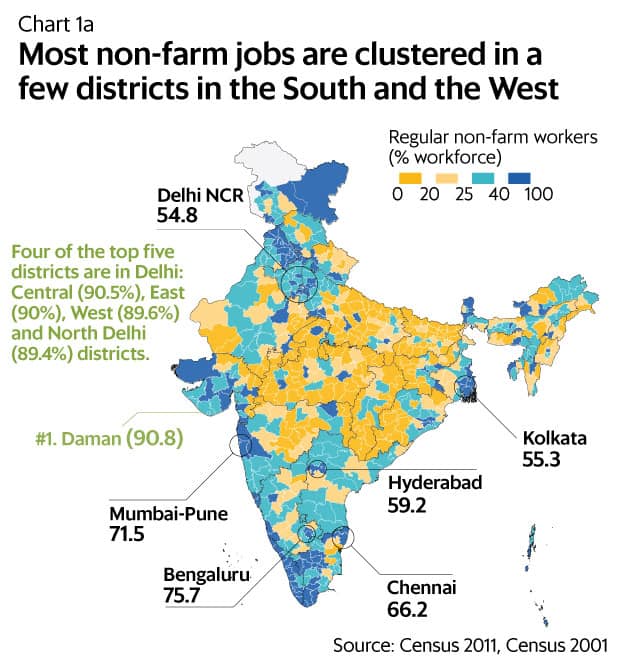 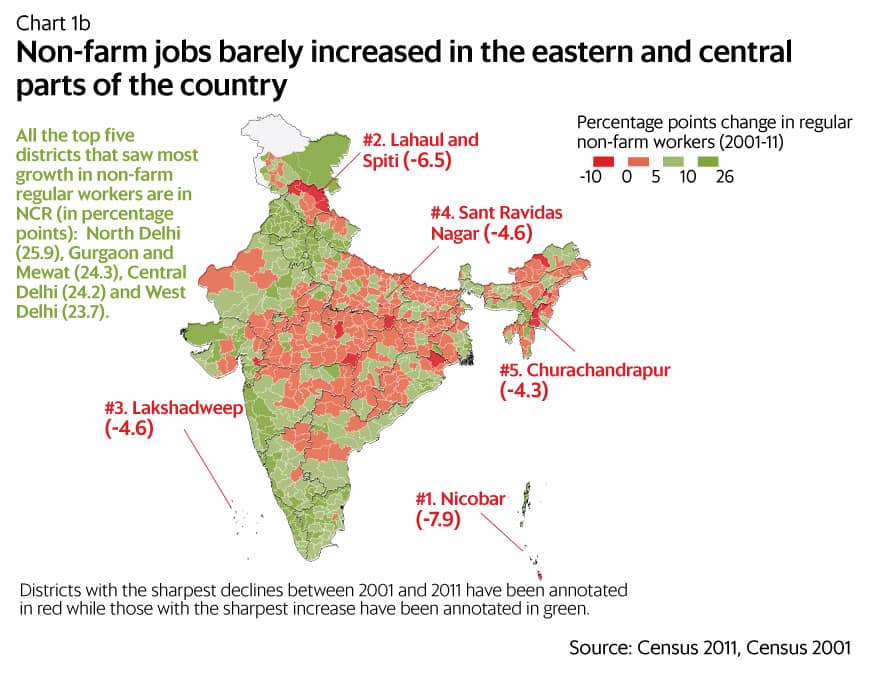 The comparison between 2001 and 2011 census data has been made by merging newly-created districts in 2011 back with their parent districts so that all comparisons are on a like-to-like basis.

Regular jobs here refer to those workers in the 15-59 age group who worked in a job for more than six months in a year, and who were classified as ‘main workers’ by the census.

Most districts in some of India’s most youthful and populous states, such as Bihar, Uttar Pradesh and Madhya Pradesh, witnessed either a decline or stasis in the share of regular jobs between 2001 and 2011.

These are the districts where the demand for jobs is the greatest, and where regular jobs are increasingly difficult to find. One big reason for the lack of much progress in creating regular non-farm jobs lies in India’s failure in manufacturing. Barely 26 of the 640 districts in 2011 had more than a fifth of their workforce employed in manufacturing. Most districts across the country actually saw the share of regular manufacturing workers fall between 2001 and 2011, the analysis shows (charts 2a and 2b). 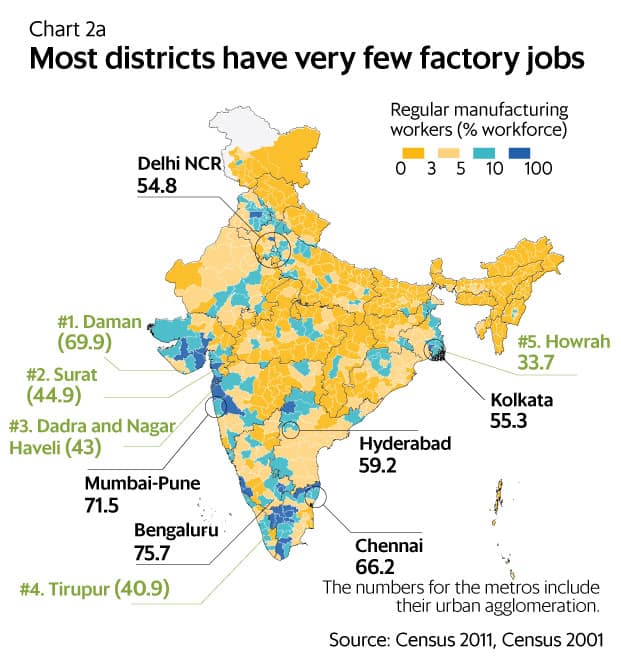 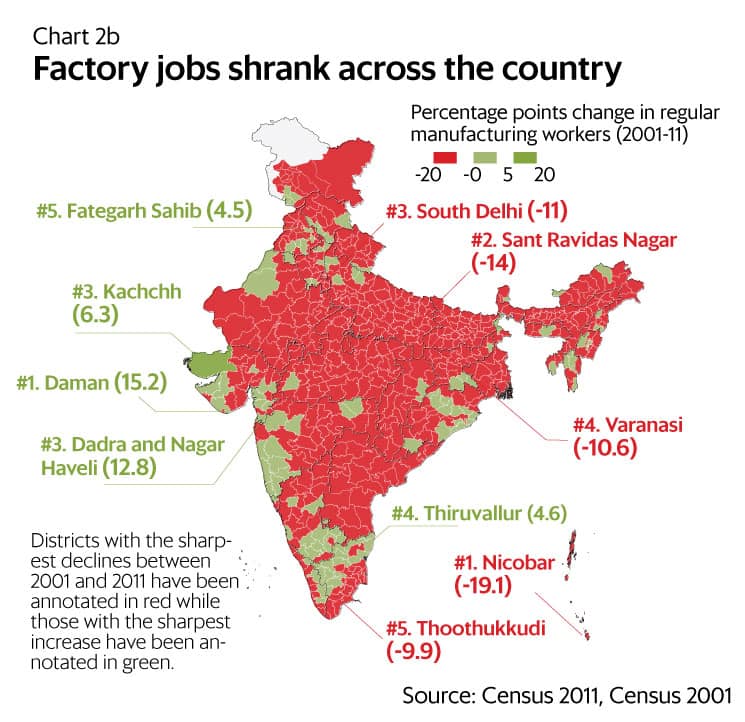 It comes as little surprise therefore that the farm sector was the largest employer across districts. The two big exceptions to this trend lie in the two extremes of the country—Kerala, where construction accounts for the lion’s share of workers across several districts and Jammu and Kashmir, where government workers make up the majority of workers across a large swathe of the state (chart 3). 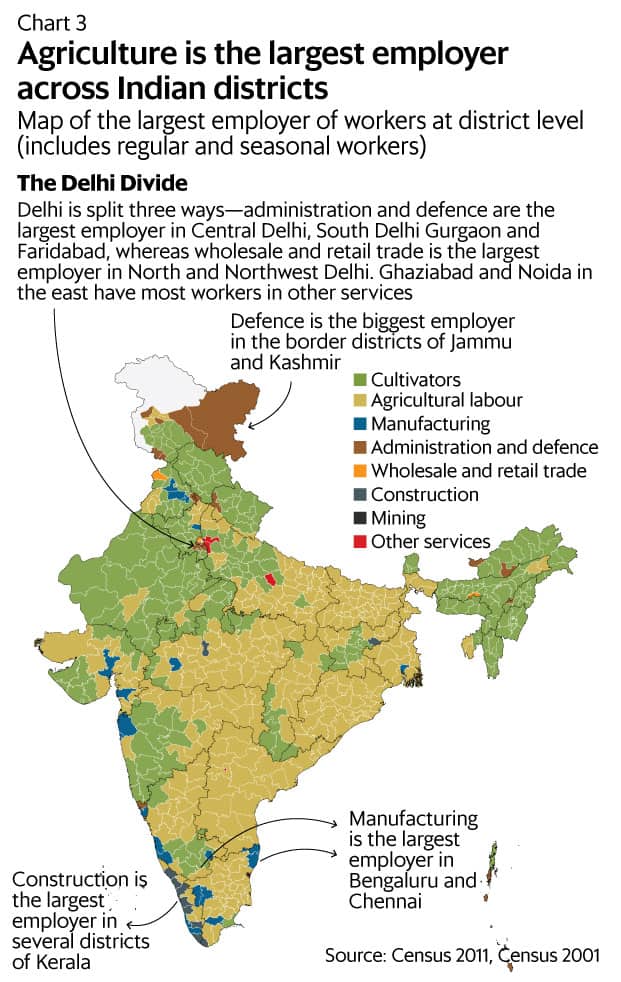 Manufacturing is the biggest employer only in a handful of districts: in the Coimbatore-Tirupur belt in Tamil Nadu, the Thane-Mumbai belt in Maharashtra, the Jalandhar-Ludhiana belt in Punjab and a few other districts scattered across the country. Till that picture changes, it is difficult to imagine an end to India’s chronic jobs shortage.

This the second of a three-part data journalism series on jobs in India. The first part examined the pace of job creation in corporate India in recent years.