The Ahmedabad municipal waste dump in Behrampura, a low-income neighbourhood on the outskirts of the city, is home to around 700 people who live and work there. It’s nicknamed Smoky Mountain owing to the blanket of smoke that hangs over the area. 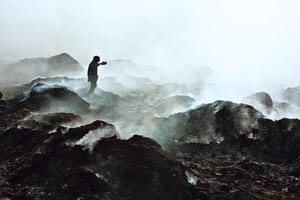 The Ahmedabad municipal waste dump is also called Smoky Mountain owing to the blanket of smoke that hangs over the area—the air is replete with methane from the burning garbage.

Bhavsar, a resident of Ahmedabad, crossed the dump everyday on his way to the institute, before deciding to get off his bus one day to work on what he calls a “social documentary". His photo series, Lost Life, is part of the PIX: A Photography Quarterly’s latest issue, which invited submissions to respond to the theme of “trespass". The fourth edition of the Indian quarterly magazine, edited by Rahaab Allana, curator, Alkazi Foundation for the Arts, New Delhi, features eight photographers: Bhavsar, Mark Esplin, Chandan Gomes, Siddhartha Hajra, Timothy Hill, Aparna Jayakumar, Devansh Jhaveri and Surendra Lawoti.

For Bhavsar, who trained in documentary photography and graphic design, the interpretation of “trespass" was violation. His series makes statements about what could have been had it not been for the violation of innocence, of opportunity, of circumstance. “(The migrants) succumb to the promise of a better life. They move to the city but all they get—if not a slum or a footpath—is this wasteland, which becomes their home," he says.

Lost Life evokes a sense of irony and contrast between circumstances and an ideal. The wasteland represents opportunities—in this case, missed. Every photograph tells a different tale: the child who lost out on an education or the woman who was forced into an unhealthy livelihood by virtue of employment in the waste disposal industry. As Allana says, “It is about the trespassing of dreams in a land where hope may be lost."

Bhavsar’s subjects are placed in the background while he foregrounds the objects in the photos (we also feature photographs from his recce shoots that were not shot in this style). “In art, like in life, there is a space—a boundary that separates the subjects from their immediate surrounding; the broken pots; the cracked mannequins: basically, the waste of the rich," says Bhavsar, who has worked in vertical poster formats because he believes his images can be used for social communication. “I visualized them as advertisements of their life," he says.

The Trespass exhibition, presented by PIX: A Photography Quarterly, will be on display from 25 February-10 March, at Max Mueller Bhavan, Kasturba Gandhi Marg, New Delhi. PIX will beavailable at the exhibition venue and in selected book stores. For details, visit www.pixquarterly.in.