New Delhi: The telecom regulator on Wednesday recommended a sharp cut in the base price for 4G airwaves and auctioning all the available spectrum, in a relief for the telecom industry caught in a bruising tariff war.

The high-value 700MHz spectrum is considered very efficient for deploying 4G LTE networks and has greater structural penetration. Trai said the 3,300-3,600 MHz band, most likely to emerge as the primary band for the roll-out of 5G services, should be auctioned as a single band and in the block size of 20MHz each.

The government has not auctioned any spectrum in 2017-18.

The regulator’s recommendations come at a time when the telecom sector is reeling under a debt of ₹ 7.75 trillion as on 31 March 2017, and a sharp fall in revenue following the sustained disruption by Reliance Jio, and its rock-bottom data pricing strategy.

Jio’s entry in September 2016 triggered a consolidation in the industry, forcing smaller companies to either shut shop or be acquired by bigger entities. Just two private operators, Bharti Airtel and the Vodafone-Idea combine, are left to fight it out with Jio. 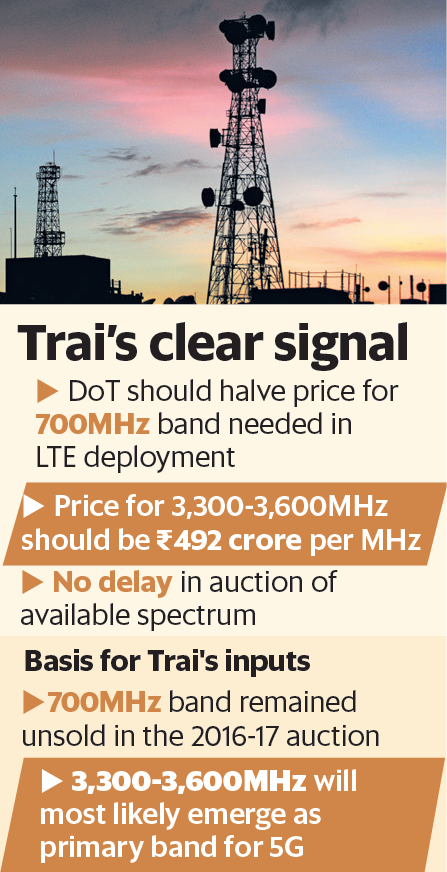 Though the suggested price cut is a step in the right direction, given that the operators had sought cheaper spectrum, it remains to be seen whether the debt-laden industry will have the appetite to participate in an auction if it were to happen anytime soon. More so, banks have also been reluctant to back telecom companies. Besides, the government will also have to take a call, given that cheaper spectrum would translate into lower revenue collection.

“Companies are starved of funds. Bharti Airtel has made a few acquisitions through which it has got some spectrum. Vodafone and Idea are merging. Even if Jio bids and other companies end up buying spectrum, it would be in very small quantities," a sector analyst said, requesting anonymity.

During consultations with Trai, most operators were of the view that the industry was going through a phase of consolidation and it was important to allow the market to settle down since prospective buyers may not be able to take a decision on spectrum purchase.

However, the telecom regulator said that “there is definite amount of visibility as far as consolidation of industry is concerned. Therefore, it would not be entirely correct to say that industry is not in a position to assess its spectrum requirements".

The Cellular Operators Association of India (COAI) was pleased with the recommendations on lowering of spectrum prices. “It is, however, important to note that considering the current financial stress the industry is going through, lowering the spectrum prices alone does not fix anything. Until and unless spectrum usage charges, licence fees and other levies are lowered, the industry may not be able to cope with the requirements for state-of-the-art infrastructure needed for new technologies and the early roll-out of 5G," said Rajan Mathews, director general, COAI.

The government is currently in the process of finalizing a road map for the roll-out of 5G services, the next-generation technology for wireless communications, which is expected to improve data speed and propel Internet of Things. Ireland, Czech Republic, the UK and South Korea have conducted 5G auctions already.

Trai also said bidders should not be allowed to hold more than 100MHz of the 3,300-3,600MHz band to avoid monopolization by an operator. The government should also not set any roll-out obligations on operators in this band, it added.

While the total spectrum put up for sale was 2,354.44MHz across seven bands, the centre had managed to auction just 965MHz.