The 2014 election campaign may have focused on growth and development but the verdict on 16 May indicates that growth laggards within India have not suffered electoral setbacks.

A Mint analysis of the latest election results shows the vote and seat shares of incumbent parties in low-growth states do not differ significantly from that of incumbent parties in high-growth states. The analysis examines growth and electoral data of 21 major states, excluding Jammu and Kashmir and North-Eastern states other than Assam. The states are categorized into three categories: high, medium and low growth, depending on their performance in the past five years.

The analysis computed growth rates in state domestic product since 2009 and considered the party (or alliance) that has been ruling a state at least two years prior to the 2014 elections as the incumbent party (or alliance). Parties that won state assembly elections recently were not considered as incumbent parties because it’s assumed that voters won’t be judging them yet on growth performance.

The set of h 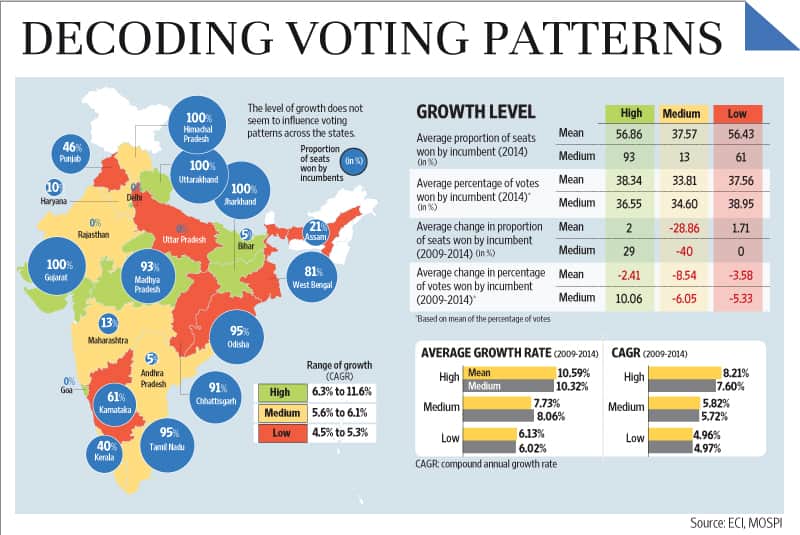 Given the skewed distribution of results within each group, the analysis also examined the median vote shares and seat shares of each group. The results are not strikingly different compared with the differences in mean.

To check if there is any consistent pattern between growth and electoral dividends across the 21 states considered, the analysis looked at the correlation between state-level growth rates and the proportion of seats won by incumbents. The correlation is low and statistically insignificant. To put it simply, it means there is no evidence of any link between state-level growth rates and proportion of seats won by incumbent parties across India.

The correlation between vote share of incumbents and growth performance is equally weak.

There is also no correlation between economic growth and the changes in vote shares and seat shares in 2014 over the 2009 elections.

To test the robustness of the analysis, and given that state-level growth rates exhibit high volatility, growth rates were calculated in two ways: by taking the arithmetic mean of each year’s growth between 2009 and 2014, and by computing the compound annual growth rate. In both cases, the correlations between growth performance and electoral performance are close to zero and statistically insignificant.

Several recent studies have stressed the importance of economic growth in determining the choices of voters. Recent research on state assembly election results by political scientists Milan Vaishnav of Carnegie Endowment, and Reedy Swanson of the University of Virginia suggests voters had increasingly come to reward state governments that deliver better growth performance in the 2000s.

An analysis of 2009 Lok Sabha election results by economists Poonam Gupta of the National Institute of Public Finance and Policy and Arvind Panagariya of the University of Columbia showed incumbent parties fared much better in high-growth states than in low-growth states.