Registry costs and all technological support on building the website would be free for a year before monthly pay-as-you-go fees kick in.

“The initiative aims to break down the barriers that stop small businesses from getting online by offering a quick, easy and free tool to set up and host a website," Google said in a press release. (AFP)

Apparel firm Arvind Ltd said on Wednesday it has divested its minority stake of 40% in VF Arvind Brands to VF Mauritius for Rs257 crore in an effort to reduce debt. (Reuters)

Bajaj bike sales up 7% in October

The country’s second largest two-wheeler maker Bajaj Auto on Tuesday reported 6.46% increase in its motorcycle sales in October at 3,51,083 units. 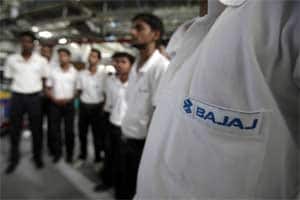 In the three-wheeler category, company said its sales stood at 44,191 units as against 41,040 units in the same month last year, registering a jump of 7.68 per cent.

In September, GAIL said it had agreed to buy a 20% stake in one of Carrizo Oil & Gas Inc’s shale gas assets in the United States. (Reuters)

Barclays Capital is the sole arranger to the deal.

The pay-in date for the issue is 4 November, said a source. (Reuters)

Bihar chief minister Nitish Kumar on Tuesday said he was, in principle, in favour of the right to recall elected representatives of the people, but said a debate was needed on the issue.

“Being a follower of Loknayak Jayaprakash Narayan, I am, in principle, in favour of Right to Recall," Kumar told reporters in Patna.

“But it will be better to have a debate over the demand for Right to recall or Right to reject," he said. (PTI)

The ICC may now initiate fresh investigations against Pakistani players Kamran Akmal and Wahab Riaz following the conviction of their team-mates Salman Butt and Mohammad Asif in the spot-fixing scandal.

According to a report in the Daily Telegraph, the guilty verdicts handed out to Butt and Asif by the Southwark Crown Court here yesterday, could form the basis of a fresh anti-corruption probe against wicketkeeper Kamran and left-arm pacer Riaz, whose names appeared during the entire controversy.

Greek referendum may be brought forward to December

Greece’s planned referendum on its latest bailout deal may be brought forward by about a month to December, the country’s interior minister said on Wednesday.

“There is a possibility to hold the referendum earlier (than January), within December," Interior Minister Haris Kastanidis said on state television.

This would happen if Greece and its international partners work out the details of the bailout agreement earlier than planned, Kastanidis said. Kastanidis had said earlier this week that the referendum would most likely be held in January. But government spokesman Ilias Mosialos said earlier on Wednesday, without elaborating, that it would be held as early as possible. (Reuters)