More than 200 killed in Syria’s Homs before UN vote

Beirut/Munich: Syrian forces killed more than 200 people in an assault on the city of Homs, activists said, the bloodiest day of an 11-month uprising against President Bashar al-Assad, ahead of a Saturday vote on a UN resolution calling for him to cede power.

The Arab League, Europe and the United States are trying to persuade Assad’s veto-wielding ally Russia to let the Security Council pass a resolution backing an Arab call for Assad to transfer powers to a deputy. Moscow said passing the resolution without amendments risked “taking sides in a civil war". 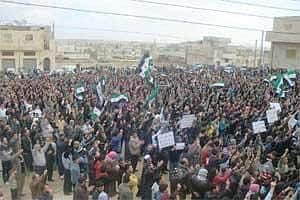 Residents said Syrian forces began shelling the Khalidiya neighbourhood at around 10.30 pm (1800 GMT) on Friday using artillery and mortars. They said at least 36 houses were completely destroyed with families inside.

“We were sitting inside our house when we started hearing the shelling. We felt shells were falling on our heads," said Waleed, a resident of Khalidiya.

“The morning has come and we have discovered more bodies, bodies are on the streets," he said.

“Some are still under the rubble our movement is better but there is little we can do without ambulances and other things."

An activist in the neighbourhood contacted by Reuters said residents were using primitive tools to rescue people. They feared many were buried under rubble.

“We are not getting any help, there are no ambulances or anything. We are removing the people with our own hands," he said, adding there were only two field hospitals treating the wounded. Each one had a capacity to deal with 30 people, but he estimated the total number of wounded at 500.

“We have dug out at least 100 bodies so far, they are placed in the two mosques."

A third Khalidiya resident, speaking by telephone with wailing and cries of “Allahu akbar" (God is greatest) audible in the background, said at least 40 corpses had been retrieved from streets and damaged buildings.

Syria denied shelling the area and said internet video of corpses was staged. It is not possible to verify activist or state media reports as Syria restricts independent media access.

As news of the violence spread, crowds of Syrians stormed their country’s embassies in Cairo, London and Kuwait in protest, and rallied outside Syrian missions in Germany, Greece and the United States.

It was not immediately clear what had prompted Syrian forces to launch such an intense bombardment, just as diplomats at the Security Council were discussing the draft resolution supporting the Arab League demand for Assad to give up powers.

The Security Council was due meet at 7.30 pm. Russia’s foreign minister made clear Moscow would veto the resolution if it was presented without amendments it has demanded.

“If they want another scandal for themselves in the Security Council, then we probably cannot stop them," Itar-Tass news agency quoted Sergei Lavrov as saying in an interview.

Lavrov later told a security conference in Munich: “We are not saying that this resolution is hopeless." Russia’s main objection was that the resolution contained measures against Assad, but not against armed groups opposing him.

“Unless you do it both ways, you are taking sides in a civil war," Lavrov said.

US Secretary of State Hillary Clinton told the conference: “As a tyrant in Damascus brutalises his own people, America and Europe stand shoulder to shoulder. We are united, alongside the Arab League, in demanding an end to the bloodshed and a democratic future for Syria."

“And we are hopeful that ... the Security Council will express the will of the international community," she said.

Russia has balked at any UN Security Council language that would open to door to “regime change" in Syria, a Middle East ally where Moscow operates a naval base.

Video footage on the Internet showed at least eight bodies assembled in a room, one of them with the top half of its head blown off. A voice on the video said the bombardment was continuing as the footage was filmed.

Syria’s state SANA news agency denied Homs was shelled, accusing rebels of killing people and presenting them as casualties for propaganda purposes before the UN vote.

“The corpses displayed by some channels of incitement are martyrs, citizens kidnapped, killed and photographed by armed terrorist groups as if they are victims of the supposed shelling," it quoted a “media source" as saying. The Syrian government says it is facing a foreign-backed insurgency and that most victims of violence have been members of its forces.

Some Syrian activists said the violence was triggered by a wave of army defections in Homs, a stronghold of protests and of the armed insurgents Assad has vowed to crush.

“The death toll is now at least 217 people killed in Homs, 138 of them killed in the Khalidiya district," Rami Abdulrahman, head of the British-based Syrian Observatory for Human Rights, told Reuters, citing witnesses.

“Syrian forces are shelling the district with mortars from several locations, some buildings are on fire. There are also buildings which got destroyed."

The opposition Syrian National Council said 260 civilians were killed, describing it as “one of the most horrific massacres since the beginning of the uprising in Syria".

Another group, the Local Coordination Committees, gave a death toll of more than 200. The opposition council said that it believed Assad’s forces were preparing for similar attacks around Damascus and in the northern town of Jisr al-Shughour.

“It does not seem they get it. Even if they kill 10 million of us, the people will not stop until we topple him," said an activist reached by Reuters in Hama, another restive city.

In Cairo, a crowd stormed the Syrian embassy smashing furniture and setting fire to parts of the building in protest over the Homs bloodshed. The gate of the embassy was broken and furniture was smashed on the second floor of the building.

In London, 150 people hurled stones at the Syrian embassy, smashing windows and shouting slogans. Police said five men were arrested after breaking into the building and another held for assaulting police. Kuwait’s KUNA news agency said Syrians broke into the embassy there at dawn, tore down the flag and injured several security guards.

Demonstrations also took place at embassies in the United States, Germany and Greece.

In the cities of Hama and Idlib, activists said hundreds of people took to the streets in solidarity. They chanted in Idlib: “Homs is bombarded, and you are still sleeping