Thanks for Visiting Mint
You seem to have an Ad Blocker on. Please turn it off in order to continue, or whitelist Mint
HOW TO TURN OFF AD BLOCKER
OR
REFRESH IF YOU ALREADY TURNED OFF THE AD BLOCKER
Home >Politics >Policy >Finding the ‘missing $15 billion’ in Budget 2016

Analysts are unable to ascertain the amount budgeted by the government to implement the decadal pay hike for its employees, estimated to cost around $15 billion; a closer look reveals that it has mostly been accounted for

A Bloomberg report on Wednesday titled “Missing: $15 billion lost somewhere in India’s 1,500-page budget" raised a red flag on the Indian government’s balancing of its books in Budget 2016. It pointed out how the global financial data provider and other analysts were unable to locate the numbers allocated for implementing the recommendations of the Seventh Pay Commission (SPC), which doles out the once-in-10-years pay hike given to central government employees. The allusion was the government may have understated this payout—and, by extension, its deficit.

We tried to locate those “missing" numbers in the same budget documents. First, we need to know how much it will cost the government to implement the SPC recommendations. The estimate for 2016-17 by the SPC is a 24% increase in payouts to government employees, or ₹ 102,100 crore (around $15 billion). 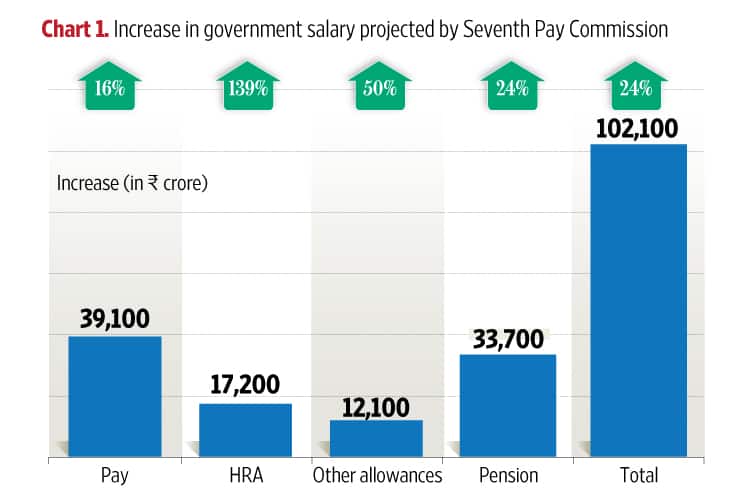 The first place to look for is under non-plan expenditure, and a table titled “Estimated strength of establishment and provision thereof". This details how many employees are there in 56 government departments (excluding defence) and how much the government has budgeted to pay their salaries: an increase of ₹ 65,690 crore in 2016-17. Thus, we have accounted for around 65% of SPC’s impact. 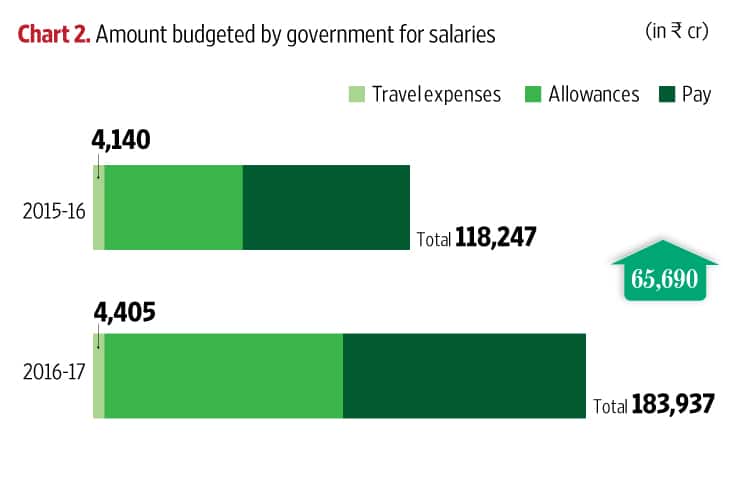 The second place to look for is pensions, the details of which are again provided under non-plan expenditure. This shows the government has budgeted for an increase of ₹ 37,066 crore. Thus, the total increase in salary and pension bill in 2016-17 is ₹ 102,756 crore. However, there is one rider. The pension liabilities include increased outgo on account of implementing the One Rank One Pension (OROP) scheme.

Implementing OROP is estimated to cost the government ₹ 7,500 crore. Deducting this amount means the government has budgeted ₹ 95,256 crore to meet SPC recommendations. In other words, the net shortfall in budget estimates on account of implementing the SPC is ₹ 6,844 crore.