New Delhi: Despite sharpening its focus on it with a dedicated ministry, the government has failed to achieve its targets for Skill India, pointing to the enormity of the task in a country that is seeking to rapidly scale up its competitiveness through its human resources.

As per data collated by the National Skill Development Agency (NSDA)—part of the newly created ministry of skill development and entrepreneurship—21 departments and ministries trained 7.6 million people in 2014-15, as against a target of 10.5 million people.

In other words, central ministries and departments fulfilled 72% of their target in the last fiscal, almost identical to the figure notched up by the previous government in 2012-13. The NSDA has been collating skill training outcomes for the last four years.

Among the ministries, five missed the target by at least half, with four among them reaching less than a quarter. The ministry of housing and urban poverty alleviation managed just 7.37% of its target, home affairs 7.83%, the department of higher education trained just 24.67% and the ministry of social justice 24.72% of their targets.

Mint has reviewed the skill training data compiled by the NSDA.

The good performers included the ministries of labour and employment, tourism, food processing, and the national skill development corporation. They exceeded their targets, helping to take up the overall tally.

“In the last one year, the government at the highest level has talked about the need for skill development and reaping the demographic dividend. But the latest data is not very encouraging," said a government official, who declined to be named. 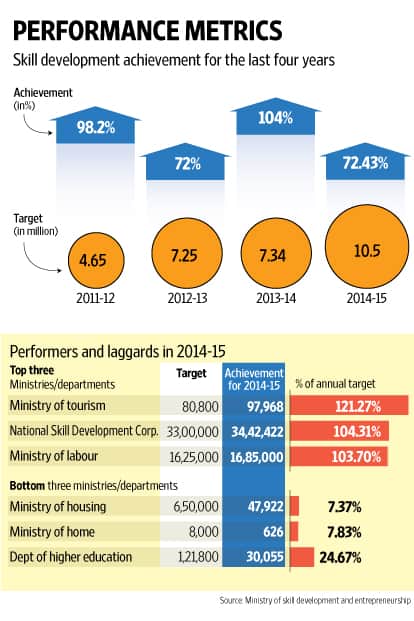 “All departments need to improve their performance and the new skills ministry has to make sure that implementation is on track," said the official, adding that in 2014-15, the country for the first time set a target of training over 10 million people.

J.P. Rai, a former director general of the NSDA, said better implementation of schemes is the key. Instead of just focusing on training, there should be a greater focus on connecting trainees with jobs and tracking them over a period of time, he suggested.

“There is just not a shortfall— you will realise that suddenly towards the end of the financial year, the number goes up in some departments. Currently, skill development is largely focused on training and certifying and that’s a key issue—you must give placement to 70% of the trainees. Training without job surety is not going to help," said Rai.

“The new ministry should make sure that the skill development initiatives are not used for improving the top line of skill training companies," he added.

India has the potential to benefit from an immense demographic dividend.

However, companies, corporate executives and analysts have all pointed to the shortage of a skilled workforce in India. Many companies put their hires, including graduates from some of India’s best colleges, through months of classroom training.

With 13 million young people entering the labour force each year, increasing their skills-base will have to be a priority for the country to gain from the demographic dividend, Onno Ruhl, the World Bank’s country director for India, said on 10 November after signing a $200 million loan agreement to enhance the productivity of micro, small and medium enterprises.

Pankaj Narula, executive director (service) at car maker Maruti Suzuki had told Mint last month that the expanding automobile sector is finding it difficult to get enough trained technical manpower and that that’s one reason they are adopting Industrial Training Institutes (ITIs) in several cities of India.