India's IP administration, which was widely criticized for lack of transparency in the initial years, has made its file movements and examination process public in just the first step

Every time an innovation survey is released, there is a collective groan about India’s slide in rankings. But are private firms and public institutions in India doing enough to climb the innovation rankings? Not if one looks at the number of patent filings.

Although the number of applications continues to pile up at India’s patent office, the volume of filings by residents hasn’t shown any significant improvement. According to data available with the Controller General of Patents, Design and Trademarks, applications by residents are only about one-fifth of the total 286,000 patents filed in the eight years to 2012-13. That is far lower than the numbers for comparable nations such as Russia and China, which are part of the BRICS grouping. Worldwide, there were 2.35 million patent applications filed in 2012. India’s contribution to the total number of filings stood at a low 1.8%.

“Patents are filed for technology-based innovations and most of Indian businesses are…service providers. Even the huge IT (information technology) workforce is not able to develop innovative products to catch up with global trends," said Rahul Dev, patent attorney, Tech Corp Legal. For 236 listed manufacturing companies whose data was available for the last five financial years, research and development (R&D) expenses as a proportion of sales averaged less than 0.5%. 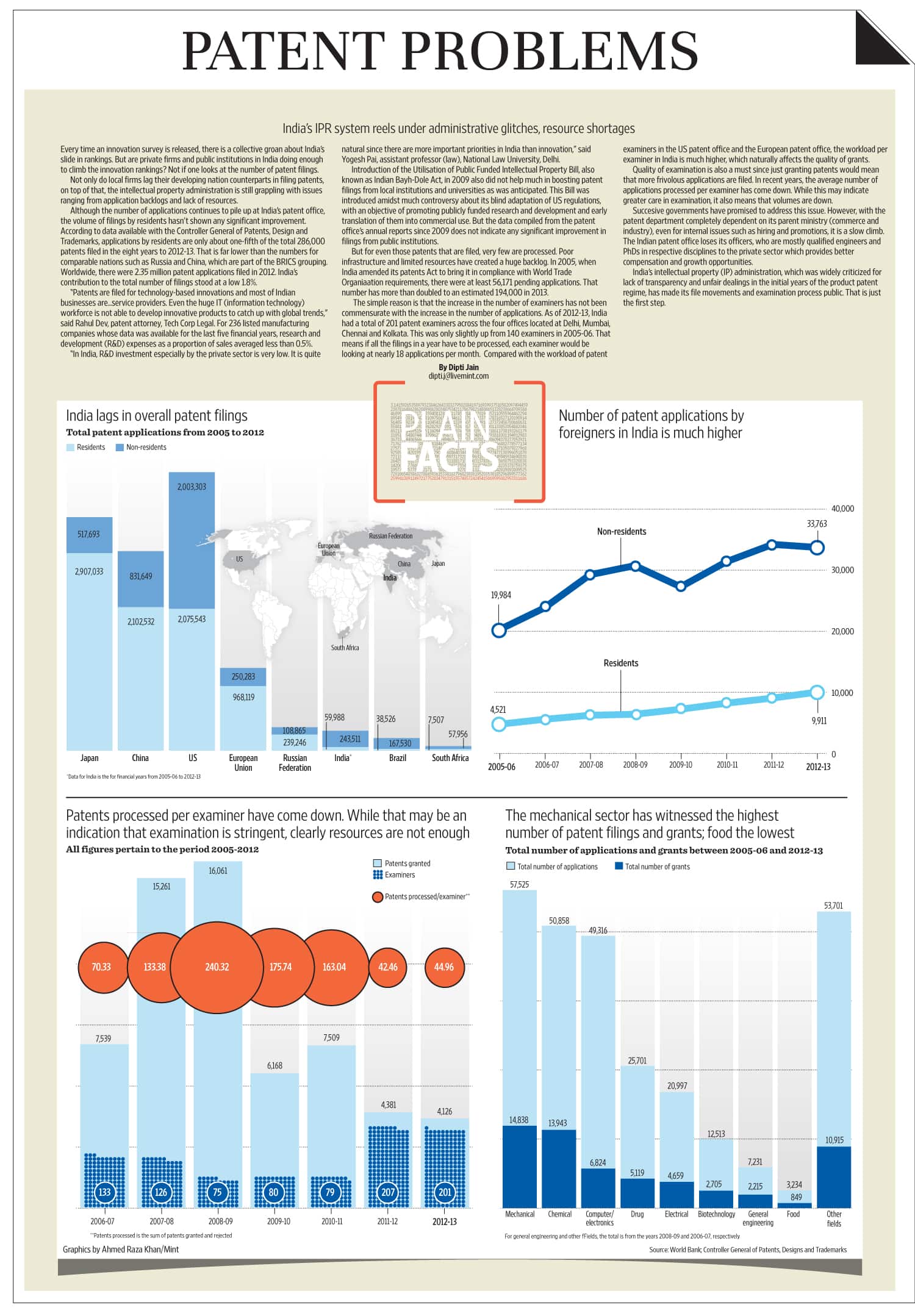 “In India, R&D investment especially by the private sector is very low. It is quite natural since there are more important priorities in India than innovation," said Yogesh Pai, assistant professor (law), National Law University, Delhi.

Introduction of the Utilisation of Public Funded Intellectual Property Bill, also known as Indian Bayh-Dole Act, in 2009 also did not help much in boosting patent filings from local institutions and universities as was anticipated. This Bill was introduced amidst much controversy about its blind adaptation of US regulations, with an objective of promoting publicly funded research and development and early translation of them into commercial use. But the data compiled from the patent office’s annual reports since 2009 does not indicate any significant improvement in filings from public institutions. But for even those patents that are filed, very few are processed.

Poor infrastructure and limited resources have created a huge backlog. In 2005, when India amended its patents Act to bring it in compliance with World Trade Organization requirements, there were at least 56,171 pending applications.

That number has more than doubled to an estimated 194,000 in 2013. The simple reason is that the increase in the number of examiners has not been commensurate with the increase in the number of applications. As of 2012-13, India had a total of 201 patent examiners across the four offices located at Delhi, Mumbai, Chennai and Kolkata. This was only slightly up from 140 examiners in 2005-06. That means if all the filings in a year have to be processed, each examiner would be looking at nearly 18 applications per month.

Compared with the workload of patent examiners in the US patent office and the European patent office, the workload per examiner in India is much higher, which naturally affects the quality of grants. Quality of examination is also a must since just granting patents would mean that more frivolous applications are filed. In recent years, the average number of applications processed per examiner has come down. While this may indicate greater care in examination, it also means that volumes are down.

Successive governments have promised to address this issue. However, with the patent department completely dependent on its parent ministry (commerce and industry), even for internal issues such as hiring and promotions, it is a slow climb. The Indian patent office loses its officers, who are mostly qualified engineers and PhDs in respective disciplines to the private sector which provides better compensation and growth opportunities.

India’s intellectual property (IP) administration, which was widely criticized for lack of transparency and unfair dealings in the initial years of the product patent regime, has made its file movements and examination process public. That is just the first step.