Why ‘swing states’ dominate the US presidential election

Every state in the US is assigned as many electoral college votes as it has members of Congress, a formula that amplifies the importance of small states

The two main candidates—the Republican Party’s Donald Trump and the Democratic Party’s Hillary Clinton—are spending time and money in “swing states" that will decide the 8 November presidential election in the US.

That’s because the president is selected via a quirky mechanism called the electoral college, created by the nation’s founders as a compromise between those who favoured a direct popular vote and those who wanted lawmakers to pick the president.

Every state is assigned as many electoral college votes as it has members of Congress, a formula that amplifies the importance of small states.

In the early 19th century, states seeking to maximize their impact adopted a winner-take-all approach that awards all their electoral votes to whichever candidate wins the most votes in that state on election day. (Maine and Nebraska are the only exceptions.) 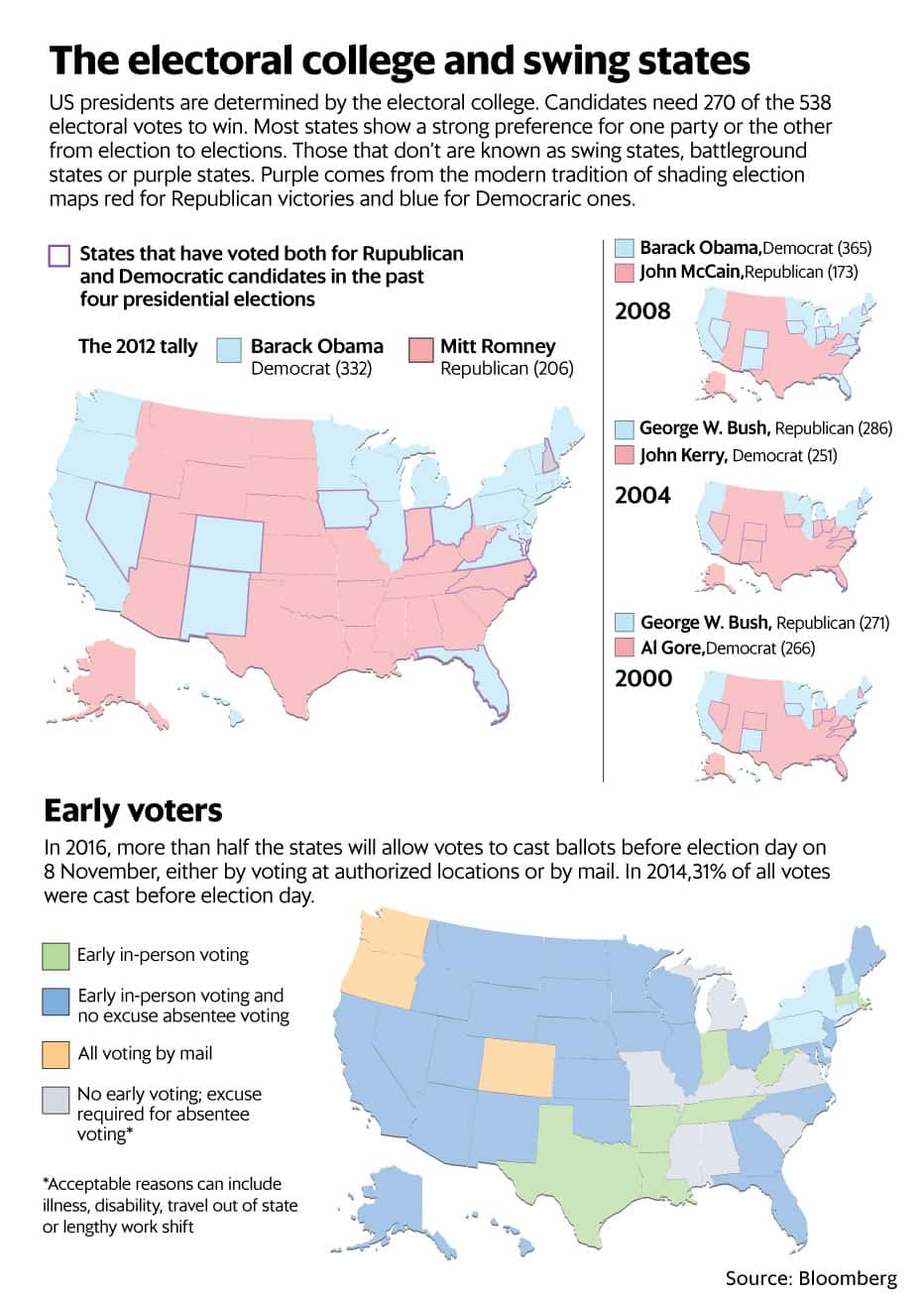 The electoral votes of many states—including reliably Democratic California or Republican Texas—can be taken for granted. So the vote normally comes down to whether states such as Florida, Ohio and North Carolina favour the Democrat or the Republican. In this unusual election, there are more “battleground" states—including Arizona and Pennsylvania—that are being closely watched to see if they might switch sides.

The US has had an elected president since its constitution went into effect in 1789. The contest is held every four years on a Tuesday in November.

Since Abraham Lincoln won the job in 1860, all presidents have been members of the Republican or Democratic parties. Third-party candidates have a hard time getting on state ballots for the November general election and have never done better than the 27.4% garnered in 1912 by former Republican president Theodore Roosevelt, then running on the Bull Moose Party ticket.

The two candidates representing the main parties on election day survive a long series of state-level primaries (votes by ballot) and caucuses (votes by show of hands or head count) held from February through June.

Then each state select delegates to send to the Democratic and Republican conventions, where they normally translate the popular votes into formal nods for their party’s November candidate. Democrats also have “superdelegates", lawmakers, governors, past presidents and national party officials who have the freedom to back any candidate, regardless of how their states voted.

In recent decades, conventions have served as made-for-TV spectacles to laud the de facto nominee and that person’s pick to be the vice-presidential running mate.

The winner-take-all system caused the electoral college to choose presidents who did not win the overall vote in 1876, 1888 and 2000, when Republican George W. Bush beat Democrat Al Gore after a weeks-long recount.

After each such election, there’s a renewed push to make the total tally of ballots decisive, but many states, especially small ones, are unwilling to switch, citing the loss of sway.

Since the early state primary elections are the most decisive, critics say that the process favours voters in rural Iowa and New Hampshire, traditionally the first two states to vote. This means urban issues get short shrift. Defenders say that small states and farm areas would otherwise be overlooked.

There’s broad agreement that money plays too big a role in campaigns. It’s estimated that each party could spend more than $1 billion by election day, most of it on advertising.

So the winners in this long process include local television stations that reap these ad dollars and the political junkies who love to watch the saga unfold.