Home / Politics / How can H1N1 vaccine be optimally distributed?
Back
Share Via

How can H1N1 vaccine be optimally distributed?

How can H1N1 vaccine be optimally distributed?

Bangalore: Flu vaccines should be first given to schoolchildren and their parents and not younger children or old people, according to new research that comes even as there is a shortage of H1N1, or swine flu, shots.

Reporting in the journal Science on Friday, an epidemiologist-mathematician team says it has developed a mathematical model of influenza transmission that analyses the best strategy for distributing vaccines among different age groups in a way that would minimize the spread of the virus. They suggest age-related patterns of transmission should be considered in vaccination distribution policies— which is currently not the case, either by the Centers for Disease Control and Prevention in Atlanta, US, or other such government agencies. 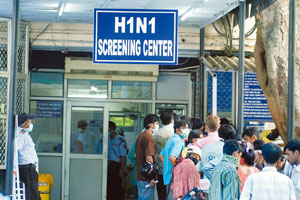 Timely procurement: A screening centre for the H1N1 virus at a New Delhi hospital. India has not yet made any purchase commitment to the three biotechnology companies developing H1N1 vaccines in the country. Ramesh Pathania / Mint

The broader point regarding the usefulness of quantitative models for making decisions on public health is valid, says Saad B. Omer, professor of global health and epidemiology at Emory University in Atlanta. But it might not be very relevant for India because the model uses European data and makes assumptions about how people intermingle; this mixing pattern could vary in India.

The authors don’t deny this limitation. “But I worry about the availability of data in countries like India," says Jan Medlock, lead author from the Yale University School of Medicine. His model has calculated that an influenza epidemic in the US could be stopped by the optimal distribution of 63 million doses of vaccines, as against the 83 million doses currently used for seasonal flu.

The model utilizes survey-based data and mortality data from historical influenza pandemics, and considers factors such as death, infection, total years of life lost and economic costs while calculating the most effective vaccination strategies. However, the crux of the model is the data on “infectious contact", which Medlock defines as “contact that can transmit flu". “It may be a close conversation or riding on the bus next to someone infected, but is probably not entering a room they were in hours ago." This information tells how long does it take people to get sick, and it may vary between countries.

Researchers say it is not difficult to collect “infectious contact" data, but virologists like Shahid Jameel at the International Centre for Genetic Engineering and Biotechnology in New Delhi are not very optimistic since India doesn’t even have the basic seasonal flu surveillance data.

In any case, the H1N1 outbreak seems to have galvanized the government machinery. Indian Council of Medical Research director general V.M. Katoch says data is being collected every day to gauge the susceptibility patterns, since, unlike in many other parts of the world, the H1N1 virus has affected all sections of society in India.

Still, the question on the minimum amount of H1N1 vaccine that India will require to protect the people on its priority list is open ended. Healthcare workers will, of course, top this list says Dr Katoch, but including others will take the number to several tens of millions.

Ironically, unlike several nations which have placed orders for H1N1 vaccines, India has not made any purchase commitment to the three Indian biotechnology companies developing H1N1 vaccines, even though some of them have made fresh investments in their manufacturing facilities owing to the H1N1 infection.

“Companies such as GlaxoSmithKline, Sanofi, MedImmune and others have bagged advance purchase orders worth billions of dollars from various governments, but we have no such commitment from the Indian government," says Krishna M. Ella, chairman and managing director of Bharat Biotech International Ltd, one of the three manufacturers identified by the government. He thinks the vaccine industry needs government support as the influenza outbreak can be quite unpredictable. “This year, it is H1N1, next year it could be H2N2."

Dr Katoch says the government is “conscious of this fact" and will ensure the “viability of the local industry".

“By next week, we will make the minimum purchase commitment," he says.