New Delhi: In 2014, after a long struggle for statehood, Telangana held its first state elections. Now it will go to the polls for the second time in what will be a referendum on K. Chandrashekar Rao (KCR), the chief minister, and his Telangana Rashtra Samithi’s (TRS’s) performance as the state’s first government.

A Mint analysis of a broad range of indicators suggests that Telangana has made significant progress over the past few years. However, it still trails Andhra Pradesh in several respects.

Between 2014 and 2018, Telangana’s economy grew significantly faster than India’s. This has pushed Telangana’s share of India’s gross domestic product (GDP) to 4.5% in 2017-18, up from 4.1% in 2014-15 and substantially more than its share in India’s population (around 3%). However, compared with Andhra Pradesh, Telangana’s growth is less remarkable. Andhra Pradesh’s economy has outpaced Telangana’s over the past three years (chart 1). 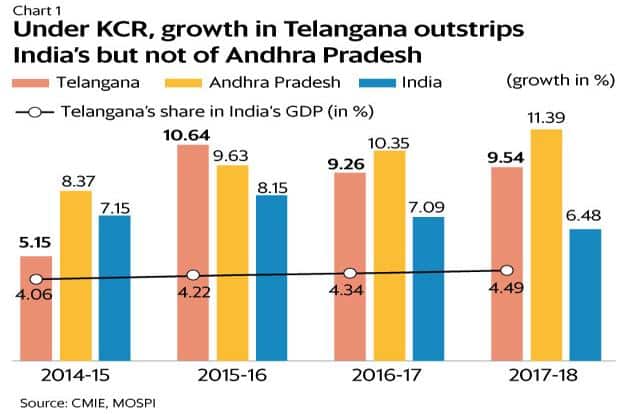 Much of Telangana’s growth has been driven by Hyderabad. The capital accounts for one-fifth of the state’s population and hosts firms crucial for both the state’s and India’s services sector.

To build on this, KCR has aggressively sought more investment.

These efforts have attracted some investment, but not as much as Andhra Pradesh. According to data from the Centre for Monitoring Indian Economy (CMIE), between 2015-16 and 2017-18, ₹ 1.06 trillion worth of new projects were announced in Telangana, around three times less than Andhra Pradesh ( ₹ 3.03 trillion worth of projects).

As a share of new projects announced in India, Andhra Pradesh has accounted for around 7% of all projects in the past three years, significantly higher than Telangana’s 3% (chart 2). The services sector may be the economic driver but agriculture is more important politically.

Nearly 55% of Telangana’s workforce relies on agriculture, according to data from Telangana’s latest socio-economic survey, and many of them farm in Telangana’s semi-arid regions, making drought a perennial challenge. Drought-induced income losses have prompted a spate of farmer suicides in recent years. One study by the Tata Institute of Social Sciences estimates that nearly 3,500 farmers took their own lives between 2014-18. To increase drought resilience, the TRS government has invested significantly in irrigation, data shows.

According to a new report from PRS Legislative Research, between 2015-19 (including budget estimates for 2018-19), the government of Telangana spent an average of 14% of its budget on irrigation (compared with the all-India average of 4.5%).

A significant amount of this money has gone into the ₹ 80,000-crore Kaleshwaram project, the largest irrigation project in India, which seeks to bring water to 1.8 million acres in the state.

The TRS government has invested heavily in other aspects of agriculture as well. Between 2015-19, average spending on agriculture has been 7.8% of the budget (compared with the all-India average of 6.2%). The highlight of this spending has been the Rythu Bandhu Scheme. Launched earlier this year, the ₹ 12,000-crore scheme gives land-owning farmers ₹ 8,000 for every acre they own. However, the scheme has been criticized for ignoring tenant farmers, a significant and vulnerable segment of agriculture workers (chart 3). TRS has also spent on the other significant vote bank in the state—scheduled castes and scheduled tribes (SC/STs)—who make up nearly one-fourth of the state’s population. Between 2015 and 2019, 8.5% of the state government’s budget was spent on SC/ST programmes, the highest proportion in India.

All this largesse is possible because of increased revenue. By losing Andhra Pradesh and retaining Hyderabad, Telangana’s government revenues received a huge fillip.

Telangana also is among the outperformers when it comes to implementing central schemes.

In Telangana, compared with the rest of India, more National Rural Employment Guarantee Act payments are made in time, more toilets have been constructed as part of the Swachh Bharat Abhiyan (SBA), and more road works completed as part of the Pradhan Mantri Gram Sadak Yojana (PMGYS).

However, in comparison with Andhra Pradesh, Telangana’s achievement does not appear extraordinary (chart 4). How will Telangana’s performance affect the polls?

In theory, a state government overseeing economic growth while implementing popular schemes for its main vote banks should ensure electoral success, but Indian politics is rarely that simple. A possible grand alliance between opposition parties and basic anti-incumbency could thwart KCR and TRS.

This is the first of a two-part data journalism series on Telangana. The next part will examine how the different sections of the state have voted in the past.