Growth of wealth gives way for growth in charity

Moving from the traditional philanthropy of large industrial houses, there is also a spurt in giving by the new rising industry sectors such as e-commerce, start-ups and IT

New Delhi: That India is a country of extreme wealth and poverty is well known. What is less known is that in recent years some of the country’s wealthiest individuals have been giving back to society to help the have-nots.

The richest of the rich—the ultra-high networth individuals (UHNIs)—hold a substantial share of the wealth in India as per Kotak Top of the Pyramid report 2016. The number of UHNI households have more than doubled in the last five years. So has their income—the combined net worth of UHNIs has been pegged at Rs135 trillion in the Kotak report.

And now it appears that the UHNIs are giving back more to society than before. 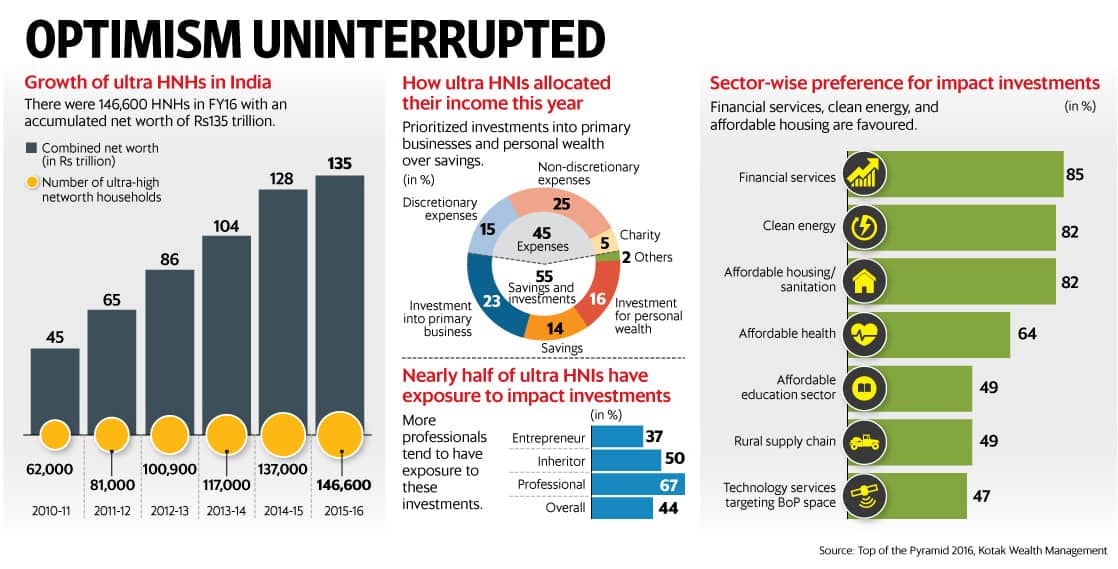 Jaideep Hansraj, head (wealth management and priority banking) at Kotak Mahindra Bank Ltd, said, “Indian UHNIs have come of age in terms of giving back to the society. There is increased awareness among UHNIs about philanthropy. UHNIs increasingly feel that they owe part of their success to the society and the supporting environment at large."

Kotak releases the top of the pyramid report every year and in FY15 it studied the philanthropic contributions of UHNIs in detail. As Hansraj pointed out, philanthropic activities have been driven by multiple reasons depending on the category of UHNIs as well as the demographic profile. The key motivator that drives philanthropy among UHNIs is a “feel good factor" in being able to create a better society. Other factors include status among peers, social pressure and taking advantage of tax benefits in some cases.

The FY16 report says that the number of UHNIs from all three categories— inheritors, entrepreneurs and professionals—are on the rise. While all three categories continue to contribute towards philanthropy, professional UHNIs are giving time and expertise along with money, something the other two do not find easy to do. The report found that UNHIs are increasing investments in the “impact investing model", where market-based solutions are found for social development issues so that those who put in money get financial returns in addition to making a positive impact on social ills.

As Pakzan Dastoor, manager advisory research at Dasra, a strategic philanthropic organization, said, “Not only has the quantum of giving increased, but givers have become more evolved in their thinking. Philanthropists are moving beyond their communities and are looking at specific social sectors and causes in a holistic manner to be able to have the best impact."

For instance, the Kotak report shows that most of the philanthropic funds from UHNIs goes towards education, health and environment, while impact investments are focused on financial services, affordable housing, sanitation and clean energy. Hansraj said these sectors are a priority because they have the potential to have an impact on overall living standards and life at large.

Moving from the traditional philanthropy of large industrial houses, there is also a spurt in giving by the new rising industry sectors like e-commerce, other start-ups and IT, said Dastoor.

She added foundations have been one of the key entities in advancing the social space in India—be it the home-grown Tata Trusts or international organizations such as MacArthur Foundation or Ford Foundation. “Foundations are looking to take a more venture philanthropy approach—taking more risks, supporting innovations on the ground, exploring innovative funding mechanisms, supporting not-for-profit organizations and social enterprises to build sustainable organizations," said Dastoor.

“Many corporates such as Bank of America India and Great Eastern Shipping are going beyond regulatory requirements of companies engaging on social issues. What’s great to see is the leaders of these businesses—Kaku Nakhate, Bharat Sheth—leading social efforts. They bring their time, business skills, experiences and networks to the table, all of which are extremely valuable in the social sector as well," she added.

Some like Amit Bhatia, founding chief executive of Impact Investors Council, an industry body representing such investors, believe more people could be encouraged to give money for social development on the impact investing model. He said India’s impact investing market is increasing—currently at $2.5 billion for direct-to-beneficiary social businesses. “India saw an investment of $508 million in the last fiscal alone and expects it to go up to $1 billion by 2020," he added. In the last six months, Bhatia said, he has met three family business offices (comprising UNHIs and HNIs) who are looking to set up impact funds. The Kotak report also shows an increase in UHNI investment in impact investing as well, with UNHIs from the entrepreneural category giving 37%, inheritors about 50% and professional UHNIs topping the list with about 67%.

Subscribe to Mint Newsletters
* Enter a valid email
* Thank you for subscribing to our newsletter.
Topics
mint-india-wire joy-of-giving-2016
First article
Close
Recommended For You
Feedback
Select your Category
Your Message
No Network
Server Issue
Internet Not Available