Kolkata: The West Bengal government formally handed over to a company, named after the Bengali scientist and academician Acharya Prafulla Chandra Roy, control of the Nayachar Island for setting up a chemical hub.

Prafulla Chandra Roy Chemical Complex (PCRCC), which will develop the chemical hub over 100 acres of land in the islands, is a joint venture between the West Bengal Industrial Development Corporation (WBIDC) and New Kolkata International Development (NKID). While WBIDC has a 49% stake in the project, the rest is held by NKID, which comprises entities such as Indonesia’s Salim Group and Universal Unitech. 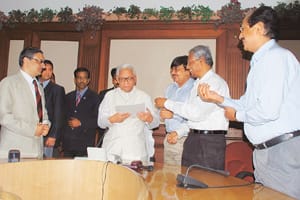 State chief minister Buddhadeb Bhattacharjee, who presided over the ceremony at Writers’ Building, said the Centre was very supportive of the project and whatever delay had happened was on the state side.

“I spoke to Ram Vilas Paswan (Union minister for chemicals and fertilizers) day before yesterday and he was very positive," Bhattacharjee said on Friday.

“We are talking to the Centre about various permissions," said industries minister Sen when asked whether the rules regarding construction within the coastal regulation zone and other statutes had been addressed.

He said the six-member expert committee led by former chairman of Oil and Natural Gas Corp., Subir Raha, will visit the island on 25 February. Nayachar is a tidal island situated on the Hooghly off the port of Haldia in East Midnapore district.

Talking about the state’s application for granting of PCPIR (petroleum, chemicals and petrochemicals investment region) status to the Haldia-Nayachar complex, state commerce and industries secretary and WBIDC chairman, Sabyasachi Sen, said, “We have already filed an application with the central government as per the PCPIR policy format and have also provided the clarifications they asked for."

Prasoon Mukherjee, chairman of Universal Success Group, one of the stakeholders of NKID, said the survey would be carried out by Singapore-based Jurong Town Co.