India is set to be the fastest growing economy in 2010, surpassing even China, according to the World Bank. Meanwhile, Mumbai dreams of becoming another Shanghai and the Bandra-Worli sea link is supposed to be one of the many steps in that direction. 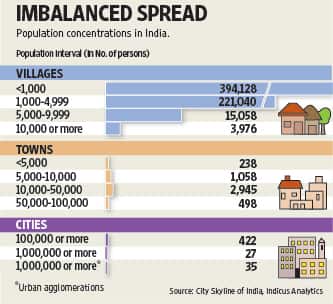 Last year, China’s urban population crossed 600 million, 46% of its population; two decades ago, people in cities comprised just 20% of the total. According to China’s ‘Blue Book of Cities’, the country has 116 metropolises, with nearly a million people in each. India has 62.

While such gigantic cities do not have to become an objective of Indian planning, there is no point in going the other extreme and romanticizing rural life. The average population in an Indian village is 1,161 persons, that is, roughly 200 households. This does not make the village economically viable as an independent entity. In fact, 91,555 of India’s villages have a population of less than 200, making provision of basic amenities a difficult and expensive proposition.

More importantly, Indian cities are characterized by some of the worst infrastructure and public services in the world. This is natural, given that we typically spend insignificant amounts to upgrade and maintain urban India.

The Jawaharlal Nehru National Urban Renewal Mission seeks to correct this problem. However, it currently covers only 60-odd large cities. India has thousands of large and small cities. While small villages are economically unviable, very large cities have their own set of problems, with concentrated pollution affecting health and life of its citizens, high land values contributing to sub-human living conditions in slums, etc. India needs to build its smaller cities, where most of its urban population will eventually reside.

Unless there is a rural-urban movement facilitated in a cohesive manner, the benefits of urbanization will be lost to the vast majority of the population. Productivity and growth of the economy will also suffer.

Southern India is the most urbanized. Incomes are, therefore, higher and development more widespread than in the north and the east.

If we rank Indian cities by per capita income, nine cities from this region come in the Top 25, seven from the western states, five from the north and four from the east.

Interestingly, India scores over China in the spread of its population and urban areas across its land area. For all its high growth, China still has a problem with regional disparity. Its eastern belt is way ahead of the interior regions and the top rich cities all lie on the coast.

India has similar problems of imbalances, but the differences are not as large. In India, the western and southern states rank much higher than the northern and the eastern ones. The top four richest cities are all south of the Vindhyas and two are from Maharashtra. They are followed by Ahmedabad, Surat and Delhi, which has the seventh highest?per?capita?income?among?cities.

Since eastern India is growing rapidly in the last few years, it is expected that more and more cities in the east will cross the small city-large city divide. Ranchi, Raipur, Dhanbad and scores of smaller urban centres are growing rapidly on the back of large-scale manufacturing investments in these areas.

However, this growth will be constrained if there is no even allocation of resources from the Centre to these cities. For India needs large cities, but even more than big cities, it needs a well spread out network of cities that will enable the rural-urban transition of workforce more effectively.

Demand Curve is a weekly column by research firm Indicus Analytics Pvt. Ltd on consumer trends and markets. Your comments are welcome atdemandcurve@livemint.com