Kerala finance minister Thomas Isaac is looking to expand a coalition of southern states to include non-BJP states in other parts of India, giving it a clear political hue

New Delhi: Kerala finance minister Thomas Isaac put together a coalition of southern states earlier this month to challenge the references of the fifteenth finance commission (FFC) which they felt were biased in favour of less developed northern states.

Now Isaac is looking to expand this coalition to include non-Bharatiya Janata Party states in other parts of India, giving it a clear political hue.

Isaac has invited the finance ministers of Delhi, Punjab, Odisha, West Bengal and Mizoram along with the southern states to a meeting in Vijaywada, Andhra Pradesh, on 7 May to discuss the potential loss of revenue due to the change in the census data year to 2011 from 1971.

States that have succeeded in controlling their population growth rate feel they will lose out, as compared to those states who have failed to do so, and are therefore lobbying against the commission’s terms of reference. The finance ministers of Kerala, Karnataka, Andhra Pradesh and Puducherry met in Thiruvanathapuram earlier this month over the issue where they pushed for a level-playing field with other states.

“We phoned Manpreet Singh Badal FM of Punjab and Manish Sisodia FM of Delhi. Both Delhi and Punjab will be participating in the Vijayawada Conclave on May 7th. Hoping that Odisha, West Bengal, Mizoram and southern States will be participating the deliberations at Vijayawada," Isaac wrote on micro-blogging site Twitter on Sunday night. 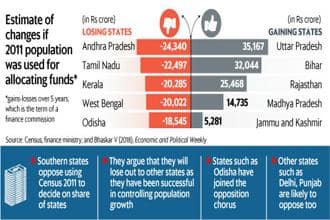 Opposition to the terms of the FFC, chaired by former revenue secretary N.K. Singh, has grown with states like Odisha voicing the fears of the southern states.

In a letter to Prime Minister Narendra Modi earlier this month, Odisha chief minister Naveen Patnaik said the mandate of using the 2011 census data instead of the 1971 census data is contrary to national population policy statements and assurances to states which have actively implemented population stabilisation measures. He argued that it will adversely impact Odisha’s share of devolution as it is already below the population replacement rate of 2.1%.

The widespread opposition has forced Prime Minister Narendra Modi to announce that the government has asked the FFC to consider incentivizing states that have worked on population control.

But southern states had countered the argument stating that the incentives will be inadequate to compensate the potential loss of revenue due to the change in the population base year.

“We should not be struck with the population issue. It is a matter of tinkering with the weightage of the various factors to ensure that better performing states do not lose out and states that need more resources can are provided with the same," said N.R. Bhanumurthy, professor at the National Institute of Public Finance and Policy.