New Delhi: The economic headwinds that unsettled Prime Minister’s Narendra Modi administration in the second quarter and at the beginning of the third, comprising a weak rupee, high crude oil price and the threat of widening current account deficit (CAD), have since abated even as a host of indicators showed a quickening of growth momentum.

The shift in the macroeconomic outlook has, however, been dramatic from the second to the third quarter, making the task of policy management that much trickier.

To the relief of finance minister Arun Jaitley, the rupee, which tumbled to 74.38 against the dollar on 11 October, losing more than 16% from the start of the year, has now clawed back to the 69-70 range. On Thursday, the domestic currency was at 70.32 against the greenback. The currency’s recovery offered immense relief to manufacturers, worried about losing their competitive edge due to costlier imported raw materials and intermediates. A weak rupee has often been a tool for opposition parties to attack the government. In a reference to Modi, Congress chief Rahul Gandhi had tweeted in August that the rupee “just gave the Supreme Leader a vote of no confidence, crashing to a historic low".

Economists said the immediate threats had receded but policymakers needed to be watchful. “The risks to the economy have now changed from short-term ones to medium-term ones," said N.R. Bhanumurthy, professor at the National Institute of Public Finance and Policy (NIPFP), a New Delhi-based think tank.

To tame the threat of a ballooning CAD fuelled by a weak currency and high crude prices, Jaitley had increased import tariffs first in September-end and then in the second week of October on non-essential items such as televisions, refrigerators, air conditioners, jet fuel and telecom gear. With crude oil, which was at over $80 a barrel in October, falling to $52.28 on Friday, the CAD situation now seems to be under control. India’s CAD had expanded to 2.9% of its national income during July-September from 2.4% in the preceding three months. In an interview broadcast by the All India Radio (AIR) on Tuesday, Jaitley said the threat of high crude oil prices on expanding CAD has receded. 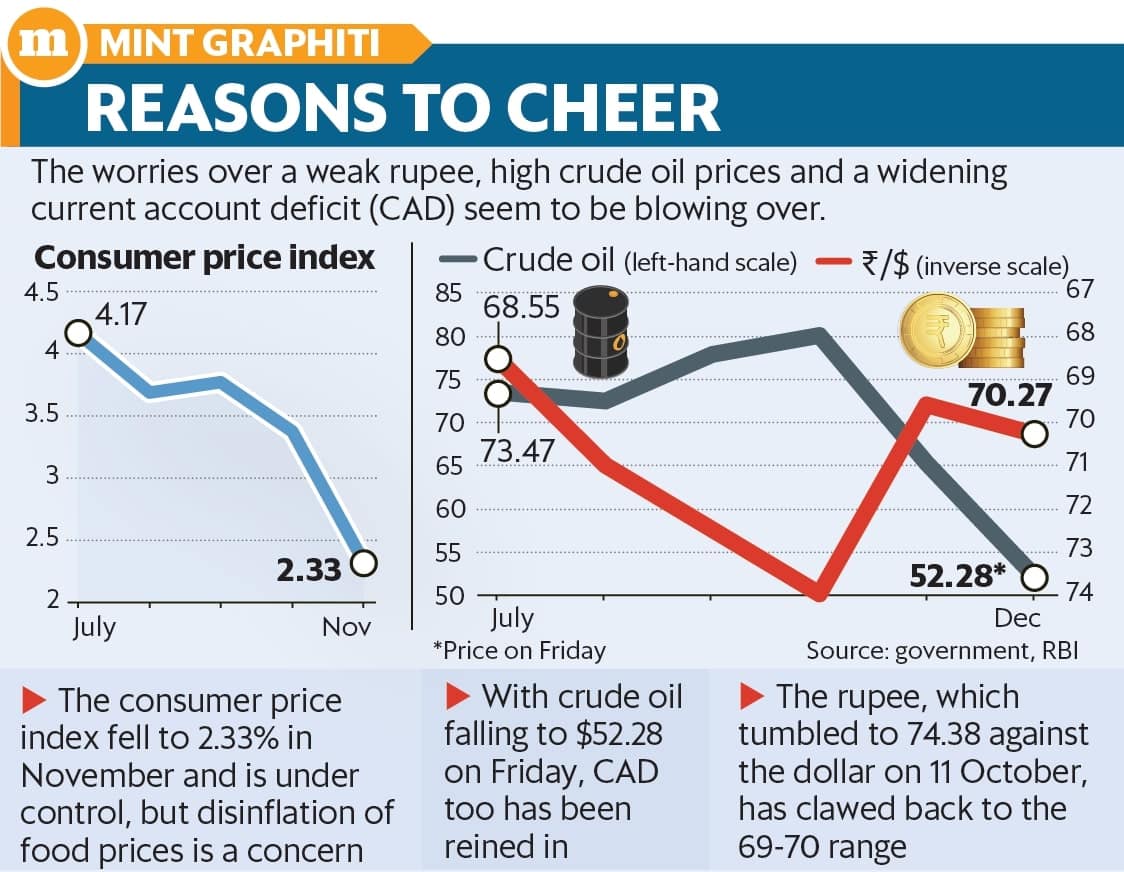 Aditi Nayar, principal economist at ratings agency Icra Ltd said the outlook for rupee and the size of CAD would continue to be influenced by the level of crude prices. “At present, we expect the FY19 CAD to be around 2.5-2.6% of GDP," said Nayar.

But a weak global oil price could also become worrisome. “Low international oil price indicating the demand-side challenges in the global economy will have implications to our services sector. This is a medium-term challenge we need to address," said Bhanumurthy at NIPFP.

Economists said the immediate threat from unfavourable macroeconomic conditions receding into the background is an opportune time to fix long-standing problems in the agrarian economy and the banking sector.

“The government is well within its rights to look at short term measures like farm loan waiver, but one should not lose sight of the macroeconomic issues. It is desirable to use the period of macroeconomic stability to consolidate the gains from reforms and take the steps needed in the agriculture and banking sectors," said Rajat Kathuria, director and chief executive of Indian Council for Research on International Economic Relations.

The 11-month high industrial output growth of 8.1% in October and the sharp jump in November of the Nikkei India composite purchasing managers’ output index pointing to the fastest expansion in private sector activity since October 2016 add to policymakers’ confidence in stable growth.

In October, bank credit growth accelerated to a five-year peak of 14.6% year-on-year from 12.5% a month ago due to a pick-up in investment demand. The Reserve Bank of India, therefore, retained its earlier forecast of 7.4% GDP growth for FY19 at its monetary policy committee meeting at the beginning of this month.