Will the love-fest stoked by Singh, Bush bear fruit?

Will the love-fest stoked by Singh, Bush bear fruit?

Hyderabad: Manmohan Singh leads the largest democracy on earth. But India’s Prime Minister is gentle of manner and speaks in whispers. One struggles to imagine him professing love without shyness to his own wife. And so it meant something when he recently laid the L-word on a little-loved man: George W. Bush. 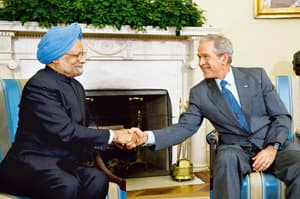 Laura Bush is not alone, after all.

Among the least coveted jobs in the world today, along with grave digging, is the task of burnishing President Bush’s foreign legacy: the complex, competing challenges of Iraq, Afghanistan, the Israel-Palestinian conflict, Iran, Venezuela, Russia, North Korea, China and what many in Europe and the developing world see as a tarnished national brand.

But love is an unpredictable thing, and it is possible that the love-fest stoked by Singh and Bush will, with time, come to be seen as President Bush’s enduring overseas accomplishment: the cultivation of India, long prickly about empires, as a partner of the sole superpower.

“The relationship with India is one of the few success stories of the Bush administration’s foreign policy," said Teresita C. Schaffer, a scholar at the Center for Strategic and International Studies in Washington, who ran the state department’s South Asia desk under the first President Bush.

George W. Bush’s critics often link his idiosyncratic temperament to his administration’s diplomatic misadventures. But among Indians, who in the main have no love for his ideology, even his critics say the traits for which Bush is so often condemned were, in India’s case, benignly applied: his penchant for unilateral deeds, and his moral conviction that democracies are simply better than non-democracies.

“Mr Bush is driven by ideology and instincts, not by nuanced thinking," said Ashutosh Varshney, a political scientist and South Asia expert at Brown University. “Bush’s ideology convinced him that, of the two rising stars on the world stage, India was preferable." (The other is, of course, China.)

Eight years ago, Bush inherited a peculiar relationship with India: a natural partnership in theory that was in practice unnaturally fraught. Despite their being multi-ethnic and multi-religious democracies with an entrepreneurial streak, the two countries had drifted apart during the Cold War, and nuclear politics remained an irritant.

When there was a Soviet Union, India was loosely in its orbit, while America’s fierce anti-Communism drove it towards Pakistan, India’s arch-rival. When India conducted a nuclear test, in 1974, a chilled relationship became cooler still, as the US blacklisted its civilian nuclear energy programme and slapped restrictions on its imports of essential dual-use technologies.

In July 2006, 15 years after the Soviet Union collapsed and five years after terrorists became America’s principal enemy, Bush decisively reversed course. Raising India to the status of a strategic ally, he cut a unique exception in the global non-proliferation regime, proposing that India be allowed to keep its military stockpile even as it gained access to technologies and fuel for its civilian reactors.

Over the next two years, Bush used dwindling political capital to get the deal approved by Congress and foreign governments. When Pakistan requested a similar pact, it was told such deals were reserved for “responsible" states.

This was the diplomacy of the grand gesture, and when this barrier fell others followed. The American and Indian militaries increased joint exercises. They exchanged trade delegations. Their companies won expanded access to the other’s markets. American officials began to talk up India as a rising great power in a new century.

Gautam Adhikari, the editorial page editor of The Times of India, said the turnaround was “on par with the turnaround in US-China ties brought about by Nixon starting in 1972".

In America, the sentiment was echoed by R. Nicholas Burns, who retired last year as secretary of state Condoleezza Rice’s right-hand man, “Within 20 years, the rise of the new US-India partnership will be considered among the most important developments in US foreign policy in our time."

As President-elect Barack Obama prepares to take office this month, he has avoided the fawning praise of India that has become fashionable in some Washington circles. But experts on the region say that India-US ties now have a momentum of their own. Industries in each country now have a vested interest in deepening ties with their counterparts.

“In 20 years, I expect the Indo-US relationship to resemble the Israel-US relationship, and for many of the same reasons," said Shashi Tharoor, an Indian writer and former undersecretary general of the United Nations.

But this new focus on India is also potentially dangerous for the world, because it neglects Pakistan and its quest to grow the ranks of its relatively Western-oriented middle class. Stephen P. Cohen, a senior fellow at the Brookings Institution in Washington, cited America’s refusal to grant tariff relief to Pakistani textiles—a small measure, compared with the nuclear deal—that he said would have helped to raise the opportunity cost of terrorism in Pakistan.

“Helping India while ignoring the pathological developments in Pakistan was no favour to India, let alone Pakistan," Cohen said.

Within India itself, the closer ties to America have actually complicated the effort to develop India’s economy. American trade policy, which has given Indian software engineers easy access to the American market while keeping out destitute Indian farmers, has provoked much anger in India. That anger strengthens the hand of populist leaders who tap anti-American sentiment to block free-market policies.

And yet the opening of India is regarded on the whole, by a great many Indians, as a Bush triumph, one whose prescience will fully reveal itself only in time—that is, if India grows into its assigned role as a new leader of a changed free world.

For Americans, days away from a new political era, this may seem a time of renewal. And it may turn out that India will simply join America, as Japan has, as a solid democratic ally in Asia. But, with the financial crisis raging and the National Intelligence Council recently conjuring a 2025 scenario called A World Without the West, there is the real, if fainter, prospect of a more fundamental turning: of an American decline that would give India’s rise its greatest significance.

When empires wane, they live on, as the political scientist David Singh Grewal has argued, by embedding their values, systems and standards in a presumptive heir, as ancient Greece did through Rome and as Britain has done through the US. Should it falter in due course, might America achieve the same through India—the preservation at least of the American idea and way of life?

That is implied in a cherished vision here—that if India does become as dynamic and powerful as China, then democracy, multi-culturalism and the rule of law will continue to have a forceful champion, with or without America. So will free expression, irreverent newspapers, separation of powers, elections that actually oust people, the English language as the medium of business, movies that end happily, reality television and the bedrock belief that the best things in a society happen uncoordinated on its streets rather than in its central committee.

Many Indians believe they are the heirs to this tradition, that it is their special destiny to be a new America. It might be an empty boast; but it might not. And in case it isn’t, Bush will be able to claim credit: for championing that new power before it was fashionable and, ironically, in the view from here, for clearing its path by squandering much of his own country’s carefully accrued sway.