Buenos Aires: India, at the head of a large bloc of developing nations, insisted that a gathering of the world’s trade ministers that opened in Buenos Aires on Sunday find a permanent solution on public stockholding for food security but showed flexibility on a work programme for services.

In the coming days, trade minister Suresh Prabhu, who is leading a multi-ministry delegation to the 11th ministerial conference of the World Trade Organization (MC11), will also focus on protecting the interests of India’s artisanal fishermen from a proposal to eliminate fisheries subsidies. India is also likely to resist any attempt by developed countries to push for negotiations on setting global rules on e-commerce, holding that domestic rules on the matter are in a flux. The meeting in the Argentinian capital follows two other “ministerials" where India played hardball on the matter of public procurement for subsidized food distribution programme—India’s is the largest in the world—against developed countries that want penalties for countries that exceed a ceiling. 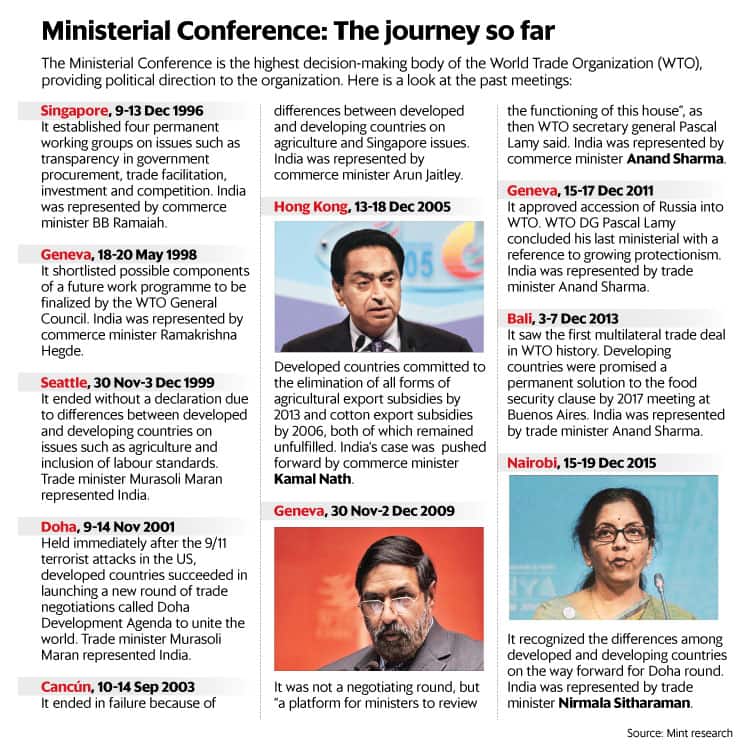 In 2013, the Bali ministerial in 2013 brought mixed results for India—a “peace clause" on public stockholding for food security purposes offered temporary reprieve from being challenged at the WTO for violations of public procurement ceilings. But the Nairobi WTO ministerial in 2015 was considered a setback as in their joint declaration, ministers for the first time recognized the divergence between developed and developing countries on pushing on with the Doha Development Agenda, which came against India’s wishes. The decision was considered by trade experts as one more nail in the coffin of the languishing Doha trade deal that is positioned to help developing and least developed countries export more to developed countries and to ensure that they benefit from world trade rules.

Indian trade officials speaking under condition of anonymity on Sunday said India is open to WTO finalizing a work programme on services which includes parts of its earlier proposal of trade facilitation in services (TFS). India had aborted its plan to push for TFS in MC11 as its traditional African allies were opposed to it. While developed countries want to negotiate domestic regulations in services, India says some parts of the TFS such as the movement of professionals and qualification requirements for procedures, that the African group is not opposed to can be included in a work programme. Issues like visa fees which are redlines for the US, could be excluded, India argues.

On the proposal to eliminate fisheries subsidies that contribute to illegal, unreported and unregulated (IUU) fishing, India is open to an agreement at Buenos Aires if the principle of “special and differential treatment" is protected, allowing developing countries a longer stretch of time for compliance—with protection for small and marginal fishermen.

However, given the reluctance of the US under the Donald Trump administration to constructively engage at the multilateral trade forum and its obstruction in appointing judges to the appellate body under WTO’s dispute settlement mechanism, most countries have lowered their expectations of the 10-13 December meeting yielding any significant outcomes.

“While the US is clear what it does not want, it is not clear about what it wants. It has said that it does not expect any negotiating mandate at the MC11," the trade ministry official cited earlier said.

WTO director-general Roberto Azevedo in a statement to journalists on Saturday said prospects for progress on specific issues in Buenos Aires remain unclear. “Members remain divided on many issues. Ministers may seek to reach agreement where possible, or commit to launching work programmes to take work forward. So we must keep making progress. We will harvest whatever we can in Buenos Aires, and lay the groundwork for further successes in future," he added.

Asit Ranjan Mishra is at Buenos Aires at the invitation of India’s commerce ministry to cover MC11.