However, the recent measures announced by the government and the central bank could stem the demand for gold and narrow the deficit in the coming months, said economists.

Trade deficit, or the difference between merchandise exports and imports, rose to $20.1 billion in May, from $17.8 billion in April and $16.9 billion in the year-ago period. 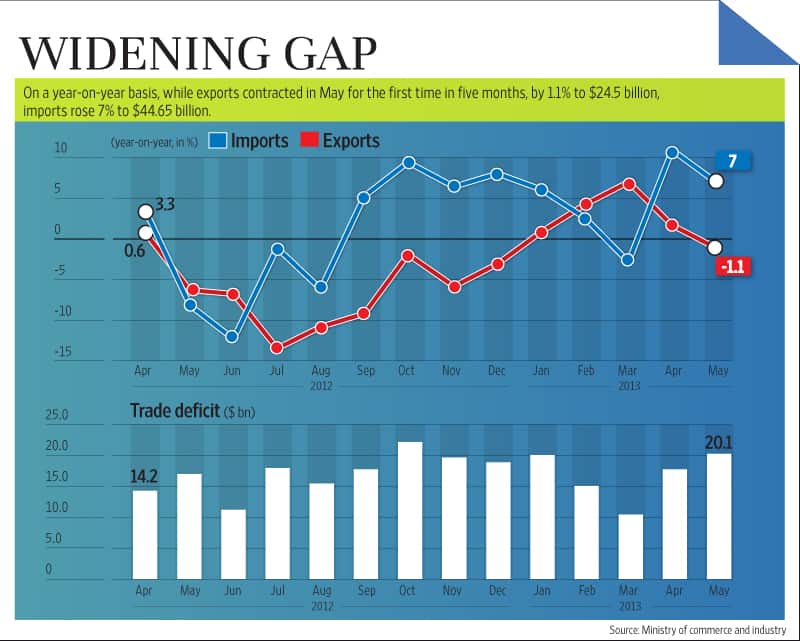 Imports of petroleum products were up 3% at $15 billion.

India has been struggling to control its rising current account deficit, or CAD, which rose to a record 6.7% of gross domestic product in the third quarter of 2012-13, increasing the country’s vulnerability to external shocks.

The full-year number, to be released on 28 June, is likely to be higher than 5% of gross domestic product (GDP).

The high current account deficit has been exerting pressure on the rupee, which ensured that the Reserve Bank of India did not lower key policy rates in its monetary policy review on Monday despite a benign inflation number.

The domestic currency has weakened by 6.6% since 22 May as foreign institutional investors pulled out funds on fear of the US Federal Reserve tapering its quantitative easing measures.

The only way to contain CAD is to increase the domestic production of oil and coal and restrain the consumption of gold, finance minister P. Chidambaram said at a meeting of his ministry’s parliamentary consultative committee on Monday.

Pointing out that India depends heavily on imports for items such as oil, coal and gold, he said it is important for the country to finance the deficit through inflows than by drawing down foreign exchange reserves.

The government was able to finance the CAD and add around $3 billion to foreign exchange reserves in 2012-13, he said.

The government and the Reserve Bank of India have taken a number of steps to reduce gold imports, including increasing the import duty to 8%, the third increase in less than two years and making it difficult for banks and other agencies to import the precious metal.

These steps are likely to yield results from June.

Exports contracted in May, largely because of restrictions on gold trading in special economic zones, he said.

The weakness in the European markets also affected export growth.

The Directorate General of Foreign Trade made it mandatory for gold units in such zones to have a minimum value addition of 3% in gold jewellery being exported and 5% in gold and precious stone studded jewellery from 1 May.

Prior to this, the value addition norm was not applicable for exports from special economic zones (SEZs).

Rao said exports should bounce back as gold trading activities have started again in SEZs.

The trade deficit should come down in the months ahead as gold imports moderate and exports stabilize, said D.K. Joshi, chief economist at rating agency Crisil Ltd.

“Inflation is moderating. So the demand for gold as a hedge against inflation will come down. The measures taken by the government and central bank will also start showing results," he said. “Overall, given a weak domestic industrial output and lower oil prices, import growth will not be very high in the coming months."

Reuters and PTI contributed to this story.