Home >Politics >News >Finmin agrees to give 19.9% stake in DMICDC to Hudco

Finmin agrees to give 19.9% stake in DMICDC to Hudco

Finmin agrees to give 19.9% stake in DMICDC to Hudco

Under the present structure of DMICDC, which was incorporated in January 2008, the government holds a 49% stake in the special purpose vehicle (SPV), Infrastructure Leasing and Financial Services Ltd (IL&FS) 41% and Infrastructure Development Finance Co. Ltd (IDFC) the balance 10%. 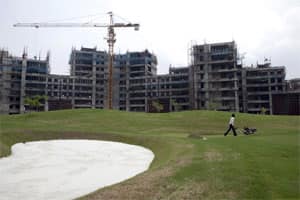 A township being built. Photo: Bloomberg

DMICDC acts as an intermediary for the purpose of development and establishment of infrastructure projects and facilities in the industrial corridor through developing and disseminating appropriate financial instruments, negotiating loans and advances of all nature, and formulating schemes for the mobilization of resources and extension of credit for infrastructure.

As part of the restructuring cleared by the finance ministry, India Infrastructure Finance Co. Ltd will hold a 4.1% stake and Life Insurance Corporation of India will get a 1% share in the corporation. The finance ministry has also cleared a proposal to allocate a 26% stake to the Japanese state-owned agency Japan Bank for International Cooperation (JBIC).

A government official involved in the process said a cabinet proposal related to the restructured DMICDC may be moved soon. He said Hudco is being given a large stake because of its long experience in urban development.

V.P. Baligar, chairman and managing director of Hudco, said he is not aware of the final decision on the stake to be allotted to the entity. However, Baligar said Hudco is keenly interested in DMICDC as it will undertake the government’s biggest urbanization project.

“This opens up new avenues of township development for us, especially in western India. The future lies there," he said.

DMICDC proposes to develop what it calls self-sustainable smart cities on either side of the 1,483km-long western dedicated rail freight corridor between Dadri in Uttar Pradesh and Jawaharlal Nehru Port Trust in Navi Mumbai.

DMIC will run across six states—Uttar Pradesh, Haryana, Madhya Pradesh, Rajasthan, Gujarat and Maharashtra—and a majority of the projects in the corridor are envisaged to be implemented through public-private partnerships. It is touted to be the largest infrastructure project in the world, with an estimated $90-100 billion (Rs 5.14-5.72 trillion today) required only to set up the infrastructure over the next 30 years.

Japan has agreed to lend $4.5 billion to the DMIC project. JBIC will lend $3 billion, while another $1.5 billion will be provided through official development assistance by the Japan International Cooperation Agency (JICA) over five years.

Mint reported on 21 June that the Japanese government has asked India to allow its state-owned agencies to lend in Indian rupees. This is being examined by a committee headed by economic affairs secretary R. Gopalan.