Thanks for Visiting Mint
You seem to have an Ad Blocker on. Please turn it off in order to continue, or whitelist Mint
HOW TO TURN OFF AD BLOCKER
OR
REFRESH IF YOU ALREADY TURNED OFF THE AD BLOCKER
Home >Politics >News >NCP continues to put pressure on Congress

New Delhi/Mumbai: The Nationalist Congress Party (NCP), a constituent of the ruling United Progressive Alliance (UPA), continued to ratchet up the pressure on its dominant partner, the Congress, over what analysts see as issues related to Maharashtra, where the two together control the state government. 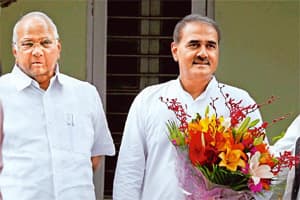 Analysts say the Congress is also keen to mollify its partner ahead of the next general election scheduled for 2014. The party continued to put up a brave front.

“In coalitions, these kind of developments keep happening. There is no issue that cannot be resolved through dialogues," Congress general secretary Janardhan Dwivedi said.

On the day a united UPA voted for Pranab Mukherjee in the presidential election, Pawar wrote to Singh apparently mentioning the NCP’s grievances over the functioning of the UPA, and boycotted a cabinet meeting. Both Singh and Congress president Sonia Gandhi immediately intervened and assured Pawar that the issues would be addressed.

Maharashtra state Congress president Manikrao Thakre wrote a letter to his NCP counterpart Madhukarrao Pichad and offered to call a meeting of the coordination committee to resolve the differences.

“The Maharashtra state unit president wrote to NCP saying that it was willing to convene the coordination committee (at the state level) whenever they want," said Mohan Prakash, the Congress general secretary in charge of Maharashtra.

“I have not received a letter written by Thakre yet, but I would just like to remind Thakre that I had written a letter for a coordination committee meeting almost a year back and I am still awaiting the reply on that letter," Pichad said.

The NCP, however, said it will take a decision soon. “We feel that before we take a final decision, they (NCP legislators from Maharashtra) must be taken on board, and most likely tomorrow (Tuesday) and no later than day after (Wednesday), this matter will be put to rest," Patel said.

Two Congress leaders, including one from Maharashtra, claimed the NCP had upped the ante after Maharashtra chief minister Prithviraj Chavan started looking into spending on irrigation projects.

According to them, the NCP is miffed over, among other things, Chavan’s move to bring a white paper on irrigation projects in the last decade. The irrigation ministry has been held by NCP leaders, including Ajit Pawar, the agriculture minister’s nephew, who held it till 2009. The opposition has alleged that ₹ 70,000 crore has been spent on dams, with benefits accruing to just an additional 0.1% of land.

Neither person wanted to be identified.

However, a Congress minister from the Maharashtra state cabinet said, “I don’t think chief minister Prithviraj Chavan or the state government are NCP’s target. Issues of differences are related to the Centre. NCP wants action should be taken on the agreement which was reached at the time of forming UPA-II government, like alliance partners get to nominate one person of their choice for the governor’s post, one member of Rajya Sabha appointed by the President should be of their choice. And, an additional demand seems to be giving more important portfolio to NCP president Sharad Pawar’s close confidant Praful Patel."

But the NCP knows that unless it creates an impression that the future of the Congress-led government is at stake in Maharashtra, its demands at the Centre won’t be accepted, the minister said, requesting anonymity.

B. Venkatesh Kumar, a professor of political science at the University of Mumbai, described the NCP’s behaviour as “pressure tactics".

“They may be doing it possibly to replace or rein in Chavan. Chavan has done an intelligent thing by picking up (issues in) the irrigation sector. NCP is not at all pleased with it. Chavan was trying to bring some semblance of order and governance," Kumar said.

Still, the NCP’s surprising moves could crimp the government’s newly revived reformist zeal (at least on paper), said another Congress leader, who, too, did not want to be named. Several corruption controversies and the inability to control inflation have put the UPA at the receiving end of criticism from analysts, opposition parties, the media and even industry.

According to Kumar, Pawar’s astuteness and his relationship with other regional parties could spell further trouble for the UPA.

That, he said, could mean the Congress “will be ready to give away smaller things for larger components of power".

“Pawar won’t be able to go back unless it (the Congress) accepts some of his demands," said Pratap Asbe, a political analyst and former editor of Marathi language newspaper Maharashtra Times. “Otherwise, he will have to remain firm on his stand of giving outside support to the UPA."

“A waiting game will be played by both sides till the swearing-in ceremony of Pranab Mukherjee gets over," said a state NCP leader, who declined to be named. “Both sides will try to find out who blinks first."